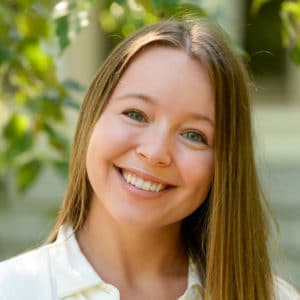 Ms. Emily Sullivan helps lead the effective delivery of Woodwell science to partners, decision makers and policymakers. She is responsible for providing strategic, tactical, and organizational support to the organization’s strategic initiatives which span the financial, technology, education, government, and consulting sectors. Through her work, and the work of the External Affairs department, Ms. Sullivan helps get Woodwell science into the world through creative, impactful partnerships which lead to real-world progress.

Prior to her role as External Affairs Manager, Ms. Sullivan worked in Woodwell’s Communications department and played a key role in the organization’s rebranding effort which launched publicly in August 2020. She also managed social media strategy and execution for the organization. Before her time at Woodwell, Ms. Sullivan worked for advertising agency Ogilvy in New York, NY. She graduated from Villanova University in 2017 with a degree in marketing and international business. Ms. Sullivan has been involved in the world of science education and communication since childhood, beginning with her role as a cast member on the PBS Kids science show Zoom in the early 2000s.