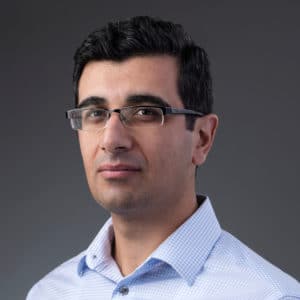 Dr. Elchin Jafarov is a computational climate and earth scientist, specializing in hydrology and the thermal physics of permafrost. He is motivated by the importance of communicating climate research to the public and uses numerical models to better understand the physical signals of warming permafrost.

Dr. Jafarov works with a terrestrial ecosystem model developed by researchers at the University of Alaska Fairbanks to better match modeled greenhouse gas fluxes with observed ones. This work will help reduce existing biases in what is known about thawing permafrost, and generate more accurate models to predict future fluxes. Dr. Jafarov believes that improving our predictive capabilities will lead to better communication around climate impacts and their implications in order to motivate action.

He began his career as an applied mathematician and then pursued geophysics. His Ph.D. research involved developing a numerical model to predict permafrost warming in Alaska over the course of a century. While in the field he witnessed the changes in the landscape firsthand and spoke to the people who were experiencing those changes in their daily lives. In his work at the National Snow and Ice Data Center, he helped to build a global-scale model of carbon fluxes from thawing permafrost. Dr. Jafarov has also worked on permafrost modeling at the Institute of Arctic and Alpine Research at the University of Colorado Boulder, and the Los Alamos National Laboratory.

Outside of climate modeling, Dr. Jafarov is interested in new technological developments in the fields of space, biology, science and the economy. He spends his free time outside, doing yoga and playing soccer.