The House of Representatives Committee on Science, Space, and Technology, held a climate science hearing on February 13, and the event was marked by a bipartisan agreement that climate change requires urgent attention.

“It’s not your imagination: extreme weather events have become more frequent in recent decades,” Francis said. “Images of floods caused by feet of rain unleashed by hurricanes Harvey and Florence, docks sitting on dry soil in California’s reservoirs, a sunken New Jersey roller coaster in the wake of Superstorm Sandy—to name only a very few—are forever etched in our memories. Yes, extreme weather has always happened, but there’s no question that it’s more vicious now, and all signs point to it getting worse.”

After a decade of contentious hearings, in which Republican members of the committee often challenged the existence of human-caused climate change, the change in tone came abruptly. As their witness, the minority Republicans invited Dr. Joseph Majkut, director of climate policy at the Niskanen Center. In 2018 Woodwell Climate signed an agreement to work with the Niskanen Center on delivering climate science to Congress.

Rep. Frank Lucas (R-Oklahoma), the senior Republican on the committee, said that a “changing climate has intensified” the impacts of droughts and heat waves. Lucas called for more federal funding for research on climate change impacts.

Committee Chairwoman Rep. Eddie Bernice Johnson (R-Texas) said that this hearing was the first of several that she would convene on climate change impacts and solutions.

Below is the full written testimony of Dr. Francis.

Video of the full hearing is available on YouTube: youtube.com/watch?v=WYSfjDSxKK0

My name is Jennifer Francis. I’m an atmospheric scientist at the [Woodwell Climate Research Center] in Massachusetts. My research focuses on the connection between climate change and extreme weather events. Thank you, Chairwoman Johnson and members of the committee, for the opportunity to testify here today. 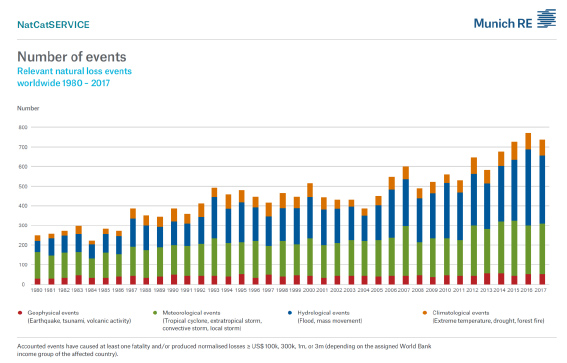 Figure 1: Number of extreme events related to weather (green, blue, and orange) and non-weather (red) events from 1980 to 2017. Compiled by Munich Re, 2018: https://natcatservice.munichre.com

Images of floods caused by feet of rain unleashed by hurricanes Harvey and Florence, docks sitting on dry soil in California’s reservoirs, a sunken New Jersey roller coaster in the wake of Superstorm Sandy – to name only a very few – are forever etched in our memories. Yes, extreme weather has always happened, but there’s no question that it’s more vicious now, and all signs point to it getting worse as the globe continues to warm under a thickening blanket of greenhouse gases.

Before I go any further, let’s clear up a few definitions that sometimes cause confusion. Climate change versus global warming: Climate change means all the ways that the climate system is changing, while global warming is just one of those ways. Climate versus weather: Climate is the average of all the weather that occurs at a particular location, while weather is the day-to-day swings in temperature and precipitation. Think of climate as your personality, while weather is your mood on any given day.

The links between climate change and extreme weather are a hot topic of scientific research. Some of the connections are straightforward and undisputed. For example, increasing global temperatures are making heat waves more intense and persistent, and therefore more deadly. As the air and oceans warm, evaporation also increases, which fuels an uptick in heavy precipitation events [Fig. 2]. 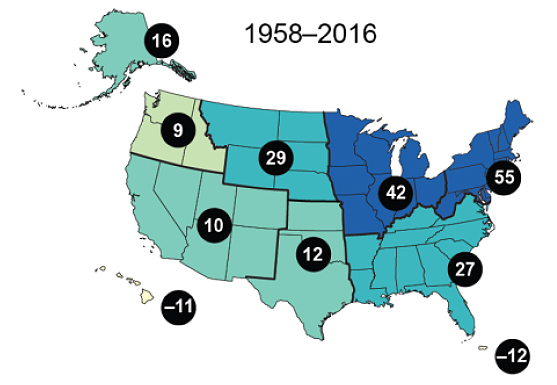 The extra moisture and warmer oceans are also fueling rapid intensification of tropical storms. Storm surges are doing more damage because sea level is higher. On a happier note, though, fewer low-temperature records are being broken. Evidence of these changes is abundant and clearly tied to a warming planet owing to human influences [Fig. 3]. 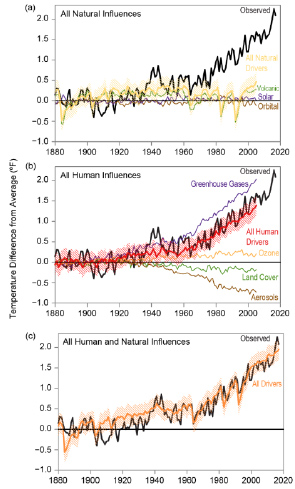 Figure 3: Climate model simulations illustrating the roles of various factors influencing global temperature changes since the late 1800s. Note that natural factors alone (top) would have caused the Earth to be in a gradual cooling cycle. From National Climate Assessment Report 2018. https://nca2018.globalchange.gov

Recent studies are uncovering a myriad of other less straightforward connections, as well. The polar vortex has been in the news a lot lately, so let’s start with winter extremes.

The true polar vortex is a pool of frigid air encircled by strong winds that sits about 30 miles above the Arctic during winter. Some evidence suggests it has been weakening and deforming more often lately1, and when that happens, extreme cold AND hot temperatures strike areas in the northern hemisphere, as is clearly apparent in temperature anomalies during the severe cold snap two weeks ago [Fig. 4]. New research suggests that rapid Arctic warming is making these vortex splits more likely2. So even though cold records are being broken less often, severe and persistent cold spells will still happen. 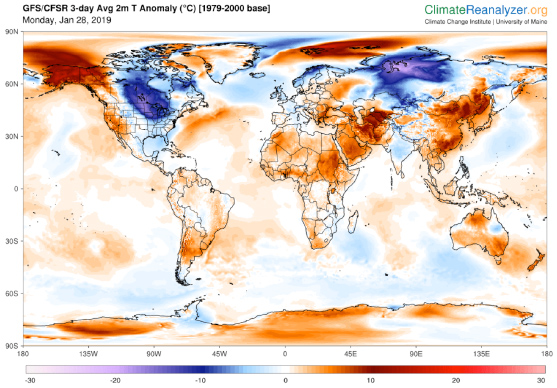 Figure 4: Global near-surface air temperature departures during the late January 2019 extreme cold spell in the Midwest. From the U. of Maine’s Climate Reanalyzer http://www.climatereanalyzer.org

Turning southward, global warming appears to be widening the tropical zone farther north and south. A symptom of this expansion is abnormal heat and drought in temperate regions such as Australia, southern California, and South Africa.

Another emerging hypothesis is related to the rapid loss of the spring snowcover over northern parts of continents. This earlier melt is causing high-latitude land areas to dry out and warm up faster, creating land temperature patterns that can trap summer weather systems in slow steering currents, making them stagnant. Studies have linked deadly summer heat waves and floods to this change in the climate3.

Finally, a complex interplay between shifting ocean temperature patterns and a rapidly warming Arctic may be favoring weather regimes that exacerbate drought, heat, and wildfires in our western states while stacking the deck toward cool and stormy conditions in the east. Remember the parade of “bomb cyclones” that struck the eastern seaboard last winter? This west/east pattern was responsible.

In a nutshell, we know that climate change has made our atmosphere warmer and wetter, which alters every weather event that happens now. But assessing how climate change may affect the track and persistence of a weather system is still a challenge. It’s relatively easy to determine that climate change made Hurricane Harvey’s rainfall more intense4, but it’s much harder to say whether Harvey would have formed in the absence of climate change, or whether climate change caused it to stall over Houston. There’s no doubt that the Arctic has warmed much faster than elsewhere, but whether Arctic air is surging southward more frequently now because of climate change is a cutting-edge research question.

This is just a sampling of the many topics being studied in our country’s universities and research laboratories, the results of which are crucial to understanding climate change impacts that will help decision-makers and each of us prepare for a future with even more intense and destructive weather extremes. Clearly more work is needed to confirm or reject these complex relationships, though many are already coming into sharp focus.

Thank you again for the opportunity to participate in this hearing.