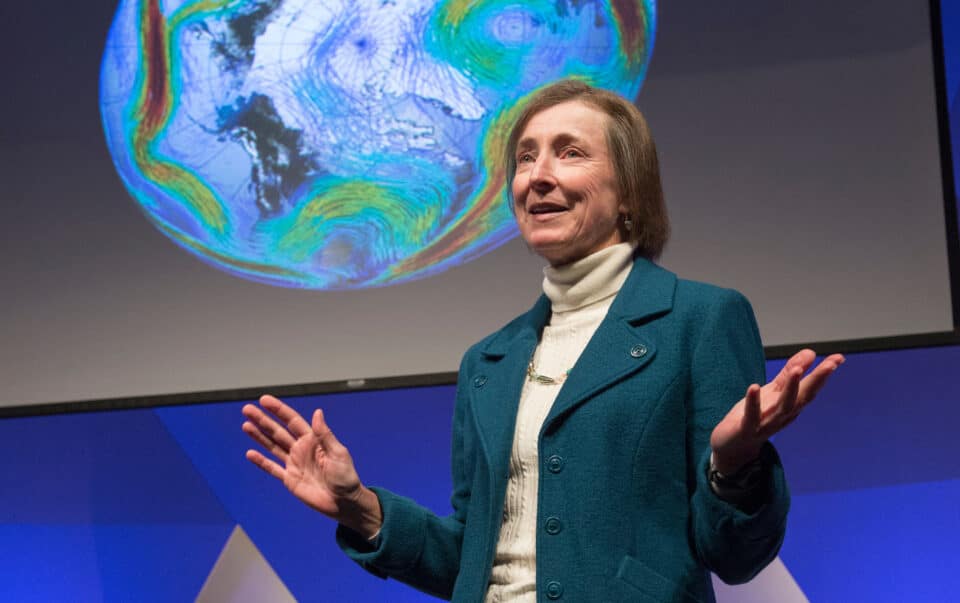 Dr. Francis presents on the connection between weather and a melting Arctic at the 2016 Arctic Matters Day hosted by The National Academy of Sciences. / photo by Risdon Photography

Before any of that, Jen Francis sailed to the Arctic.

In the early 1980s, Francis took a break from her undergraduate studies and took five years to sail a 45-foot sloop around the world with her husband.

The couple sailed from Norway to Iceland, and then planned to continue on to Greenland and down the coast of North America to Massachusetts. When they left Iceland it was mid-September, with 12 hours of daily darkness.

“Immediately we started seeing icebergs, which was unexpected and bad,” Francis said. “Not small icebergs, the size of houses. It had been a really warm, early summer in eastern Greenland. So a lot more ice than normal had broken off of the glaciers. That first night was probably the scariest part of our entire trip.”

They were forced to retreat, turning back to Iceland and eventually re-routing directly south. The detour added 6,000 miles to their trip, but Francis was hooked by the idea of better understanding weather patterns. 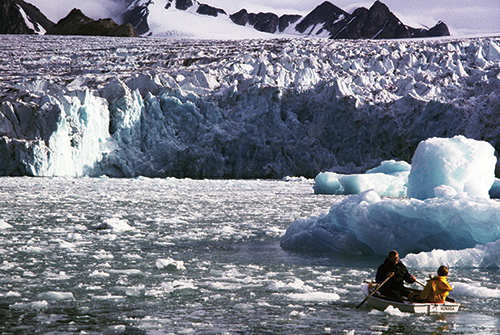 Dr. Francis and her husband in the 1980s, navigating through sea ice on the way to their boat.

Back on land, she returned to school at San Jose State University where she earned a bachelor’s degree in meteorology. She decided that she wanted to focus on research, not forecasting, and got her Ph.D. from the University of Washington.

“I’ve been studying the Arctic my entire career, really starting as an undergrad,” Francis said. “It goes back to when my husband and I sailed up the Arctic in 1984. I knew then what I wanted when I went back to school.”

Now, more than three decades later, her research is focused on unseasonably warm weather and the resulting impacts. The Arctic is warming twice as fast as the rest of the world, and Francis has zeroed in on the connection between that warming, and weather changes in mid-latitudes. The crux of her work is that a warmer Arctic disrupts the flow of air from lower latitudes toward the poles. That disruption, in turn, has disrupted and redirected the jet stream.

She joined Woodwell Climate Research Center from Rutgers University’s Institute of Marine and Coastal Sciences in September to continue this research.

“I feel like we are just scratching the surface of how a rapidly warming Arctic is affecting weather patterns at mid-latitudes. There is a lot more work to do,” Francis said. “That’s really where I plan to focus, with the ultimate goal of knowing what to expect in the future, in the next decade to four decades. That’s really the window where policymakers need to think about decisions they have to make. Decisions about infrastructure. Really expensive decisions that have to be made and they shouldn’t be made in a vacuum. They should be made with good information.”

Three years ago, Francis spoke at a Woodwell Climate public event. And in 2016, she discussed Arctic warming with a panel of Woodwell scientists on the main stage at the annual Arctic Circle conference in Reykjavik. But the news that she was joining the Woodwell Climate staff sent a buzz of excitement through the headquarters building.

“I’m absolutely thrilled to have Jen Francis at [Woodwell Climate],” said Woodwell Deputy Director Dr. Max Holmes. “I’ve greatly admired her for many years. In fact, if I had my choice of any scientist in the world to add to our staff, she’d be the one. She shows how changes in the Arctic are impacting extreme weather outside of the Arctic, including where most of us live.”

Francis’ research has received significant academic attention, but she has also broken out to a wider range of outlets.

“Not only does she do cutting-edge science, but she does a superb job of communicating her research to broad public audiences,” Holmes said.

When historically low temperatures struck the midwest of the United States earlier this year, Francis appeared on PBS’ News Hour to discuss the latest research on climate change and disruptions to the polar vortex, and was interviewed by the New York Times, the Associated Press, USA Today, the Chicago Tribune, and numerous other outlets. In 2018, she authored an op-ed in the Washington Post on the extreme weather phenomenon and was quoted in publications nationwide about record-breaking hurricanes. She has appeared on cable news and National Public Radio, and has spoke to countless audiences.

“There is the communications side that I spend a lot of my time doing, taking these complicated research results and weaving them into story,” Francis said. “I talk to media. With an event like Hurricane Michael or Hurricane Florence I probably talked to six media people every day. I do a lot of writing for more targeted journals. And I’ll talk to just about anybody. I see that as a really important aspect of my job. I didn’t plan on that. I kind of got thrown into it. But I really like it.”