Climate change is not a distant problem for the Yup’ik people on Alaska’s west coast. It’s right at their doorsteps. 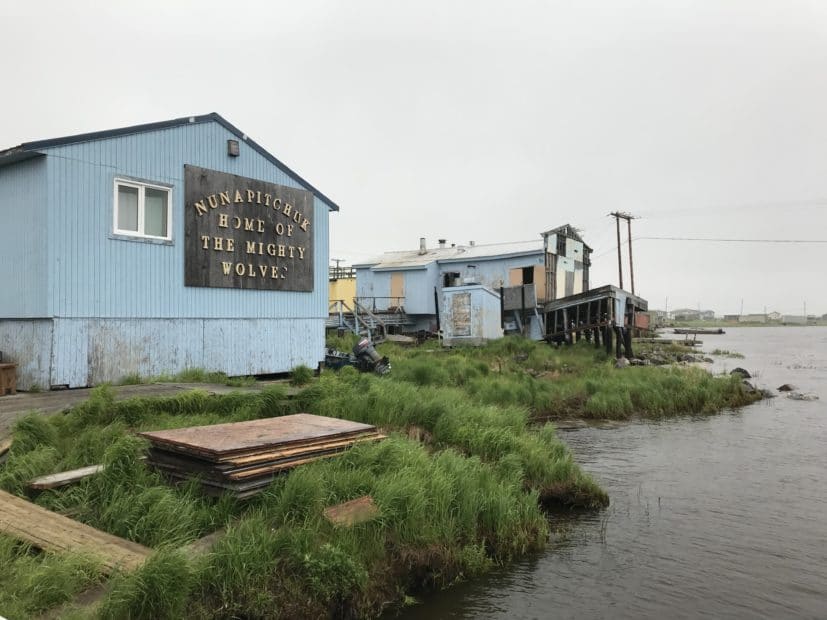 As Arctic temperatures rise at twice the global rate, the tundra is not refreezing as it did in the past and permafrost—carbon-rich frozen soil—is thawing. That thawing permafrost releases greenhouse gases to the atmosphere. Frozen permafrost contains nearly twice the amount of carbon that is currently in the atmosphere and runaway permafrost thaw could cause a dramatic increase to rising temperatures worldwide. But this thaw also causes a series of localized impacts that Yup’ik people call “usteq,” which translates roughly as “land collapse.”

In the town of Nunapitchuk, houses need to be leveled as the ground settles, and community members say they are doing this more often than in the past. People living in the many coastal communities in the Arctic are also worried about sea level rise and increased coastal erosion resulting from loss of sea ice.

For these Americans, the evidence is clear: climate change is destroying homes, community infrastructure, and cultural resources. The damage done so far is severe enough that three villages have voted to fully resettle their communities. Relocating would make them some of the first American climate refugees.

Despite this, government response has been inconsistent.

“Usteq encompasses factors that all feed back to each other,” said Woodwell Climate Research Center (formerly Woods Hole Research Center) scientist Dr. Sue Natali. “If permafrost thaws, then the ground becomes more vulnerable to erosion, and you can have the ground collapse. This in turn makes the land more vulnerable to flooding, which further exacerbates erosion and thaw.”

To help understand these changes in the Yukon-Kuskokwim Delta, Natali is working with scientists from the State of Alaska and the Alaska Institute for Justice (AIJ) to install observation systems for local community members to track coastal erosion and permafrost thaw.

“These communities have been observing the hazardous effects of climate change for so long,” Natali said. “Now they are quantifying these changes, which is critical for making informed decisions and for obtaining support for much needed action.”

There is, however, no government agency officially responsible for managing American climate change refugees. It is a concerning gap in government policy, with dire consequences for Americans who live near sea-level, according to Robin Bronen, head of the Alaskan Institute for Justice.

“If you look at coastal communities throughout the United States, you can see that what’s happening in Alaska is the harbinger of what’s coming,” Bronen said. “It’s critical that we start thinking of solutions.”

The Alaska Institute for Justice is a non-profit that advocates for Alaskan Native communities. They help tribal communities affected by climate change by organizing meetings to discuss strategies for climate resiliency and relocation. The meetings are a helpful start, but Bronen said she often hears people talk about limited resources.

“Government agencies are governed by statutes and regulations,” Bronen said. “Without those regulations saying ‘This is your work, and therefore, you can do these things,’ it makes it really hard for a government agency to step in.”

The Federal Emergency Management Agency is one group that Yup’ik communities petition for aid. In some circumstances, they do help. When hurricane-strength winds, which range from 74 to over 100 miles per hour, damage homes and public structures, FEMA can pay for repairs.

However, they are less helpful when the disaster is climate change. For example, FEMA says erosion is “a covered peril if it is caused by waves or currents of water exceeding their cyclical levels, which result in flooding.” This includes sudden floods, such as those experienced during hurricanes, but not erosion events that happen slowly, after water levels change due to sea-level rise. 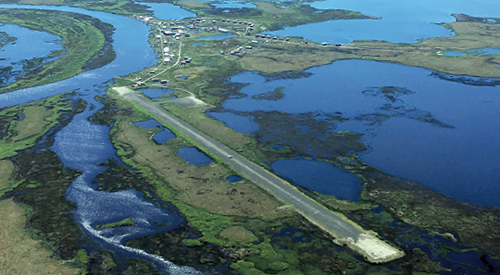 By their definition, gradual collapse of the land underneath towns like Nunapitchuk and Kwinhagak is not a disaster that FEMA is required to respond to.

“Climate change is affecting the habitability of the places where these people live, especially when extreme weather comes in and threatens people’s lives,” Bronen said. In 2017 alone, there were 42 major storms in Alaska – many with hurricane-strength winds.

One potential source of help for the people of the Arctic is the Department of Housing and Urban Development. In 2016, HUD announced $1 billion in grants to assist residents of Louisiana through projects, that made their communities resilient to the effects of climate change. This included $48 million to completely resettle the coastal community of Isle De Jean Charles, whose town was threatened by sea-level rise.

“I think it’s great,” Bronen said about the HUD relocation. “But, it’s one community. It’s still not a framework.”

Bronen doesn’t believe the Isle De Jean Charles project is one that HUD launched to create a precedent. A real commitment would be to make the issue of climate change resettlement an agency policy.

Until then, America’s climate-endangered communities hang in a dangerous gray area.

“There are going to be more and more communities affected, and at some point people will listen,” Bronen said. “But how many people are going to have to suffer before people start to listen? This is a human rights issue that’s happening in the United States.”