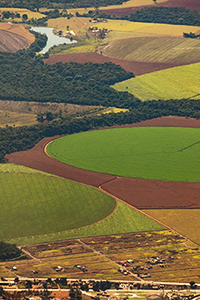 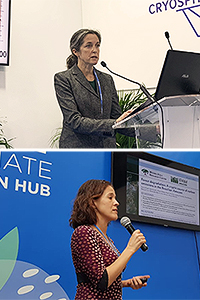 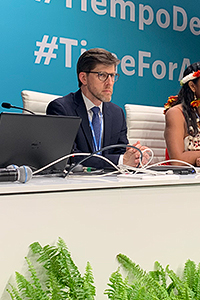 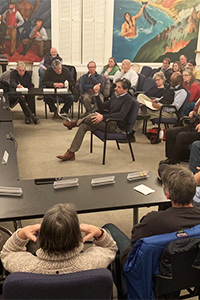 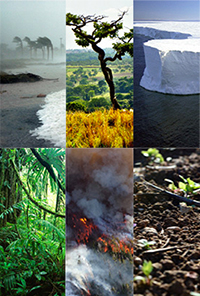 Billions of people from around the world turn to social media each day for interpersonal connection, news, and creative expression. By maintaining an active social presence, and generating quality, timely content, WHRC is building a digital community of brand ambassadors who are eager to learn about climate change, and share our science with their own networks. 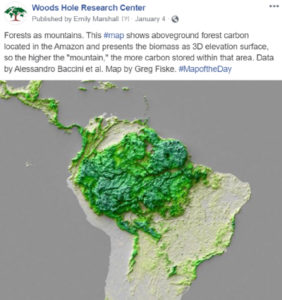 Communicating with Maps. Forests as Mountains
Based solely on metrics, this post was undeniably the most successful of 2019. This “Forests as Mountains” map features aboveground forest carbon presented as 3D elevation surface, and it reached over 300,000 social media users, more people than any other post in 2019. Maps are a powerful way to communicate our science; they’re comprehensive, beautiful, and intuitive. Our social media posts featuring maps (usually created by Woodwell Senior Geospatial Analyst Greg Fiske) were often our highest performing.

The Power of Storytelling. Life of a Scientist: Christina Minions
Storytelling communicates a message in an entertaining way; this is a valuable tactic as readers’ attention spans become shorter and shorter as our lives become increasingly inundated with content. We developed the “Life of a Scientist” series to give our audience a behind-the-scenes look at what goes into developing our world-class science. These series are told from the scientist’s point of view, and give readers an inside look at life in the field, working in rugged conditions, the logistics of transportation to remote sampling locations, etc. This particular post kicked off a series featuring Woodwell scientist Christina Minions, and her field work in Alaska. On Instagram alone, it garnered nearly 60,000 impressions. 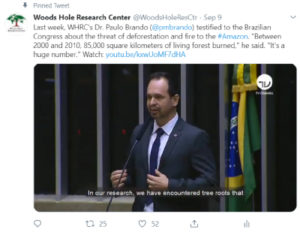 Spreading Truth. Woodwell Climate’s Dr. Paulo Brando Testifies to Brazilian Congress
A powerful function of Woodwell Climate’s social media channels in 2019 was to serve as a source of truth for our followers. In a social and political environment often cluttered with misinformation, serving as a hub for accurate, credible science is hugely valuable. Throughout the year, whether a major scientific announcement, or a pivotal political decision, social media posts were generated to quickly share Woodwell Climate’s take on the matter. One such example involved this year’s catastrophic Amazon fires. When Brazilian leadership spread misinformation about the root of the fires, our researchers were quick to provide accurate information, and the data to back it up. As a result, Woodwell Climate’s Dr. Paulo Brando was invited to testify to Brazilian Congress on the threat of deforestation in the Amazon. On social media, we shared his testimony in Portuguese and in English, to amplify his message. We pinned this post to the very top of our Twitter page, so anyone who visited our account would see this video.