Digging deeper: Learning to appreciate the complexities of the Arctic tundra

In the secret world of Arctic tundra.

As our floatplane glided over the tundra, we stared with rapt attention at the landscape passing beneath us. As a Polaris student, I had no idea what to expect when I first showed up at our field site in Alaska’s Yukon-Kuskokwim Delta. From my vantage point, the thermokarst lakes amidst the brown, flat tundra expanse created fractal patterns as far as I could see. Upon landing, these larger landscape features disappeared, replaced by what looked like a relatively homogenous, flat landscape in nearly every direction. As my fellow Polaris students and I took in our surroundings, those of us new to living in tundra landscapes commented on the lack of color: everything around us looked greenish-brown.

It took several days for my eyes to adjust to this new landscape. Removed from a world characterized by big features and a wide-ranging color palette, I had to retrain my eye to find the subtle color variations in the tundra. But once my vision had adjusted, I was struck by just how much diversity there was on a micro-scale: the white tufts of Eriophorum spp. glowed brightly from the sunken ground of tundra wetlands. I became better at noticing the small, bright reddish orange specks of cloudberries on the verge of ripening. I appreciated the different shades of green moss. It seemed like the more time we spent in the tundra, the more layers of complexity we uncovered. 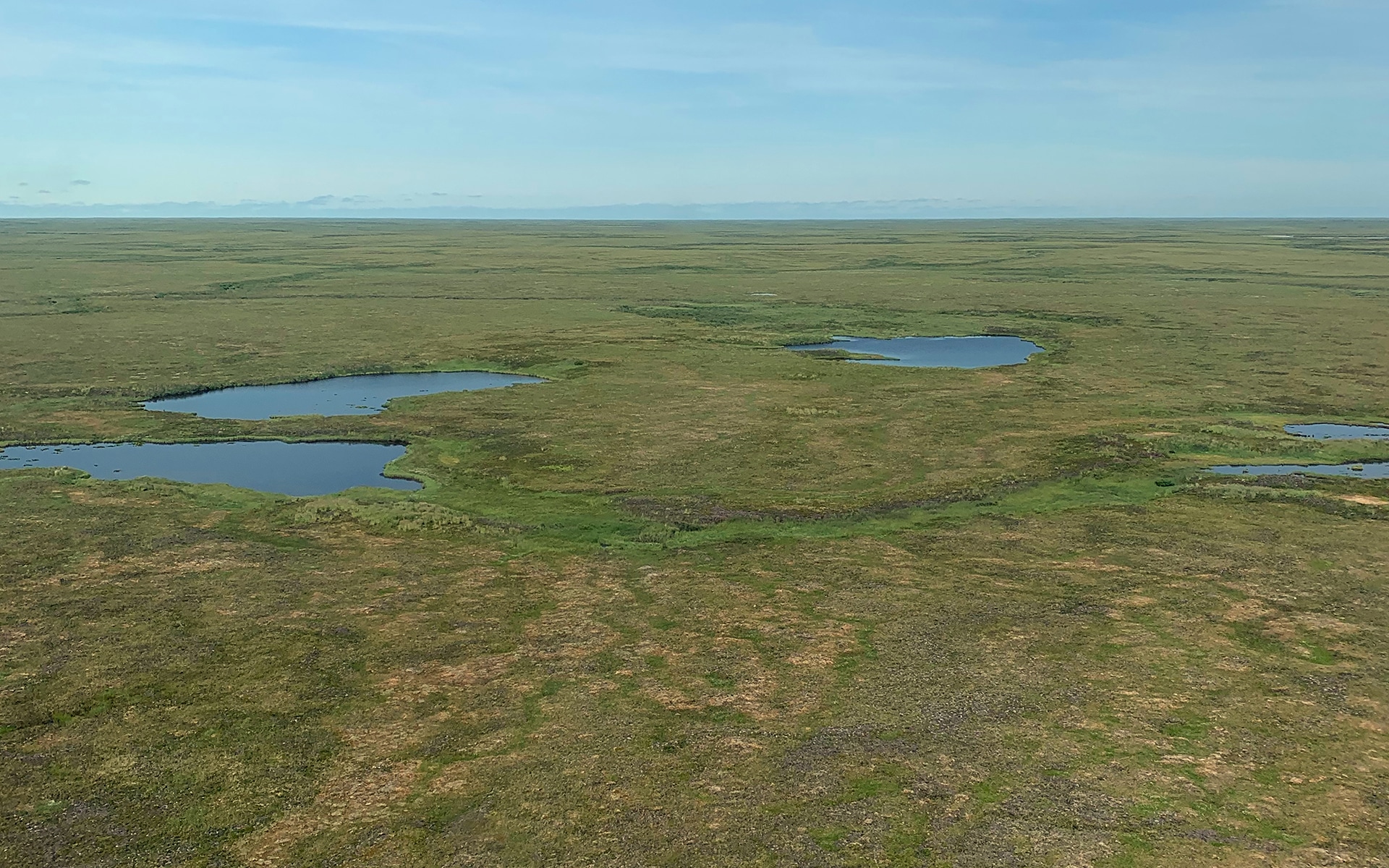 Understanding the ground beneath our feet is important to knowing what scientific questions to ask. “When you first look across [tundra] landscapes, it all seems pretty brown and unforgiving,” described Woodwell scientist Rachael Treharne, who studies disturbances linked to climate change in northern latitude ecosystems. Overtime, however, scientist’s perspectives shift as they dig in—literally—to learn more about this ecosystem.

The Arctic tundra is a region in the high latitudes of the Northern hemisphere characterized by a short growing season and low temperatures. While commonly thought of in terms of the permafrost—ground that remains frozen for the entire year – there are many more components of the tundra system. Layers of soil and vegetation overlying permafrost help control how carbon cycles through the tundra ecosystem and atmosphere. As a Polaris student, I had to learn how to navigate a landscape that is vastly different than most other places I had previously encountered. However, as we dove into our research, we became intimate with this place like no other we had known. Science helps us probe these depths in an attempt to better understand the importance of this ecosystem, and the work of science helps us to see more clearly.

Woodwell Scientist Dr. Jenny Watts studies how climate change and human disturbances impact vegetation, soils, and the carbon cycle in Arctic-Boreal regions. Sometimes her research breaks different layers of soil into numbers but this methodical compartmentation for the sake of research doesn’t always match with the actual experience of engaging with the tundra.“When you start digging [into the ground], everything is connected,” Dr. Watts explains. Thus scientists face the challenge of both breaking the tundra down into smaller systems for the purpose of research while also synthesizing research across layers to understand how elements such as carbon cycle through the entire ecosystem.

Dr. Watts describes how variation in the ground cover becomes apparent as one notices the “subtly distinct hues that blend together like watercolors.” Tundra vegetation is composed of plant species that are well-adapted to endure the cold, harsh winters, as well as the hot summers of this region.

And this layer serves the important role of a carbon sink—absorbing carbon dioxide via photosynthesis. Tundra vegetation also plays an important role in maintaining permafrost and the active layer by sheltering these layers from direct exposure to the sun. Dr. Treharne describes the importance of moss coverage, in particular: “When dry, moss can serve as a thick, insulating layer, keeping the soil beneath cool. When wet, moss can conduct heat away from the soil.” In this way, the overlying vegetation layer and its composition regulates the temperature and moisture of the soil and permafrost layers beneath it.

Woodwell researchers are discovering that the tundra vegetation layer may be impacted by climate change in a number of different ways. In certain areas, warmer temperatures year round may result in Arctic greening. In this scenario, plants may become bigger, greener, more herbaceous, and shrubby. However, warming temperatures may also result in Arctic browning (loss of vegetation cover). Dr. Treharne describes how changes in winter conditions trending toward warming can lead to large swaths of vegetation die-off in Arctic ecosystems. For example, the loss of an insulating, protective snow cover exposes vegetation to cold, dry conditions, often resulting in landscape-scale plant death. Because the system does not actually exist in distinct layers, the effects of climate change on plant life can influence the soil and permafrost layers beneath the vegetation layer.

The active layer of soil

The interconnection of layers also manifests physically: the vegetation layer extends roots down into the active layer in search of water and nutrients. The active layer of soil houses a diverse community of soil microbes that help break down organic debris. Carbon produced via plant root respiration and decomposition can be stored in the soil, cycled elsewhere, or used to fuel various processes carried out by soil microbial communities. Soil microbial communities in the active layer are also an important part of the tundra carbon cycle. These microbes work to break down organic matter (such as dead plant material) into carbon and other mineral forms of nutrients. The rate at which microbes break down organic materials depends on their environment and their access to material. “As the climate warms, soil microbes in the active layer may be able to decompose organic material faster,” explains Woodwell scientist Dr. Jonathan Sanderman, who studies carbon in soils across the world. 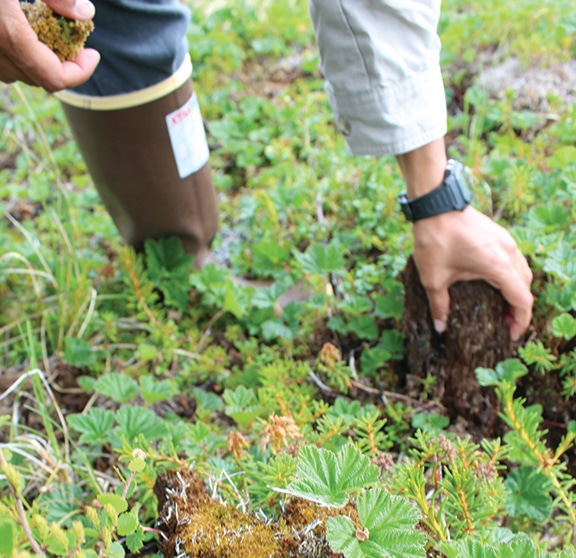 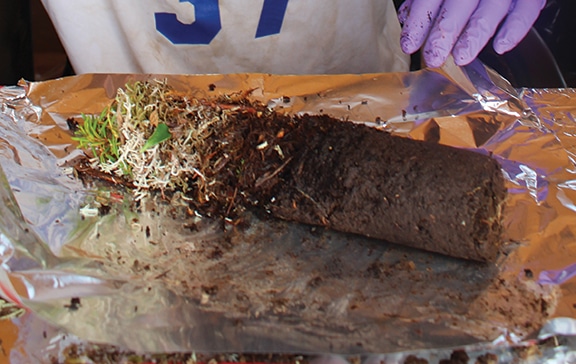 Right: A core sample including vegetation and the upper active layer of soil.

Building an understanding of the tundra ecosystem

By studying these layers and their connections, Woodwell scientists are helping to decipher the complexities of the tundra. Studying different components of this ecosystem also provides the basis for understanding the system as a whole, allowing Dr. Watts, Dr. Treharne, and Dr. Sanderman to scale up their work to examine the net effect of climate change on tundra plant life, carbon storage, carbon release, and changing water dynamics.

Though it is easiest to describe the tundra by its layers, everything is connected and we need to understand these connections to understand the ecosystem. When I think back to the experience of flying into the tundra for the first time, I can barely remember the time at which I saw the landscape as a flat, homogeneous terrain. I, and other scientists who have spent time digging in, only seek the beautiful complexity and enormous opportunity for new learning.