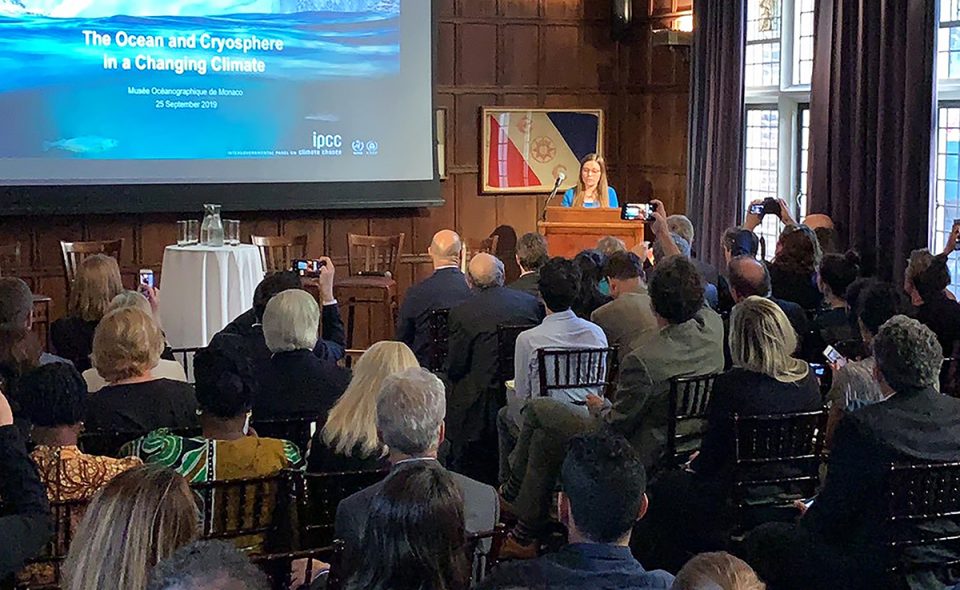 “This report is built on the science we need to guide us in adapting to a changing environment and most importantly to avert a planetary disaster,” Jakobsdóttir said about the Special Report on Oceans and Cryosphere, issued in late September by the Intergovernmental Panel on Climate Change. “The findings of the new IPCC report needs to be known—and not only known but understood—by me and all of my colleagues in governments and politics around the world.”

Jakobsdóttir was in New York for Climate Week and the United Nations General Assembly.

The IPCC report was released in Monaco on the morning of Sept 25, and Woodwell Climate helped convened a panel to discuss the report that evening in New York. The event was hosted by WHRC, the International Cryosphere Climate Initiative, and the United Nations Foundation.

The panel included three report authors, Dr. Rob DeConto from the University of Massachusetts, Dr. Ben Orlove from Columbia University, and Dr. Michael Oppenheimer from Princeton University, as well as Woodwell scientists Dr. Max Holmes and Dr. Jennifer Francis. Woodwell President Dr. Philip Duffy moderated the event, who told Jakobsdóttir that if all heads of state were “were as well informed as you, and as open to science-based policies, then we wouldn’t need to be here.”

The report said that climate change “has led to widespread shrinking of the cryosphere, with mass loss from ice sheets and glaciers, reductions in snow cover and Arctic sea ice extent and thickness, and increased permafrost temperature.”

Jakobsdóttir told the crowd that “scientists counted over 300 glaciers in Iceland in the year 2000, and 17 years later 56 of them were gone. This is a countdown to disaster.”

“We need to listen to science, and we need to act based on science, and the stakes could not be higher,” she said. “If we humans can have such a dramatic impact on the life of this plane then it is also within our powers to change course. We can accelerate the ongoing change toward clean energy, we can plant trees instead of burning forests, we can use nature-based solutions to soak up carbon from the atmosphere. The solutions are within our reach, and it is the work of politicians to grab them and to use them. We should listen to the message of science.”