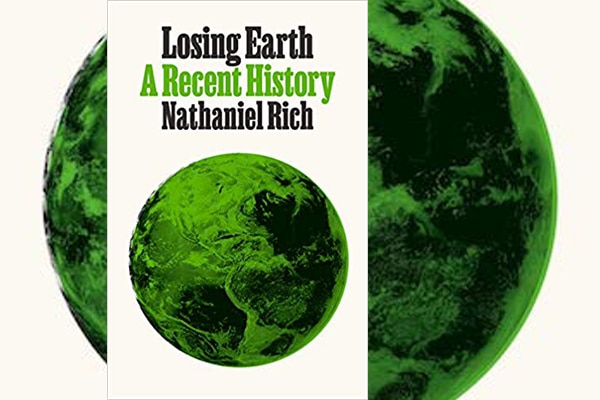 A new book is reframing the moral dimensions of climate change and Woodwell Climate Research Center (formerly Woods Hole Research Center) Senior Arctic Policy Fellow Rafe Pomerance plays a central role. Nathaniel Rich’s Losing Earth tells the story of a handful of scientists, politicians, and strategists who were among the first to try to convince the world to act on climate change – and the fossil fuel industry’s fight to stop them.

Rich first told a version of this story last summer in The New York Times Magazine. Pomerance and Woodwell Climate founder George Woodwell were featured in the article as two of the leaders who worked to raise awareness of the climate threat and to urge elected officials to take action.

The new book version of Losing Earth dives deeper into Pomerance’s story and also covers the birth of climate science denialism as part of the coal, oil and gas industries’ coordinated effort to block climate policy through misinformation, propaganda and political influence.

“One of the powerful aspects of Rich’s work is that it really gives people a sense what we knew about climate science four decades ago. This will over time only increase people’s outrage of the warming of the planet and what we have failed to do to stop it. So Rich’s history will have a big impact on the moment,” Pomerance said.

Rich has become an influential voice in the climate debate, appearing on National Public Radio and writing again in The New York Times Magazine on April 14. “Keeping warming to 1.5 degrees above historical averages was possible, [the Intergovernmental Panel on Climate Change] found, provided we immediately began to eliminate carbon-dioxide emissions,” Rich wrote. “This was terrifying only because we have not begun to do any such thing.”