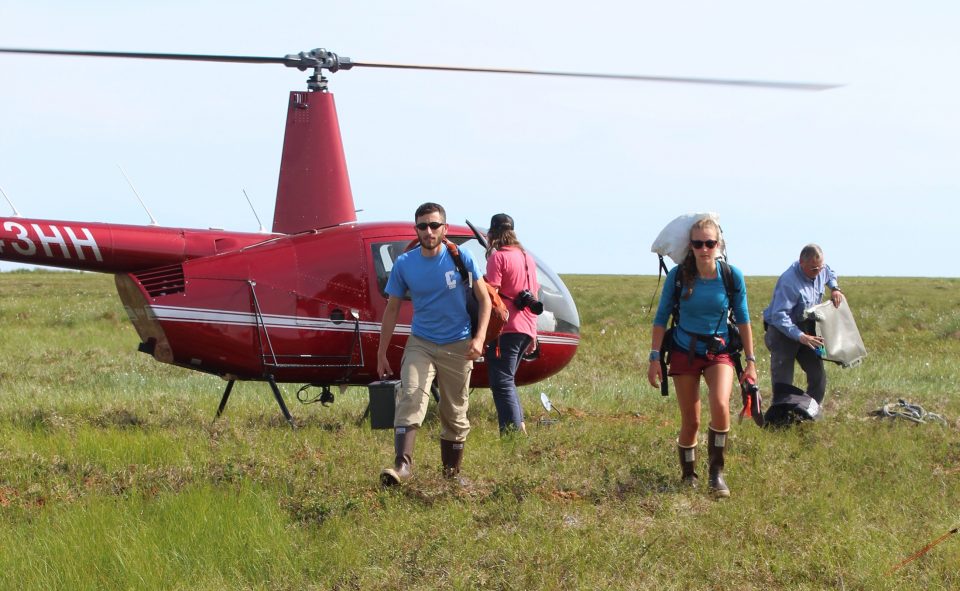 Polaris Project student researchers arriving back at base camp after a day in the field.

A team of Woodwell Climate Research Center (formerly Woods Hole Research Center) scientists and students returned this month from the 2019 Polaris Project expedition to research climate change impacts on Alaskan tundra and they reported experiencing many of the same climate-worsened problems that have made national headlines over the last week – extreme heat, strong lightning storms, and wildfire smoke.

Woodwell scientists have been traveling to Alaska’s Yukon Delta National Wildlife Refuge for the last five years. The region’s permafrost is on the brink of thawing, and will be thawed by the end of the century – if not much sooner. Polaris students, guided by Woodwell scientists, spend two weeks investigating these impacts in Alaska’s Yukon-Kuskokwim Delta, working to understand how global carbon pollution, permafrost thaw, and wildfires interact in the carbon cycle.

The team’s journey took them through Anchorage, to Bethel, and finally to the camp site about 50 miles from Bethel on the Alaskan tundra. The weather was cool and damp at the beginning of the expedition, but it soon turned hot, with temperatures hitting 90°F and continuing Bethel’s record-breaking year. Every month this year has been at least 5°F above the historic average. February was 17.3° above average, breaking the all-time record by 3.3°.

“There was also a lot of smoke from nearby wildfires at the same time as the heat, which made for very difficult working conditions,” said Dr. Sue Natali, Woodwell associate scientist and Polaris Project terrestrial research coordinator.

“Additionally, we saw signs of accelerating permafrost thaw, including massive ground collapse. In areas affected by a 2015 wildfire, thaw depths were a  meter or more, which is roughly double what we’ve seen the last couple of years. It’s alarming because globally, permafrost stores more carbon than humans have ever emitted by burning fossil fuels, and that carbon is rapidly thawing, placing it at risk of being released into the atmosphere,” Natali said.