Ambition on Melting Ice session, led by representatives from Iceland and Chile. 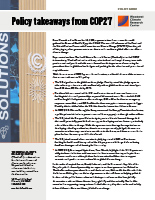 From November 6 to November 18, 2022, representatives from across the world gathered in Sharm el-Sheikh, Egypt for COP27. The annual Conference of the Parties of the United Nations Framework Convention on Climate Change (UNFCCC) has the goal of bringing together governments to accelerate and coordinate global efforts to address climate change.

Representatives from Woodwell Climate Research Center (Woodwell) attended COP27 in its entirety. Woodwell scientists with expertise in Arctic and tropical ecosystems took part in a series of panels and side events focused on the importance of accounting for permafrost thaw in global carbon budgets and pushing for the valuation and protection of tropical forests.

While the outcomes of COP27 span scales and nations, we identified some of the outcomes that are most relevant to U.S. policy.

In the realm of tropical forests, Brazil, Indonesia, and the Democratic Republic of the Congo launched a formal partnership to cooperate on forest preservation. Related to Woodwell’s work on permafrost thaw and Arctic science, Chile and Iceland launched the Ambition on Melting Ice, a coalition of governments that will focus on helping political leaders and the public better understand the impacts of snow and ice loss globally.

As countries work to address climate change globally and domestically, Woodwell is committed to supporting strong, science-backed climate policy that can be used to help inform different efforts to address global climate change.