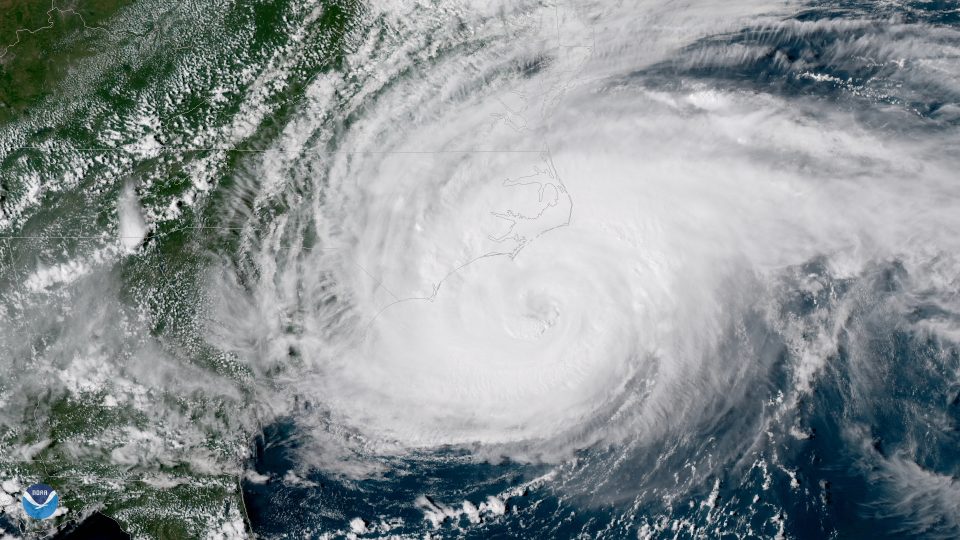 Unlike toilet paper and yeast in grocery stores these days, the main ingredients needed to cook up a busy Atlantic hurricane season are in plentiful supply. The recipe calls for lots of warm ocean water and relatively weak winds in the tropics. While the forecasts made now for summer hurricanes are far from perfect, forecasters with the best track records (such as the group at Colorado State University) agree we’ll see more storms—and more strong storms—than a normal year would bring. Just what we need, right? More bad news on top of COVID-19 woes, skyrocketing unemployment, and the ongoing climate crisis.

My friends know I’m a big fan of silver linings, and while it’s challenging to find a shiny one in this case, we can be grateful for this early heads-up so we can prepare and keep our ears tuned for Arthur, Bertha, and Cristobal, which will be the names of the first three that reach tropical-storm strength. 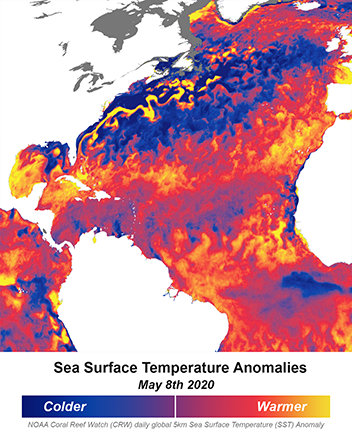 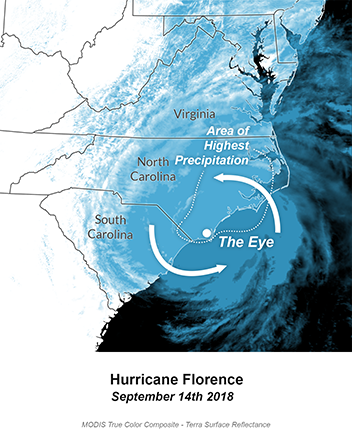 That first ingredient – warm ocean waters – is readily apparent in the map of differences-from-normal in sea-surface temperature for 8 May 2020. The swath of yellow and orange colors stretching from the Bahamas to northern Africa cover the entire zone known as the Main Development Region – where tropical storms typically form in August and September. The main fuel for hurricanes is the heat contained in the upper layer of the ocean, as well as the boosted evaporation that occurs when temperatures are high. When that evaporated water condenses into clouds in the storm, it releases energy that drives violent updrafts and thunderstorms. We can also see that the Gulf of Mexico and waters along the southeast coast are running a fever, so any storm that enters these areas or forms there will have plenty of fuel to tap into. About 90% of the heat trapped by increased greenhouse gases is absorbed by the oceans, contributing directly to these abnormal warm pools and to a 7% increase in water vapor since the 1970s.

In addition to ocean heat, another of the main ingredients for storm development is low wind shear. Shear occurs when winds in low and middle levels of the atmosphere blow at different speeds and/or directions, which inhibits storm formation and can rip an existing one apart. Strong shear tends to occur when El Niño conditions are present in the equatorial Pacific Ocean, but right now there’s no sign of El Niño — in fact, the opposite (La Niña) is expected to develop. So this year’s storms will probably not contend with a lot of shear.

While forecasts are useful for predicting the number of storms, they have much less skill in saying if and where they might strike. That said, research on landfalling probabilities is making progress. According to the CSU group, the chances of a major hurricane (Category 3 or higher) hitting the U.S. or a Caribbean country are well above average. Very recent research points to another wildcard in this story: evidence that tropical storms are now moving more slowly, and are more likely to stall. Think Hurricanes Harvey, Florence (see image below), and Dorian that wreaked havoc in the past couple of years. And bizarre tracks like Sandy that swerved westward into New Jersey are also more likely as climate change alters upper-level wind patterns that steer storms. Adding frosting to this depressing cake, we know that storms now ride on raised sea levels, so storm surges will be higher, reach farther inland, and do more damage than the same storm would have a few decades ago.

While the chefs seem well along in serving up a rough hurricane season, the dark storm clouds offer another silver lining. Research on the anatomy, health, and life cycle of tropical storms is advancing rapidly, giving us all more time to prepare when hurricane warnings go up in our communities. Scientists at the Woods Hole Research Center are at the forefront of studying how climate change is amplifying extreme weather of all sorts, and how those risks will affect our livelihoods, wellbeing, and economic opportunities.