Scientists push for inclusion of natural systems at COP25 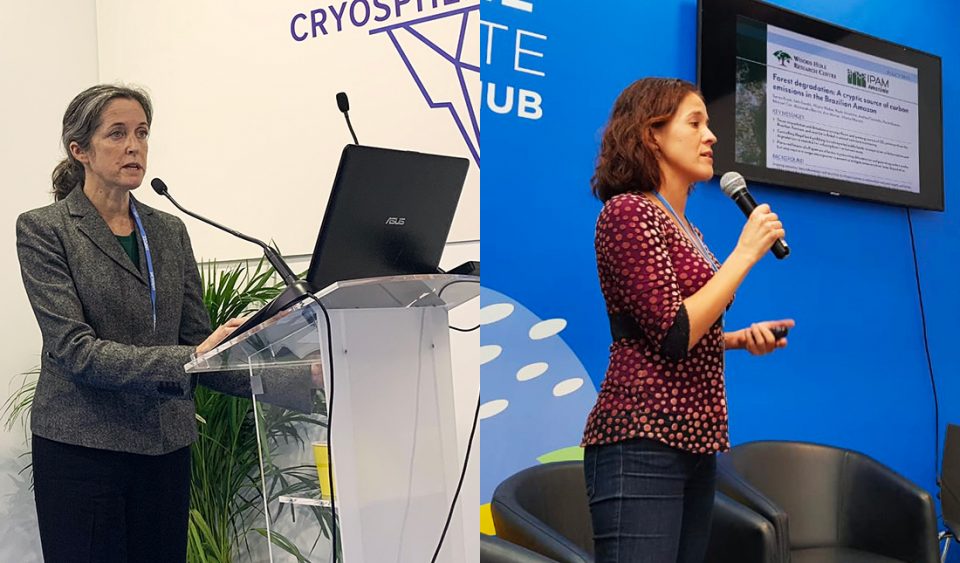 Several of the talks, and two officials side events, focused on the role of the Amazon in climate change mitigation. The Amazon forest includes an amount of carbon equivalent to ten years of global greenhouse gas emissions. Woodwell Climate research has shown that the areas of the Amazon with the most aboveground forest carbon are protected natural areas or are controlled by indigenous groups.

Dr. Marcia Macedo led three events at the Brazil Climate Action Hub, an official pavilion that was established by IPAM Amazonia and partners, after the Brazilan government declined to establish its own pavilion.

Walker spoke at two official side events about new research on the climate mitigation value of protected areas and indigenous control areas.

“As of 2016, 58 percent of carbon stored aboveground in Amazon forests was found in Indigenous Territories and Protected Natural Areas,” Walker said during a side event that included IPAM Amazonia and was co-hosted by indigenous activist group COICA.

Natali led a day of events in the Cryosphere Pavilion, dubbed Permafrost Day. Natali designed the program and the messaging for the day-long series of talks, in conjunction with Dr. Gustaf Hugelius from Stockholm University and Pam Pearson from the International Cryosphere Climate Initiative.

Several speakers called attention to the fact that emissions from permafrost regions were not being incorporated into most global climate models. Natali presented a paper by herself and Woodwell Climate’s Dr. Jennifer Watts that showed previously unmeasured winter emissions are tipping the region into a net source of carbon.

Peter spoke about her perspective as an Alaska Native and a climate change scientist, detailing the experience of local communities that are living with permafrost thaw.