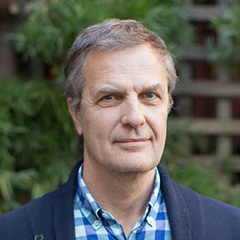 Dr. Daniel Nepstad is a tropical ecologist whose research has focused on the response of Amazon forests to climate change, fire, and land use. In 1998, he developed the Amazon Scenarios program, which simulates the future of the Amazon under a range of policy scenarios. He led Woodwell Climate’s Amazon Program and REDD initiative (focused on bringing tropical forests into the UN climate treaty) until mid-2008, when he spent a year in environmental philanthropy. Dr. Nepstad returned to Woodwell Climate Research Center to work on a global land-use strategy that lowers greenhouse gas emissions, with an initial focus on the Amazon and Brazil.

Dr. Nepstad was founding president of Woodwell Climate’s main partner in Brazil (IPAM Amazônia) and co-founder of both Aliança da Terra and the international Roundtable on Responsible Soy (RTRS). He is currently Executive Director of Earth Innovation Institute.