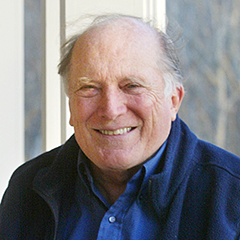 Dr. George Woodwell is the founder and director emeritus of Woodwell Climate Research Center. He has made enormous contributions to the world through his work for scientific understanding, environmental sustainability, and climate stability.

Just as important as Dr. Woodwell’s ecological research has been his willingness to raise his voice in the public debate. Among his many landmark accomplishments, his research demonstrated the damaging effects of the pesticide DDT, and he was a strong scientific voice in the push to ban it. He conducted groundbreaking research on the ecological effects of nuclear radiation, and was among the first scientists to raise the alarm on the global climate crisis.

Dr. Woodwell’s research has focused on the structure and function of natural communities and their role as segments of the biosphere. He has worked extensively in forests and estuaries in North America and has published well-known studies on the ecological effects of ionizing radiation and the circulation and effects of pesticides and other toxins. He has, for many years, studied the biotic interactions associated with the warming of the earth. 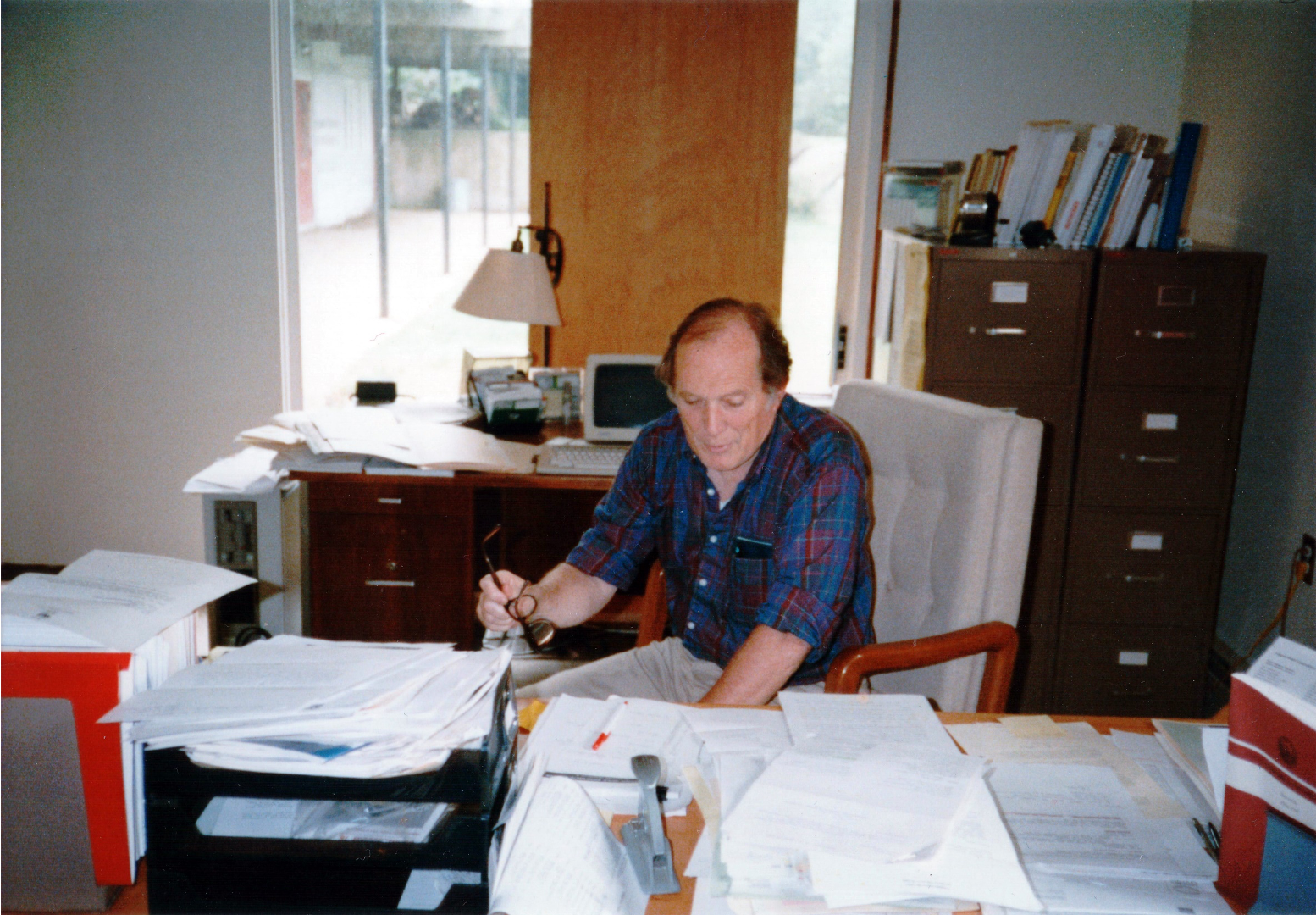 Dr. Woodwell has published more than 300 papers and has contributed articles to Science, Scientific American, BioScience, Nature, Ecology, and the Journal of Ecology, among many. He has edited books on the effects of nuclear war, the global carbon cycle, biotic impoverishment, and satellite imagery used in measuring the area of forests globally. His books include Forests in a Full World; Carbon and the Biosphere; The Earth in Transition: Patterns and Processes of Biotic Impoverishment; and Biotic Feedbacks in the Global Climatic System: Will the Warming Feed the Warming? His most recent book, published in 2016, is A World to Live In: An Ecologist’s Vision for a Plundered Planet.

Dr. Woodwell established the Woods Hole Research Center (now Woodwell Climate Research Center) in 1985. Prior to that, he was founder and director of the Ecosystems Center of the Marine Biological Laboratory in Woods Hole and a senior scientist at Brookhaven National Laboratories. He co-founded the Environmental Defense Fund and is currently an honorary member of its board of trustees. He was a founding trustee and continues to serve on the board of the Natural Resources Defense Council. Additionally, Dr. Woodwell is a former chairman of the board of trustees and currently a member of the National Council of the World Wildlife Fund, a founding trustee of the World Resources Institute, and former president of the Ecological Society of America.

Dr. Woodwell is a member of the National Academy of Sciences and a Fellow of the American Academy of Arts and Sciences. He received the 1996 Heinz Environmental Prize, the John H. Chafee Excellence in Environmental Affairs Award of 2000, and the Volvo Environment Prize of 2001. He holds a bachelor’s degree from Dartmouth College, received his master’s degree and doctorate in botany from Duke University, and served as a commissioned officer in the U.S. Navy from 1950 to 1953. 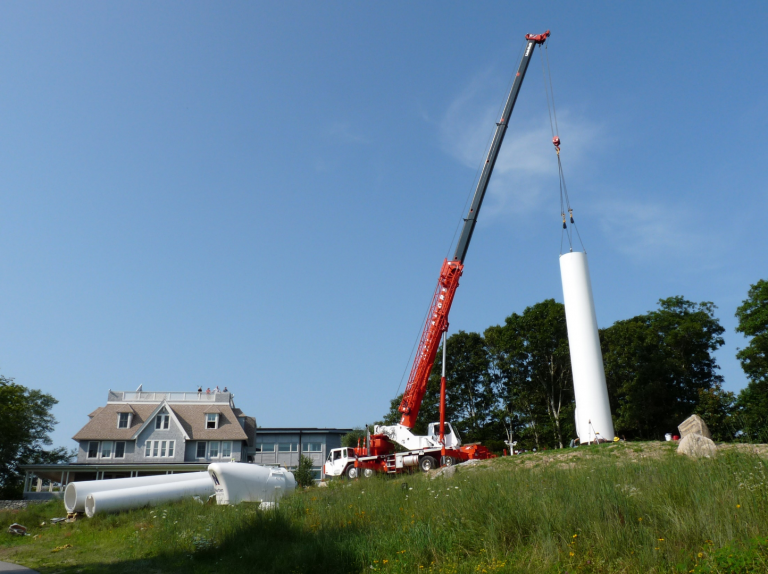 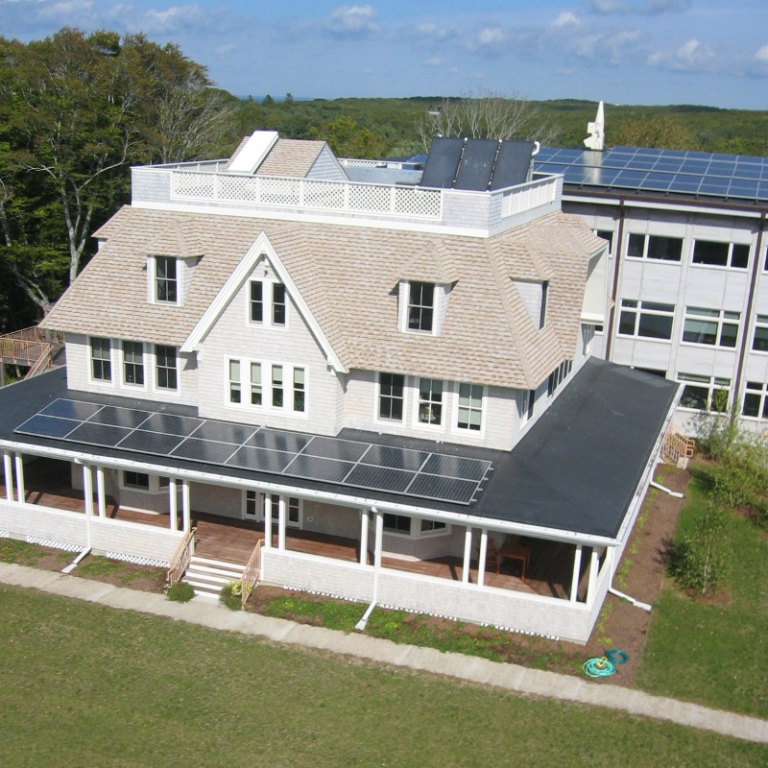 Above: The Gilman Ordway campus and wind turbine under construction.

For its first 18 years, Woodwell Climate Research Center’s headquarters were in the village of Woods Hole. In 1999, Dr. Woodwell led the campaign to purchase and renovate a building that would not burn fossil fuels but instead be a model of green architecture and sustainable energy systems. The new Gilman Ordway Campus was dedicated in 2003, and Dr. Woodwell later wrote a book about its concept and construction, The Nature of a House: Building a World That Works (Island Press, 2009), with a foreword by the architect, William A. McDonough.

Dr. Woodwell’s work continues to this day, successfully pushing Dartmouth College (his alma mater) to reconsider a new woody biomass energy plant because of its greenhouse gas emissions, and speaking at a rally in support of the Climate Strike in his home of Falmouth, MA, where he lives with his wife of 64 years, Katharine.