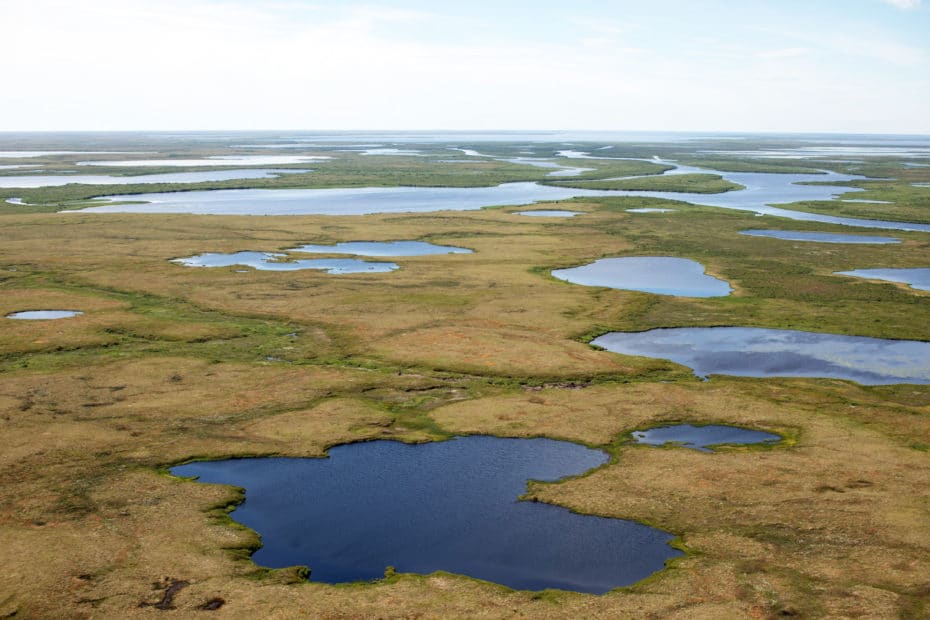 More carbon is locked away in northern permafrost soils than is currently in the atmosphere. In recent decades, scientists have sought to determine the impact of Arctic warming and permafrost thaw on atmospheric CO2 levels. Strides have been made in the understanding how organic carbon stored in permafrost is converted into CO2 by microbes and released to the atmosphere, acting as a positive feedback to climate warming. However, less is known about the transformation and fate of permafrost carbon in formerly glaciated terrains. Such terrains contain relatively ice- and mineral-rich permafrost and cover vast swaths of the north. Working on the formerly glaciated Peel Plateau in Canada’s Northwest Territories, Dr. Scott Zolkos and colleagues aimed to close this knowledge gap and begin to create a more complete picture of Arctic carbon cycling.

“Minerals within deeper permafrost on the Peel Plateau were finely ground by glacial activity, remained unmodified for millennia within frozen ground, and are therefore chemically reactive upon thaw,” explains Zolkos. “Thaw and chemical weathering of these sediments, which contain inorganic carbon-bearing minerals, may result in fundamentally different CO2 cycling compared with regions containing relatively organic-rich permafrost, like Siberia.”

It is not only the ice- and mineral-rich composition of permafrost on the Peel Plateau that makes it a hotspot for cycling of inorganic carbon—which includes CO2 and bicarbonate (CO2 in a form that is less readily exchanged with the atmosphere)—but the magnitude and rate at which permafrost is thawing. “Widespread thaw and ground collapse [thermokarst] is mobilizing thousands of cubic meters of sediments into stream networks on the Peel Plateau,” says Zolkos.

To understand how thermokarst and mineral weathering influence carbon cycling on the Peel Plateau, the team started sampling in the headwaters and progressed downstream to the Peel River.

“As expected, CO2 in headwater streams was mainly sourced from soils and mixing with the atmosphere,” notes Zolkos. “In contrast, much of the CO2 within thermokarst sourced from mineral weathering, and this weathering increased bicarbonate concentrations downstream by 100 times.”

Increased bicarbonate fluxes in streams on the Peel Plateau are indicative of environmental change occurring across the larger Mackenzie River basin, in which accelerating thermokarst is partly responsible for increasing bicarbonate fluxes to the Arctic Ocean. Within the marine environment, this bicarbonate may buffer against ocean acidity, convert into CO2, or be buried in sediment after transforming into carbonate.

The fieldwork, conducted in summer 2017, was conducted on the traditional lands of the Gwich’in peoples. Zolkos is deeply thankful to the Aurora Research Institute, the Gwich’in Renewable Resources Council, and the residents of Fort McPherson, whose assistance and knowledge greatly improved understanding of, and inspired appreciation for, the striking ecological changes occurring on the Peel Plateau. Across the northern permafrost zone, rapid warming and permafrost thaw are driving a suite of landscape and ecosystem changes. The Peel Plateau work has inspired Zolkos to pursue career research to better understand how these changes are unfolding across the Arctic, and what the implications are for people, ecosystems, and global climate.