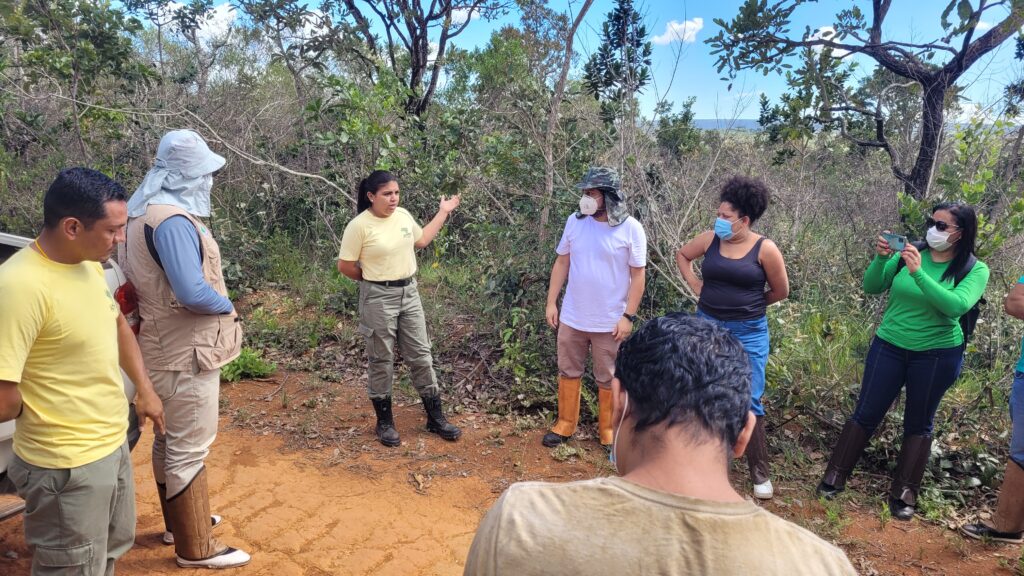 Participants attended from Indigenous lands located in a variety of Brazilian landscapes—from the Cerrado to the heart of the Amazon. Despite differences, participants found learning from other Indigenous communities extremely valuable.

Despite centuries of successful Indigenous management, the Xingu’s fire regimes are changing

The first designated Indigenous land in Brazil, Território Indígena do Xingu (TIX), has been cited by studies for decades as a successful buffer against the deforestation, degradation, and fires that plague other parts of the Amazon. A recent study, co-authored by Dr. Divino Silvério, Professor at the Universidade Federal Rural da Amazônia, and Dr. Marcia Macedo, Woodwell Water Program Director, shows that fire regimes are changing in the Xingu region, leading to more forest loss and degradation.

The paper shows roughly 7 percent of the TIX has been degraded by drought and fire. Degradation is part of a feedback loop wherein damaged forests become drier and more susceptible to burning in future fires.

Indigenous communities in the TIX have been managing the rainforest for centuries with finely adapted slash and burn cycles that create space for agriculture and promote the growth of natural species used in construction, medicine, and cooking. These cycles can last three to four decades before an area is burned again. Traditionally, burns were well controlled and the rainforests surrounding burned areas were healthy enough to prevent flames from escaping.

But over the past two decades, the paper observed, escaped fires have occurred more often within the reserve and the likelihood that forest is lost post-fire is rising, particularly in seasonally flooded forests. Indigenous management practices have not changed significantly, the paper explains, so why the increased prevalence of fire and degradation?

Climate change is drying out forests, making them more susceptible to escaped burning from management practices. The other factor driving degradation within the territory is growing population. Indigenous communities are becoming less nomadic, and village populations are rising, increasing the area of forest used for subsistence. Degradation was higher in areas surrounding villages.

“The way Indigenous people manage fire has stayed the same, but we now have a different climate,” said Dr. Divino Silvério. “Indigenous people have been in these regions for many decades or centuries. And all this time they have had their own fire management to produce food that usually doesn’t end in these huge forest fires.”

What this means for Indigenous fire management

Climate change will force Indigenous communities within the reserve to adapt traditional practices to protect the forest against more frequent, intensifying fires—despite these communities not contributing to global emissions.

Previous attempts to manage increasing fires through prescribed burning have clashed with the needs of residents of the TIX. Burning at a different time of year does not cultivate the same species, and residents were concerned it was jeopardizing the growth of plants used for medicine.

Dr. Silvério is working with residents of the Xingu to understand how to integrate changes to fire management practices with traditional strategies in a way that supports community needs. One example, he said, could be shifting the primary construction material from grasses (that grow after fire) to palms.

“Indigenous people will probably need to learn how to live in this new reality, an environment with more drought and more fires. We are trying to work in a participative way to construct solutions with them.”