The challenges of permafrost photography 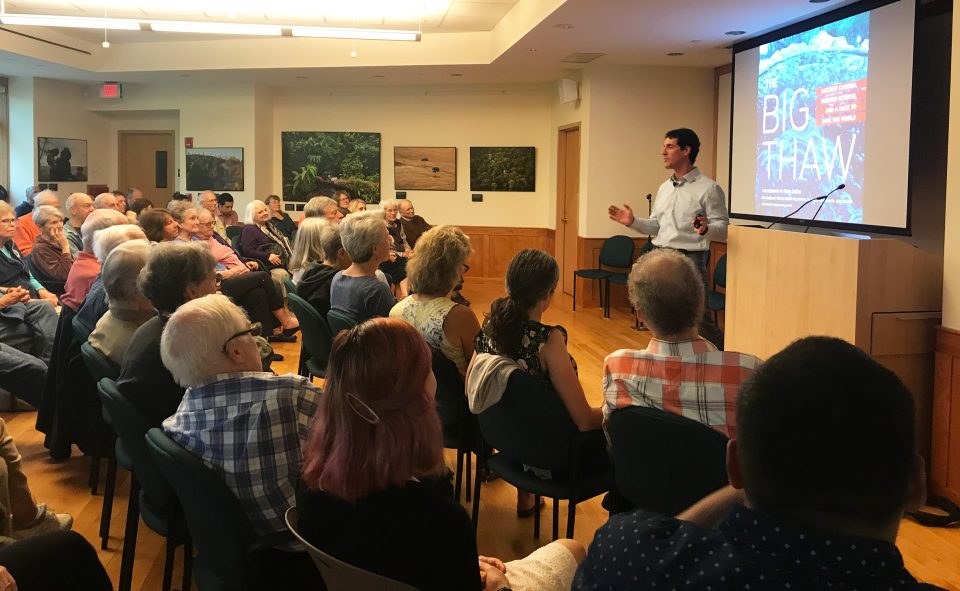 Chris Linder gives a presentation on photography, with a focus on permafrost.

Photographer Chris Linder, whose pictures will be featured in the upcoming WHRC book The Big Thaw: Modern Science, Ancient Carbon, and a Race to Save the World, recently spoke at Woodwell Climate Research Center (formerly Woods Hole Research Center) about his travels around the world’s tundra taking photos that show the impact of climate change and the beauty of the places at risk.

Linder is a professional science and natural history photographer. A former naval officer and oceanographer, Linder now focuses on communicating the stories of scientists working in extreme environments. He’s documented more than fifty scientific expeditions in all, from the Congo to Siberia, and has spent over two years of his life exploring the polar regions. Linder’s images have appeared in museums, books, calendars, and magazines.

Dr. Robert Max Holmes, Woodwell Deputy Director and a co-author of The Big Thaw, introduced Linder and spoke about how Linder’s compelling pictures can help educate the public about climate science. “I found that when I was giving talks, if I put up slides of Chris’ photography behind me, people were suddenly more interested in what I had to say,” Holmes said.

Linder detailed how the remote and extreme polar environments pose enormous challenges to getting the shot just right. “In 2009, I was prodding the bottom of a Siberian lake to get pictures of greenhouses gases bubbling up from thawing permafrost, but it was hard to show in the murky water. I tried getting in the water, but I quickly lost feeling in every part of my body. The next year, I came back with a wetsuit and spent hours taking thousands of pictures of little but muddy water – until I took this one,” said Kinder, revealing a dramatic picture of bubbles bursting through the surface.

After Linder’s presentation, a panel of Woodwell scientists and Polaris Project students talked about the life-changing impact of their firsthand experiences on the tundra.