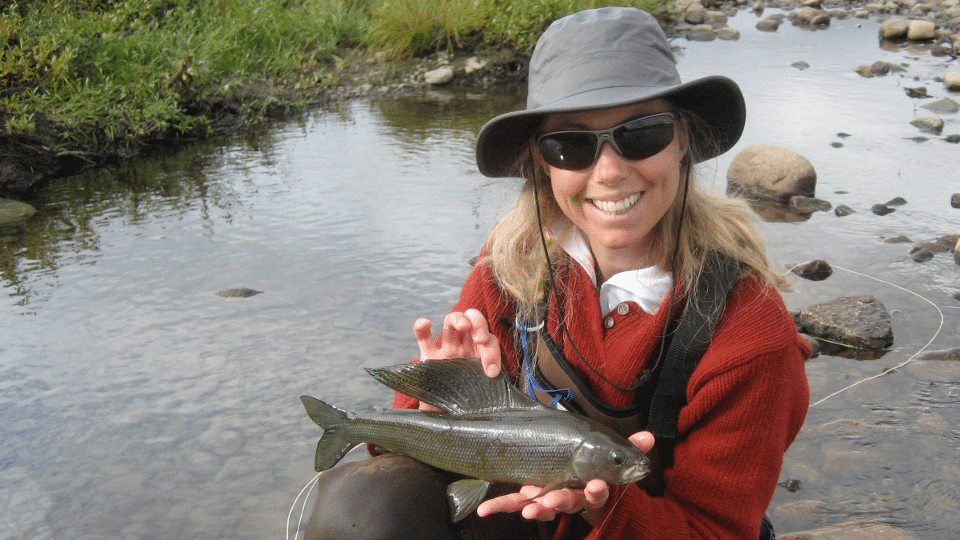 Above: Dr. Heidi Golden, University of Connecticut, holds an Arctic grayling during 2019 field work with Woodwell scientists in Alaska.

The Arctic grayling is a freshwater fish known mostly for its good looks, but scientists know it as a keystone species—a single species capable of shaping an entire ecosystem. Their unique life history can make them the only fish species in many Arctic rivers and they provide important food to other predators and human populations. Woodwell Climate Research Center scientists are working to understand how Arctic grayling are responding to climate change, and what that means for Arctic food webs.

The transportation of energy, nutrients, and organisms across ecosystem boundaries is critical to sustaining and increasing the productivity of these complex systems. Due to the scarcity of flowing streams and resources in the winter, the movement of nutrients from one habitat to another is particularly significant in the Arctic. Harsh environmental conditions led species to develop finely tuned life histories, dependent on predictable climate patterns. However, because ecological communities are open and interconnected, changes to one habitat ripple and the threats posed by climate change compound.

The seasonal movements of Arctic grayling demonstrate this interdependence. In the summer months, Arctic grayling live in rivers—growing, reproducing, and raising young in this comparatively productive environment. In August, as the shallow streams begin to freeze solid, Arctic grayling migrate to lakes that do not freeze, overwintering among lake trout populations that depend on the annual influx of energy the grayling represent.

Seasonally, Arctic grayling provides an abundant and high quality food resource for lake trout populations that key into these migratory patterns. Lake trout are sustained by their ability to feed on grayling through the eight-month winter and are impacted by changes to grayling habitat and migration patterns.

“There is a strong imperative on both ends of the Arctic grayling migratory pattern,” said Woodwell Climate scientist Dr. Linda Deegan. “In the fall, grayling must leave shallow rivers to avoid the winter freeze. In the spring, they must leave deep lakes just as ice break up occurs to avoid a voracious predator, the lake trout.”

This life cycle is highly dependent on the flow of water between streams and lakes, and that is dependent upon climatic conditions that are changing rapidly. Not only are temperatures rising but important weather patterns, including timing and amount of precipitation, are shifting. Lakes are thawing and high spring discharge is occurring earlier in the season, disrupting regular Arctic grayling migratory patterns and prompting an earlier release from lake habitats. With less rain in late summer, fish get trapped in dry stretches of streams, fail to make it back to the lakes for the winter, and die. Immediately, this deprives lake trout of that winter’s food. In the long term, these changes can lead to a decline in grayling populations and starvation of lake trout.

Arctic grayling are a highly prized recreational fly fishing species on the North Slope and used by Indigenous populations. Changes to their life cycle could have far reaching socioeconomic impacts for local communities that depend on the Arctic grayling for subsistence and on the income of visitors that fish for sport.

As climate change threatens aquatic connectivity, understanding ecological links between stream and lake habitats is more pressing than ever.

“We hear a lot about changes in terrestrial ecosystems in the Arctic due to climate change,” said Deegan. “But freshwater ecosystems are also going through huge climate-driven changes right now too.”