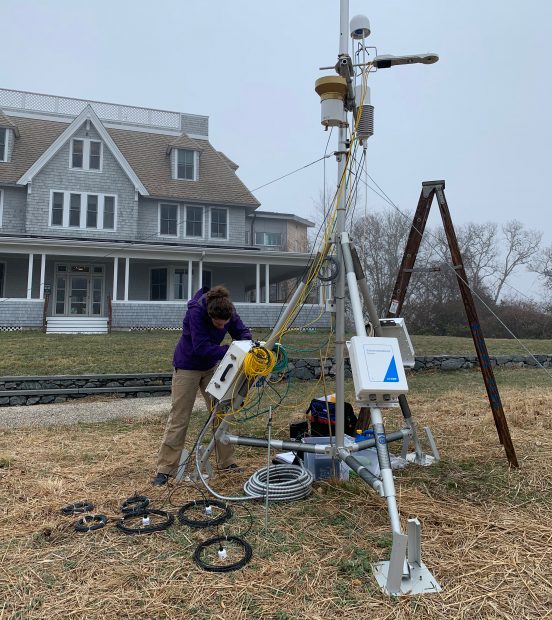 Testing of the flux tower at the Woodwell campus before deployment in Alaska.

At a time when the signal of climate disruption is being heard louder than ever in Alaska, Woodwell Climate Research Center (formerly Woods Hole Research Center) scientists have an important new tool in the tundra to understand how fast Alaskan permafrost is thawing and how that will impact climate change globally. Woodwell Climate is installing a new flux tower during this year’s Polaris Project expedition to Alaska to measure carbon uptake by plants and emissions from plants and soils, including from thawing permafrost.

Woodwell scientists have been traveling to the Yukon Delta National Wildlife Refuge for the last five years. “It’s a place where permafrost is on the brink of thawing, and will be thawed by the end of the century, if not much sooner,” said Dr. Sue Natali, Woodwell Associate Scientist. “This work is critical to understand how global carbon pollution, permafrost thaw, and wildfires interact in the carbon cycle – and how we can work to slow those processes.”

While Alaska is known for its rugged mountains, the Refuge sits on its western coastal plain where the Yukon and Kuskokwim Rivers empty into the Bering Sea. It covers nearly 30,000 square miles, an area larger than West Virginia, and is home to 35 villages and 25,000 people, many of Yup’ik origin and dependent on a subsistence lifestyle now threatened by our warming climate. It’s home to a wide range of wildlife, including bears, wolves, muskoxen and moose, as well as seals, whales, walruses and porpoises offshore. More than one million ducks and half a million geese use the area for breeding purposes each year, and 150,000 Mulchatna caribou spend the fall and winter on the eastern tundra.

Permafrost is the carbon-rich frozen soil that covers 24 percent of northern hemisphere land area. Right now, it keeps climate-warming gases safely locked away, but as global temperatures warm, permafrost thaws and releases greenhouse gases to the atmosphere. Across Alaska and Canada, area burned by wildfire has approximately doubled since 1960. Wildfires that swept through the Delta in 2015 caught the attention of Woodwell scientists, drawing attention to the need for closer emissions monitoring.

“Across the globe, from Alaska to Siberia, permafrost holds much more carbon than has ever been released by humans. What’s especially alarming is that permafrost carbon is largely ignored in current climate change models,” said Dr. Max Holmes, Woodwell Deputy Director and Senior Scientist, who’s been working in the Yukon River Delta region through Woodwell Climate’s Arctic Great Rivers Observatory since 2003.

Woodwell scientists tested the new flux tower at Woodwell Climate’s Falmouth campus before bringing it north to the tundra. “We expect that carbon emissions from permafrost thaw will be on par with the carbon pollution from the entire United States, but there is a lot of uncertainty in future projects. These on-the-ground measurements are critical for understanding exactly how much carbon will be released, how fast it will be released, and in what form—carbon dioxide or methane—so we can account for it in our carbon budgets now,” Dr. Natali said.

“It’s audacious what we’re doing, taking a group of people with a wide range of wilderness experience, and getting them set up with a camp, cook, and doctor so they can do field research that really matters,” Dr. Holmes said. “There’s also great beauty in being disconnected from everything else – no cell service, no wifi. There are no distractions, and many of these students have never experienced that.”

The 2019 expedition is the 11th class of the Polaris Project. Students develop individual research questions related to permafrost thaw, wildfires, greenhouse gas emissions, and other climate impacts in the Arctic. After fieldwork in Alaska is complete, students then spend two more weeks at Woodwell Climate headquarters to analyze samples and process data, and prepare their findings to present to the scientific community.

“We don’t just bring climate scientists and students to the tundra—we bring people who can translate this work to new audiences back home. We’ve brought photojournalists like Chris Linder, mapmakers like [Woodwell] senior geospatial analyst Greg Fiske, and K-12 teachers to bring the lessons home to their schools,” Dr. Holmes said.

The flux tower will be a long-term resident of the Yukon Kuskokwim Delta, sending emissions data to Woodwell Climate via satellite link. In October, Dr. Natali and her team will return to Alaska to prepare it for winter. Soft ground and thawing permafrost can knock some instruments off-kilter, and others could be inadvertently targeted.

“Red foxes are beautiful animals, but they’re curious about everything and want to know if it’s food. They’ve chewed through my wires, pulled equipment out of the ground, even cost me a year of data more than once. I have a love-hate relationship with foxes,” Dr. Natali laughed.

After a record-warm spring that saw historically low Arctic sea ice, every bit of data on how the tundra is being transformed is invaluable.

“[Woodwell Climate] strives to make sure this permafrost work touches every aspect of our organization, including data synthesis, web visualization, communications, and policy outreach. We want this science from the Yukon Kuskokwim Delta to inform the entire science and conservation community,” Dr. Holmes said.