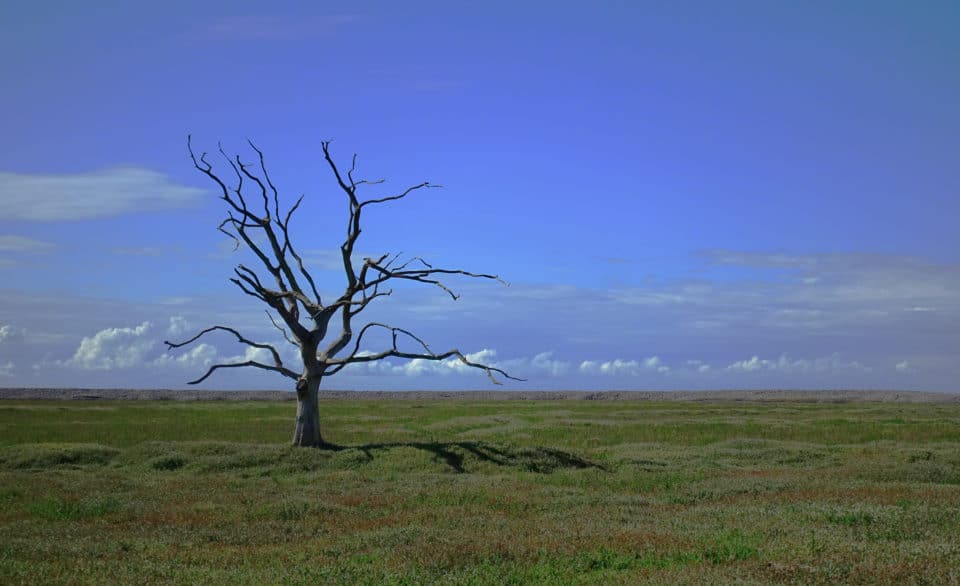 The year just ended was notable for the striking divergence between increasing physical manifestations of climate change—together with heightened public awareness of the problem—and a contradictory decrease in policy action. Impacts of climate change, such as wildfires, hurricanes, and extreme heat, seemed to hit us over the head, even as our federal government industriously dismantled policies to cope with a problem it won’t admit is real.

Lately I’ve been reading climate science papers from the 1970s and 1980s, including some by Woodwell Climate Research Center (formerly Woods Hole Research Center) founder George Woodwell. It is astonishing how accurately these papers predicted the manifestations of climate change, years and even decades before they were observed. The first observational “detection and attribution” of human-caused climate change did not come until 1995.

In the subsequent 23 years, human-caused climate change has grown from something detectable only in careful statistical analyses to a costly and deadly monster.

2018 began with the announcement by the National Oceanic and Atmospheric Administration that 2017 had been the 3rd warmest on record, behind 2016 and 2015. (In February of this year, both NOAA and NASA reported that 2018 was the 4th warmest year on record.) February then brought a heatwave to the Arctic and unprecedented wildfire to northern Sweden. Such events have increased in frequency and duration as a result of climate change. In March, four Nor’easters struck New England. As shown by Woodwell Climate’s Dr. Jennifer Francis and others, this type of persistent extreme mid-latitude weather is an expected consequence of rapid Arctic warming. In July, what may be the highest temperature ever reliably measured anywhere (124.3 F) was recorded in Algeria. In late summer, Hurricane Harvey dumped over 50” of rain on Houston, and Hurricane Florence struck the Carolinas – both storms exhibiting expected consequences of climate change such as high precipitation rates, slow propagation speeds, and rapid intensification. Then Hurricane Michael became the most powerful storm to strike Florida in modern history. In November, the largest wildfire in California’s history destroyed the town of Paradise.

While these impacts unfolded, our capacity for denial, procrastination, and excessive celebration of half-measures seems to have grown in proportion. At a hearing of the House Committee on Science, Space and Technology, Alabama Congressman Mo Brooks suggested to me that sea level rise is caused by erosion, rather than by climate change. In August, then-Interior Secretary Ryan Zinke blamed “environmental terrorist groups” for western US wildfires.

And yet there is still cause for optimism. The Paris climate agreement remains a good framework for addressing climate change. With sufficient ambition, it could be very effective. Woodwell Climate is working to that end—helping developing countries to meet their Paris commitments—through an agreement signed last February with the Climate Policy Lab at the Tufts University Fletcher School of Law and Diplomacy.

The costs of wind and solar energy have declined dramatically, making them competitive with fossil fuels and leading to more rapid than anticipated adoption. Early experiences with real-world climate policymaking indicate that well-designed policies can have positive economic impacts immediately. This suggests that the oft-cited tradeoff between environmental health and economic vitality, which has to be false in the long run, doesn’t apply in the short term, either. We always underestimate the potential for technological innovation, so to the extent that this can help to solve climate change, we should feel heartened.

Finally, the ongoing groundswell of action by cities, states, corporations, philanthropies, and individuals is not only encouraging but substantive. In 2018, Woodwell Climate launched climate change initiatives with a range of partners, from the Boston archdiocese of the Catholic Church to global investment firm Wellington Management. Broad-based “bottom-up” action on climate change will create a strong constituency that will lead sooner or later—I suspect sooner—to ambitious federal policies.

What can we expect in the coming year? The impacts of climate change—extreme heat, turbocharged hurricanes, and so on—will continue to become more severe, although with unpredictable year-to-year variability. Immediate prospects for successful climate legislation in the US Congress remain dim, but we can at least expect the amount and quality of discourse in the House of Representatives to improve (it wouldn’t take much). And here at Woodwell Climate, we will continue to work with public- and private-sector partners to inform climate-related policies and decisions, and to conduct world-class research illuminating the causes and effects of climate change, as well as possible solutions. And of course we will continue to raise our voices in support of sane, science-based climate policies.