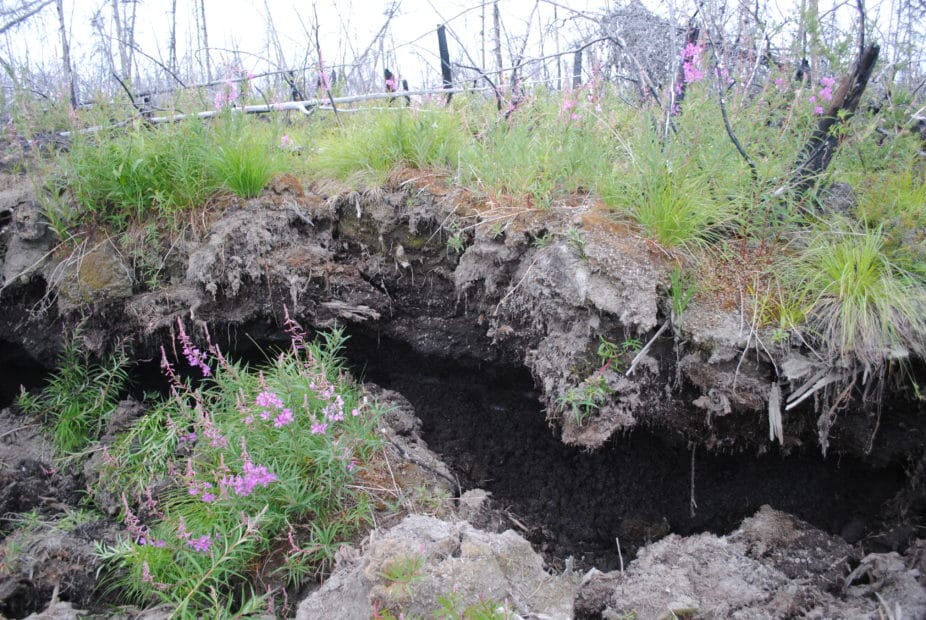 Above: Evidence of permafrost thaw

Climate science and policy discussions are so focused on what we need to do (but are not doing) in the next several decades, that very little attention is paid to “the end game,” maintaining a stable and safe climate into perpetuity.

That requires levels of atmospheric greenhouse gases which are steady or decreasing and are low enough that the climate is livable in most places where people are now. To get there we need to cease all direct human emissions of greenhouse gases (from fossil fuel burning, land use change, agriculture etc.) That’s difficult enough, goodness knows, but it’s only the beginning. Biogenic feedbacks, such as thawing permafrost, add greenhouse gases to the atmosphere. This means that even if direct human emissions of greenhouse gases are completely shut off, these feedbacks will continue to push us into a warmer climate. That of course would strengthen the feedback emissions, and it would only get worse from there.

In other words, greenhouse gas emissions from biogenic feedbacks threaten to undo all of the hard work it would take to stop human emissions of greenhouse gases, work which so many of us are so fervently engaged in. As discussed in a recent paper published by the National Academy of Sciences, these feedback emissions tend to push us into a “hot-house Earth” through uncontrolled climate warming. This is a situation we want to avoid, to put it mildly.

What does this have to do with the work of Woodwell Climate Research Center (formerly Woods Hole Research Center)? Everything, as it turns out. The paper lists five biogenic feedback mechanisms which tend to destabilize Earth’s climate, and four of these are topics of research at Woodwell Climate (permafrost thawing, relative weakening of physiological carbon sinks, Amazon forest dieback, boreal forest dieback).

This means that Woodwell Climate’s work is central to understanding not only direct human contributions and solutions to climate change, but also “natural” mechanisms, stimulated by humans, which threaten to overwhelm everything else humanity is doing. It doesn’t get much more important than that.

Understanding is great, you may be thinking, but what can we do about this? That depends upon what research reveals. It’s conceivable that we may be able to find ways to slow or even stop biogenic feedback emissions. Most likely, however, at least some of these biogenic feedback mechanisms will continue to emit, and in order to keep the climate stable we’ll need to figure out some way to remove enough greenhouse gases from the atmosphere to keep overall levels steady or decreasing. If we can remove greenhouse gases quickly enough, Earth will eventually cool and the feedback mechanisms will slow down, allowing us to slow and ultimately to stop removing greenhouse gases from the atmosphere.

If this all sounds pretty challenging, it is, but I don’t see any other way to safeguard the long-term future of humanity. Also, as with everything in climate policy, while the science is plenty difficult, the hardest part is probably achieving the degree of societal cooperation needed to implement whatever long-term solution is devised.

As the title says, thinking about “the end game” provides a new reason to value Woodwell Climate’s work. On some level, these biogenic climate feedbacks are another example of how, as George Woodwell first pointed out long ago, a healthy and functioning biosphere is necessary for a stable climate and ultimately for human prosperity. Thanks as always for your interest and support.