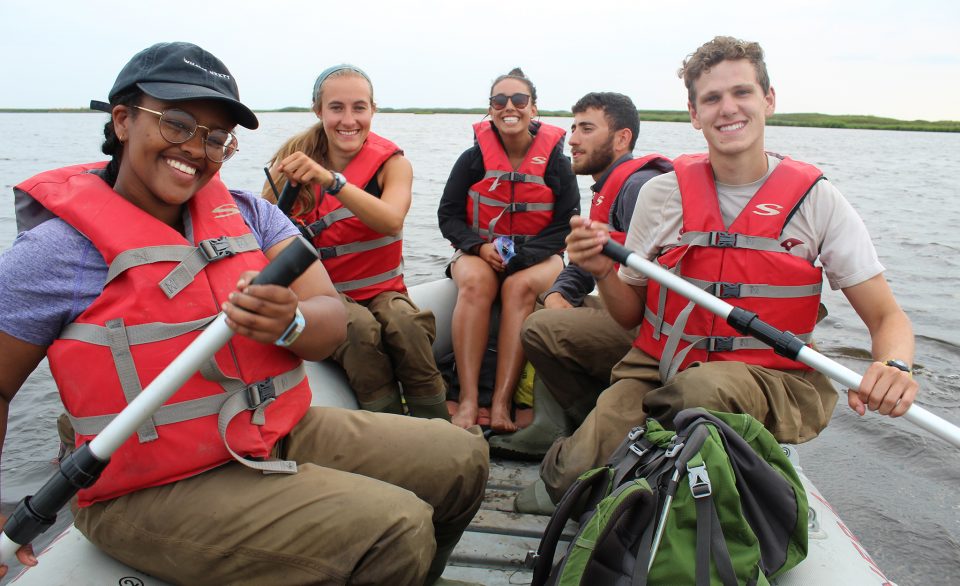 This July, a heat event in Greenland melted about 50 billion tonnes of ice—enough to measurably raise the global sea level. Accelerated melting of major land ice sheets is the main reason why projections of future sea level rise have been revised upwards several times recently—my guess is not for the last time.

This extreme melt event in Greenland comes on the heels of temperatures reaching 90ºF on the arctic tundra earlier this summer—a temperature that is extreme almost anywhere and practically without precedent in the Arctic. The consequences of that extreme heat include accelerated thawing of permafrost and associated release of greenhouse gases, and increased risk of wildfire (which itself emits greenhouse gases and thaws more permafrost). Indeed, the extreme temperatures on the tundra were accompanied by choking smoke from nearby fires. The experience of doing research in this apocalyptic environment was described very vividly by Dr. Sue Natali, one of Woodwell Climate’s intrepid arctic scientists. These alarming events should serve as a wake up call to policy makers who are complacent or in active denial.

It is not news that the Arctic is warming two or three times faster than the rest of the planet, but one gets the impression that things are truly unraveling there. This is having huge impacts on Arctic communities, who find the earth moving beneath them (literally) as ground which had been frozen for tens of thousand of years now thaws. Ground collapse, increased erosion of coasts which are no longer protected by sea ice, increased wildfire, and risks to health and water security are some of the impacts experienced by arctic residents, including many Americans.

The situation is so dire that some villages have no choice but to relocate. These villagers are finding, however, that their government is not equipped to help them with this unfolding disaster. None of the Alaskan villages which were seeking to relocate ten years ago has yet done so—only one is even underway—in part because of lack of scientific data to support hazard assessment and relocation planning. To address this, Woodwell Climate Research Center is working with affected communities and with local governmental and non-governmental organizations to document ongoing consequences of climate change and to anticipate and plan for what is coming. We are combining state of the art science with indigenous knowledge to identify local responses to the hazards of a rapidly changing Arctic.

It is not news, either, that consequences of arctic unraveling are truly global. Accelerated sea level rise affects coastal communities everywhere, and greenhouse gas emissions from arctic permafrost and wildfire threaten us all. Woodwell Climate Research Center is at the forefront of measuring and modeling these arctic greenhouse gas emissions. We are moving this important science forward, and we are also working with international policymakers to make sure these previously-ignored emissions are included in global climate policy processes. When this happens, we will all understand better how rapidly we need to curb greenhouse gas emissions in order to stay below 1.5 or 2oC or warming. The news won’t be encouraging—considering a previously-ignored source of emissions can only make the task more difficult—but it is critical that policies be based upon the best possible understanding of our situation.

There are bright points in this otherwise challenging picture. In July, I spent several inspiring hours with students participating in Woodwell Climate’s Polaris Program, in which undergraduate and graduate students conduct original research at Woodwell Climate’s observing station in the Alaskan arctic. Their collective work gives an impressive picture of unprecedented change and accelerating impacts. Even so, these young people—many if not most from groups under-represented in science—bring so much talent, energy and creativity to what they do that I can not help but feel some hope for the future. There is optimism, too, in knowing what’s happening, daunting though it may seem, because only by understanding the scope of the problem can we develop a plan to address it. That’s our mission at Woodwell Climate Research Center, and it has never been more important.