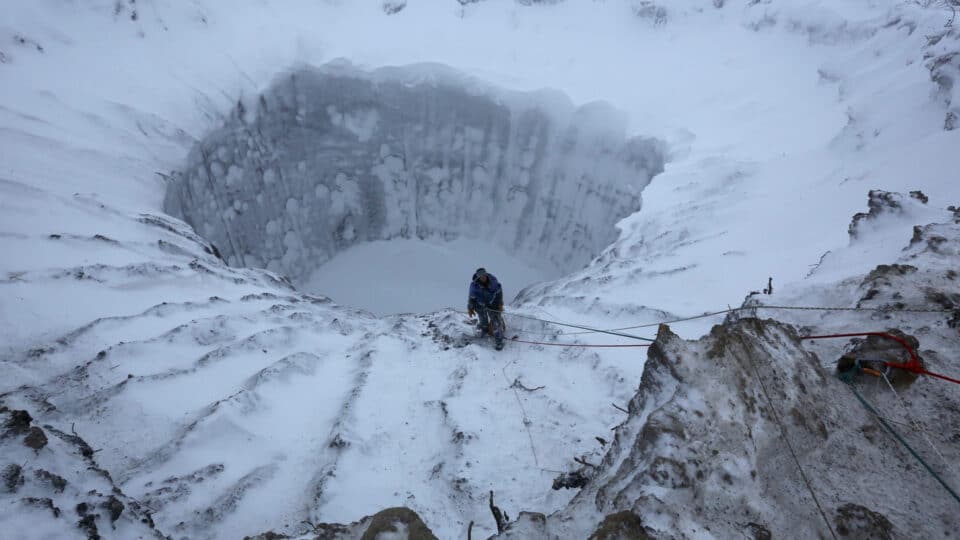 Tune in to PBS NOVA on February 2 to watch Arctic Sinkholes, an original documentary that explores the hidden dynamics of thawing permafrost and the emissions it releases. The documentary features Woodwell Arctic Program Director, Dr. Sue Natali, alongside other prominent climate scientists working to better understand how climate change is impacting the Arctic.

The film centers on the 2014 discovery of methane craters in the Arctic. These features of the landscape are formed as permafrost thaws, and trapped greenhouse gasses expand, pushing the soil up. When the pressure becomes too great, these bubbles of earth can explode suddenly, creating massive craters on the Arctic landscape and releasing a burst of atmosphere-warming gasses.

“There’s a lot of discussion about carbon dioxide and its relationship to climate, but the impact of methane coming out of the Arctic is potentially enormous,” says NOVA Co-Executive Producer Julia Cort. “Making accurate predictions about the future depends on good data, and Arctic Sinkholes reveals what scientists have to do to get that data, as they try to measure an invisible, odorless gas that’s underground in some of the most remote and challenging environments in the world.”

To better understand the extent and significance of these craters, Dr. Natali and Woodwell Senior Geospatial Analyst, Greg Fiske, devised a method of mining satellite imagery data for key characteristics that would indicate a recent explosion. A sudden shift from vegetation to water, for example—often, craters quickly fill up with rain, becoming lakes that obscure their own origins.

Outgassing from the craters themselves represents only a small subset of the larger potential emissions from permafrost thaw. Current estimates show that thawing permafrost could contribute as much to warming this century as continued annual emissions from the United States.

Methane craters make evident the speed at which the Arctic is warming, and the changes permafrost thaw is causing on the landscape. In their research, Dr. Natali and Fiske uncovered other impacts of permafrost thaw—slumping ground, sinkholes, and coastal erosion are destabilizing the ground on which many Arctic communities are built.

“These abrupt changes that are occurring in this once-frozen ground are happening faster than we expected,” said Dr. Natali. “And that is not only going to accelerate warming, but also affect the lives of millions who make their home in the Arctic.”

Future research will work towards more precise estimates of permafrost thaw emissions and a better understanding of the changing Arctic.

Arctic Sinkholes premieres Wednesday, February 2, 2022 at 9pm ET/8C on PBS and will be available for streaming online at pbs.org/nova and on the PBS video app.