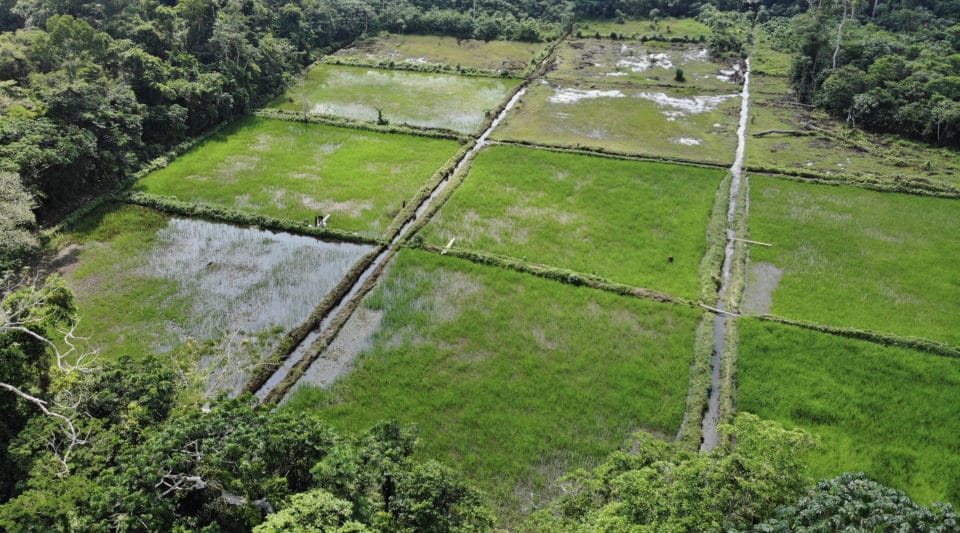 Above: Aerial view of experimental rice fields in DRC.

Local agricultural practices are the biggest driver of deforestation in the Democratic Republic of the Congo, as the majority of the population depends on slash-and-burn farming techniques to support their families and participate in the rural economy. In the heart of the central wetland Congo basin forests, communities in the DRC are located on the small proportion of dry upland islands in the forest landscape—the second largest tropical forest in the world—and rely on seasonal flooding of cleared fields to grow wetland rice. Expansion of wetland rice production is a promising agricultural opportunity, but doing so while minimizing greenhouse gas emissions is a challenging proposition.

Over the past 15 years, the DRC Ministry of Agriculture and international partners have implemented an agricultural development program in the province of Mongala, which expanded wetland rice production using high-yielding varieties requiring high levels of inputs (fertilizer, insecticide and pesticide) to maintain outputs. However, local availability of these inputs were erratic and inhibited the long term success of this means of production. Furthermore, much of the rice produced did not remain in the food system for direct human consumption as intended, but rather, was purchased by brewery companies for beer production. While the program was celebrated as a policy success in some sense, it failed to increase food security and led to an increase in local deforestation that could spell disaster for tropical forests in the region if scaled up.

In the neighboring province of Equateur, Woodwell Climate is collaborating with local farmers to implement rice production technologies that would increase food security while limiting greenhouse gas emissions and local deforestation. The Center has experimented with the system of rice intensification (SRI) first employed in Madagascar, a low input system, which is not dependent on an unpredictable supply of inputs through local markets. The primary difference in the two approaches lies in field management practices and input use. High-yielding approaches seek to optimize output per individual rice plant by increasing planting density and utilizing mineral fertilizer to promote growth and herbicides to control weeds; without timely and appropriate application of inputs, production declines dramatically. In comparison, SRI uses a lower planting density and relies on hand weeding and increased human labor to maximize the outputs.

Woodwell Climate is running a pilot program in Equateur to test SRI efficacy in an experimental setting. Joseph Zambo, Forest and Climate Change Coordinator at Woodwell, has been overseeing this project over the course of the past year throughout the COVID-19 pandemic. Because Woodwell scientists were unable to travel due to pandemic restrictions, Zambo coordinated the implementation of the field trials and executed all of the data collection. With virtual instruction by Research Associate Kathleen Savage, Zambo set up and monitored methane collection chambers, which are crucial to understanding the greenhouse gas ramifications of SRI production.

Zambo worked with a local entrepreneur, Mr. Jean Bangi, to set up six fields of rice—three utilizing traditional production methods and three utilizing SRI methods. To measure GHG fluxes from rice fields, Zambo used static chambers that were sealed from the environment and open to the ground, which allowed Zambo to extract gases with a syringe and send samples back to the Falmouth campus for analysis. This process was repeated weekly to help Woodwell Climate scientists measure changes in GHG fluxes across the growing season between these two methods. At the end of the season, Zambo and his team harvested crops from all six fields. 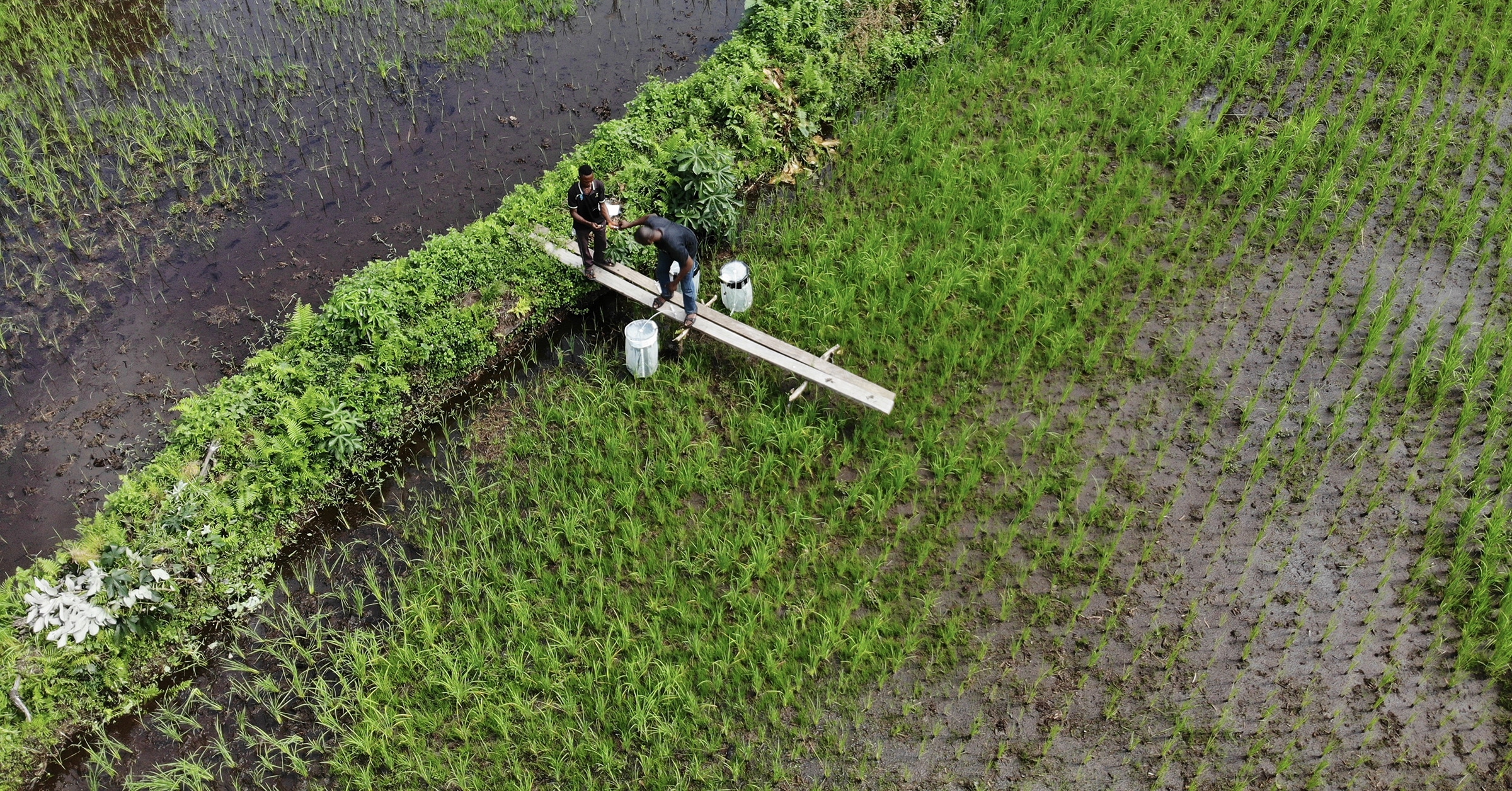 Above: Monitoring methane collection chambers in the DRC.

Currently, Savage is comparing GHG emissions to rice harvest yield rates to determine if SRI yields higher rice for lower GHG emissions. In the next phase of this project, Woodwell Climate researchers Dr. Glenn Bush and Kathleen Savage plan to study the economic and social ramifications of this work.

“It takes a lot of labor to expand wetland rice production,” said Zambo. “But I believe it is manageable. If we utilize SRI productively, we can spare a lot of the Congo from deforestation and improve farmer livelihood.”

If, as the early results suggest, SRI reduces GHG emissions from land cover change, while increasing yield, Dr. Bush believes the next step is to find ways to make the technique viable for all farmers. Although SRI was first implemented in Madagascar, the technology was not widely adopted for socio-cultural reasons. Traditionally, farmers left their land while waiting for crops to mature and followed the regional rain cycle to get paid jobs on other farms. However, that period of travel coincided with the time that additional weeding was needed most, so most farmers did not experience significant yield improvements and felt that SRI was a waste of time. Dr. Bush suggests that if SRI in the context of Congo’s wetland forests were to be promoted, it might be possible to employ novel financial incentives to help farmers adopt this technology, supporting them through otherwise difficult bottlenecks, to experience the benefits of SRI in full. In the next six months, Dr. Bush is planning to work with local government officials and farmers to assess attitudes towards SRI and conduct larger field trials.

Dr. Bush will deliver the findings from the first phase of work in the middle of this year, to feed into a provincial and national emissions planning and policy process. This project will improve accuracy of GHG accounting and create a more robust system based on local conditions. Further work on the agricultural economics of SRI will also reveal effective pathways to its adoption allowing farmers and policy makers to make better agricultural management decisions.

“Our ongoing commitment to our field site in Equateur allows us to be involved in these high level policy decisions. This model allows us to build trust with the people we work with and is what really sets us apart as an institution,” explained Dr. Bush.