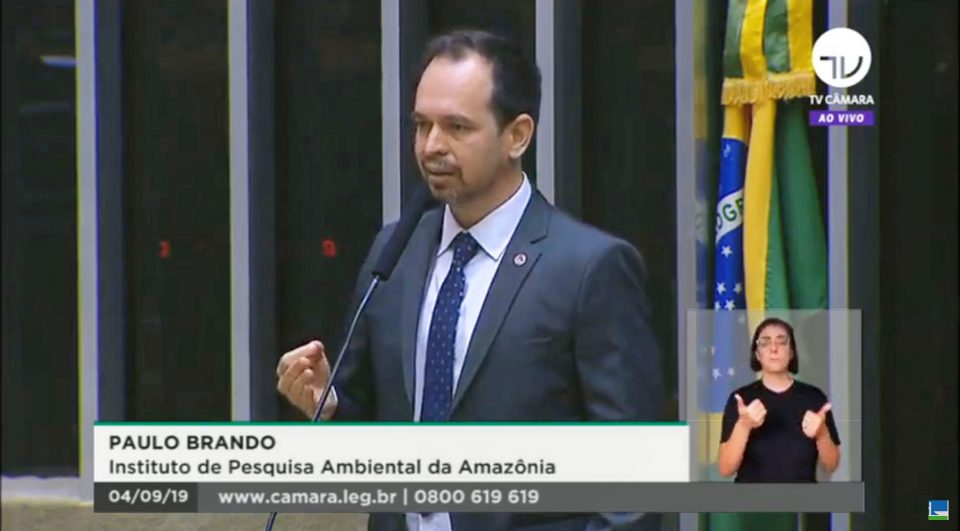 Dr. Paulo Brando, Woodwell Climate Research Center (formerly Woods Hole Research Center) adjunct scientist, testified before the National Congress of Brazil about Amazon deforestation and fires on September 4. Here is a transcript of his testimony, which can be viewed at YouTube.com/WoodwellClimate.

Good morning everyone. First I’d like to thank you for this opportunity to speak a bit about the research done by our group. There are over twenty years of research, and I’d like to underscore the fact that these research projects were published in principal journals around the world.

The principal point I’d like to make here today is that the cumulative deforestation of the Amazon region over the past twenty or thirty years is already sufficiently extensive to influence the climate of the region. In other  words, there are 760,000 square kilometers of deforested land – more than 7,000,000 football fields—twice the size of the state of Goiás plus 100,000 hectares—and this deforestation has already altered the climate of the southeast region of Amazonia. There has been an increase of 3 weeks in the length of the dry season. This increase is frightening. This means a shortening of the rainy season; those who plant crops know the problem of having a shorter window for planting. And this deforestation [*climate change] occurs because, when you knock down an Amazonian tree, you lose the capacity of this system to take water that is in the soil and pump it into the atmosphere.

In our research we have encountered tree roots that reach depths of 10, 15, even 20 meters. And this is why we have trees in the Amazon that can pump into the atmosphere somewhere between 300 and 500 liters of water per day. I’ll repeat – one large tree in the Amazon, 300 to 500 liters of water per day. Imagine the 500 to 600 trees that live in a hectare of forest. And for this reason, when we reduce the capacity of this system to pump water into the atmosphere, we have an increase in the surface air temperature. In other words, we already have an increase in the length of the dry season, together with an increase in temperature.

This brings me to my second point. Because of this increase—because of this change in climate—we have more flammable forests in the Amazon. The healthy, undegraded forests of the Amazon rarely catch fire. But as we deforest, we have forest edges that are much more vulnerable to forest fires,  not clearing burns associated with deforestation but fires in standing, living forest. And we have an increase in this over time. When we have a drought we have those catastrophic fires that we have already seen. Between the years 2000 and 2010, 85,000 square kilometers of forest burned. 85,000 square kilometers of living forest burned between 2000 and 2010! It’s a huge number. These forests are not resistant to fire, because their bark is very thin, so the environmental disaster is very big when you have these forest fires happening. A key thing we are seeing is that without a drought, forests rarely burn. So when we look at 2019, we see that the fires of 2019 have a special characteristic that we can compare with the fires of other years. In spite of the increase in forest flammability that we’ve seen over time, we haven’t had that many forest fires this year. What we have had is an increase in deforestation, and an increase in number of fires set to burn forests that were already cut down. And if we had had a drought in 2019, we would have a catastrophic situation. Catastrophic. So since we have had an increase in forest flammability, we would have to reduce the sources of ignition—in this case, it’s the matches used to set burns to clear cut forests. But instead we have increased this condition.

So in the coming years, what do we have to do to reduce the chance of forests catching fire? We need to reduce deforestation, because it reduces the sources of ignition—those matches that light fires to burn [already] cut forests. We reduce deforestation, we stabilize the local and regional climate. It becomes more difficult to burn, even more with the global changes. Reducing deforestation, we reduce the quantity of forest edges vulnerable to fire—those more degraded forests. Besides everything else this will help agriculture, as I’m sure many of our other invited guests today will talk about.

Thank you very much.