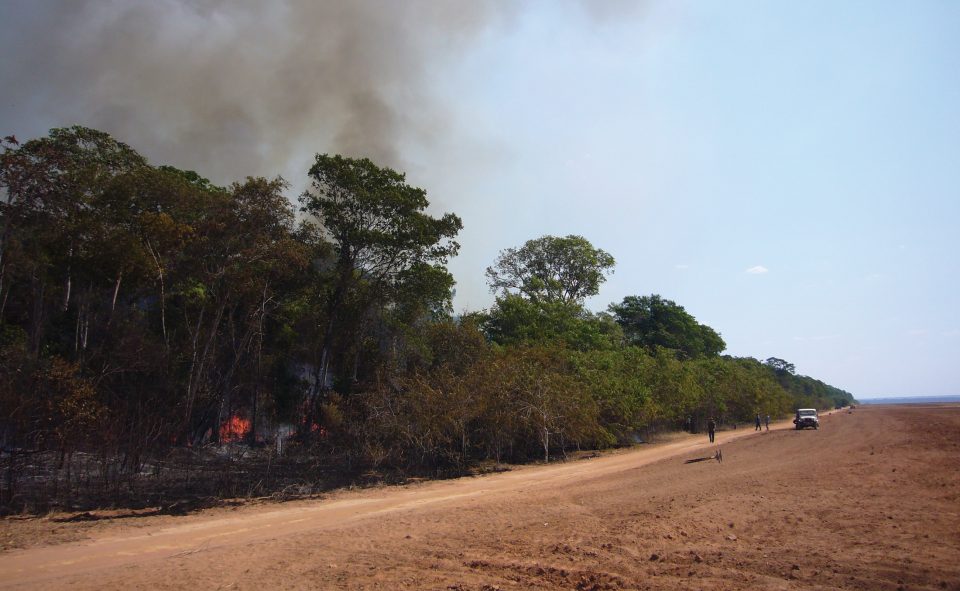 Fire in the forest at Tanguro Ranch in Matto Grasso, Brazil.

A chance encounter with a windstorm led to a study released earlier this year showing that fire-damaged trees are especially vulnerable to extreme weather for several years or even decades—especially the largest and most carbon-rich trees.

Dr. Paulo Brando was part of a team studying the fire resilience of three connected forest plots at Tanguro: one burned annually; one burned every three years; and a never-burned control plot.

“Suddenly this storm sweeps through and there are chairs flying around our camp. As we were cleaning up, we had a moment of realization that we’d just sampled the tree plots the week before with a three-dimensional laser scanning system called LiDAR. We had a unique opportunity to study, with high certainty and in great detail, how each of the three plots survived the storm,” Brando said.

The team had published a landmark study in 2014 establishing that fires leave surviving trees more vulnerable to other stressors like drought for decades to come. The windstorm allowed the team to take their study one step further: How does fire affect tropical forest’s durability in windstorms, and what can that tell us about their survival in a climate-changed future?

The 2019 study, published in the Journal of Ecology, showed that not only were trees in the burned plots more likely to be uprooted or snapped (often at the height of fire scars), but that damage was much more likely to prove fatal over the following years. The damage was greatest around the edges of the plots, showing the compounding dangers of forest fragmentation.

LiDAR (light detection and ranging) measures distance to a target using pulses of laser light to make three-dimensional digital representations. When used by Woodwell Climate Research Center (formerly Woods Hole Research Center) scientists in forests, LiDAR can measure tree height and size, capturing the canopy in incredible detail and converting it to data that can be analyzed.

“The lesson is that even areas that look like they’ve survived initial burning will continue degrading in ways that are unpredictable, non-linear, and worsened by global warming. We can’t separate out the effects of burns, drought, and climate—they can interact in unpredictable ways,” Brando said. “It’s critically important that we learn all we can about how to protect the forest’s remaining canopy, especially for the oldest and largest trees that provide the most wildlife habitat, cycle the most moisture through the ecosystem, and store huge amounts of carbon. By keeping large chunks of forests, we reduce degradation, because there is less vulnerability than there is on the edges.”