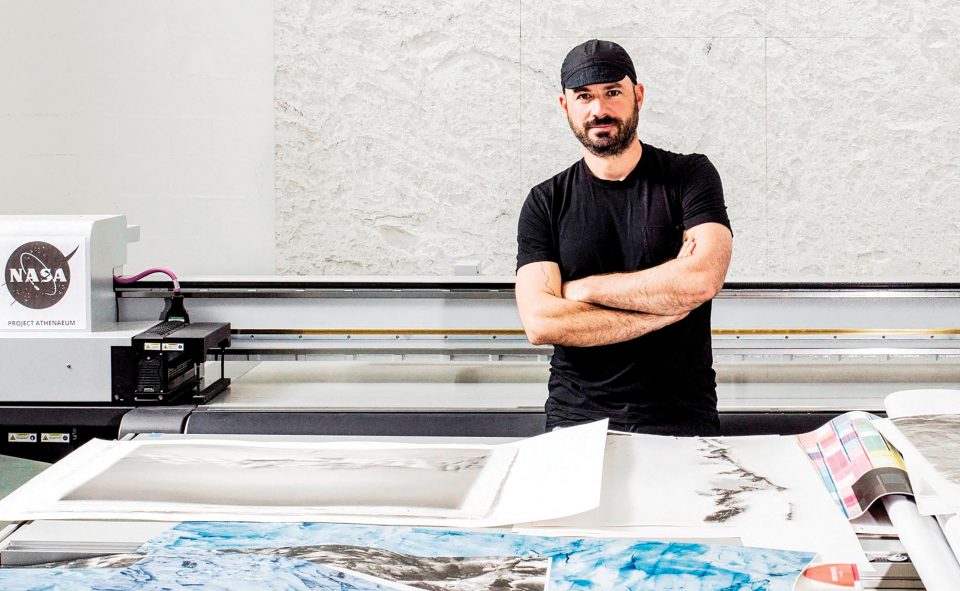 In April, Guariglia’s work was featured as part of Earth Day 2019 by the Somerset House in London. REDUCE SPEED NOW! used large, solar-powered LED roadside signs to highlight the words of poets, writers and philosophers from around the world, exploring how people can navigate the complex issues surrounding the global climate crisis. The modern signs formed a striking installation in the Somerset House’s neoclassical courtyard. Visitors were also invited to submit their own writing for display over the course of the installation. Then in May, Guariglia opened EXXTINCTION, an official collateral installation of the Venice Biennale.

Based in New York City, Guariglia works closely with scientists, philosophers, and journalists to inform his work, allowing him to communicate effectively some of the most complex ecological challenges faced on the planet today. Last summer, Guariglia traveled with Woodwell scientists to Alaska to get a first-hand look at thawing permafrost, aiming to open an exhibition at the Anchorage Museum in 2021, which will subsequently travel to additional venues.

“Artists like Justin can interpret science in a completely different way to engage new audiences and draw out different responses,” said Alison Smart, Woodwell Vice President for Strategy and Advancement.

Woodwell Climate interviewed Guariglia about what inspires his art.

The contrast of your LED boards in front of the 223-year-old Somerset House is striking. What’s it like bringing your work to places like London and Venice?

It was exciting to be able to bring the work to London as a new iteration. One of the things I’ve come to realize is that no single individual can solve this issue—it must be solved on a broad, collective level, and I feel that when we talk about art engaging with the subject, it’s the same—it needs a more collective approach. It should not be about the one, but the many.

I wove together what I felt was a good representation of voices from the front lines—poets, philosophers, activists, writers and indigenous elders, and each would have their own large solar powered highway sign devoted to their message. We led with the French philosopher Bruno Latour, and had other contributions from people like Zadie Smith, but also lesser known writers like poets Kathy Jetñil-Kijiner and Aka Niviâna who wrote this amazing poem entitled “RISE” commissioned by 350.org, and an indigenous poet from Guam, Craig Santos-Perez who contributed a remarkable sonnet that was inspired by the love sonnets of Pablo Neruda.

I even snuck one of my own signs into the mix—an incomplete list of animal species that have gone extinct over the past 200 years. Adding agency to the work, two days before it debuted, the UN announced in a report that an unprecedented one million species may go extinct, many over the next two decades.

I think Earth Day itself can broadly raise the public consciousness—so it acts as an important reminder, but one of the things I’m exploring in my work is how to sew these Earth Day ideas into people’s minds, so that they can effectively live with these sentiments, and understand the urgency of the message. For scientists at Woods Hole and those focused on these subjects, including my studio, every day is effectively Earth Day, but how do we get the general public thinking about the Earth every day? I suppose that is my challenge as an artist and what preoccupies most of my days.

How has partnering with Woodwell Climate impacted your work?

Research is everything for the type of work that I do. The science and scientists are a critical component to trying to access this “hyperobject” we call climate change. If you’re not a scientist, Inuit, farmer or someone that is physically on the front lines of this problem, it’s almost impossible to understand the magnitude of the issue. So partnering up with WHRC has been imperative for me and my work.

What’s next for you?

We’re collaborating with the Anchorage Museum to create a traveling exhibition of my work that comes out of my collaboration with Woodwell Climate, which will debut in Anchorage in 2021 and travel to other institutions from there, so I still have a couple more years to keep researching and working.

In addition, we’re working on 18 shows, exhibitions and projects right now through 2021. This includes my first major museum show in New York City in Fall of 2020, so it’s a bit overwhelming at the moment. I also really want to get back up to Woodwell Climate and spend some time with the scientists, as well as to get back out into the field.