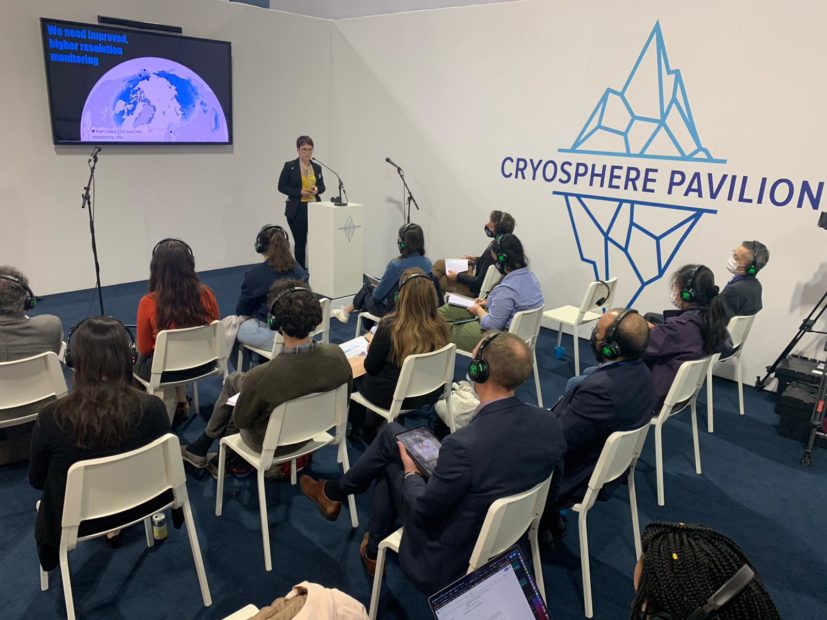 Rachel Treharne speaks in the Cryosphere Pavilion at COP26.

As climate talks in Glasgow head into their second week, Woodwell Climate Research Center joins mountain and polar groups at COP26 calling for more consideration of the dire global impacts that will result from the loss of glaciers, ice sheets, and permafrost should governments not take greater action.

These research, environmental, and Indigenous organizations span the global “cryosphere” (snow and ice regions), from the poles to the high mountain Asia “Third Pole.” They believe that the poor understanding by governments of the real implications of the cryosphere poses a dangerous issue for climate goals. As a matter of urgency, the groups are asking COP26 to approve a decision point mandating the UNFCCC to arrange a day-long meeting, or “Cryosphere Dialogue,” at the next inter-sessional climate conference, scheduled to take place in Bonn in June 2022.

“For too long, our planet’s frozen elements have been absent from the climate debate at the UNFCCC, even though their crucial role in determining the future for more than a billion people and our climate is becoming ever more clear,” said Dr. Martin Sommerkorn, IPCC SROCC author, of the WWF Arctic Programme. “The UNFCCC must urgently create space for Parties and stakeholders to discuss actions to be taken in response to this cryosphere crisis.”

The groups note that despite the dire consequences noted in the IPCC’s August report there has never been a full discussion of the irreversibility of projected changes in the cryosphere at climate talks. In contrast, the UNFCCC has held Dialogues on oceans and lands.

Dr. Rachael Treharne from Woodwell Climate Research Center explained, “Thawing Arctic permafrost makes carbon that has been locked in the deep freeze for millennia vulnerable to release into the atmosphere. It’s critical that international mitigation policies address this catastrophic regional and global hazard.”

“Negotiators may think they know about melting ice caps, but what they don’t realize is that the impacts are essentially permanent on human timescales, and catastrophic for humanity,” noted Dr. Robert DeConto, a leading researcher with one of the groups, the Scientific Committee for Antarctic Research (SCAR). “Once the collapse of the West Antarctic Ice Sheet begins, it will be effectively impossible to halt,” agrees Jonathan Bamber, Director of the Bristol Glaciology Centre and a multiple IPCC author.

Pam Pearson, Director of the International Cryosphere Climate Initiative, which is hosting a Cryosphere Pavilion at the conference, said. “The questions by governments during discussion of the latest IPCC report last week underscore that this issue needs more than a 15-minute presentation.”

“The polar regions are no longer an early warming signal for climate change,” concludes Professor Dame Jane Francis, Director of the British Antarctic Survey. “Instead, they are now a driver of climate change and this reality needs to be better understood.”

The other organizations and institutions include the International Centre for Integrated Mountain Development (ICIMOD), the International Arctic Science Committee (IASC), Grantham Institute at Imperial College, Bolin Centre at Stockholm University, and the National Snow and Ice Data Center at University of Colorado Boulder.