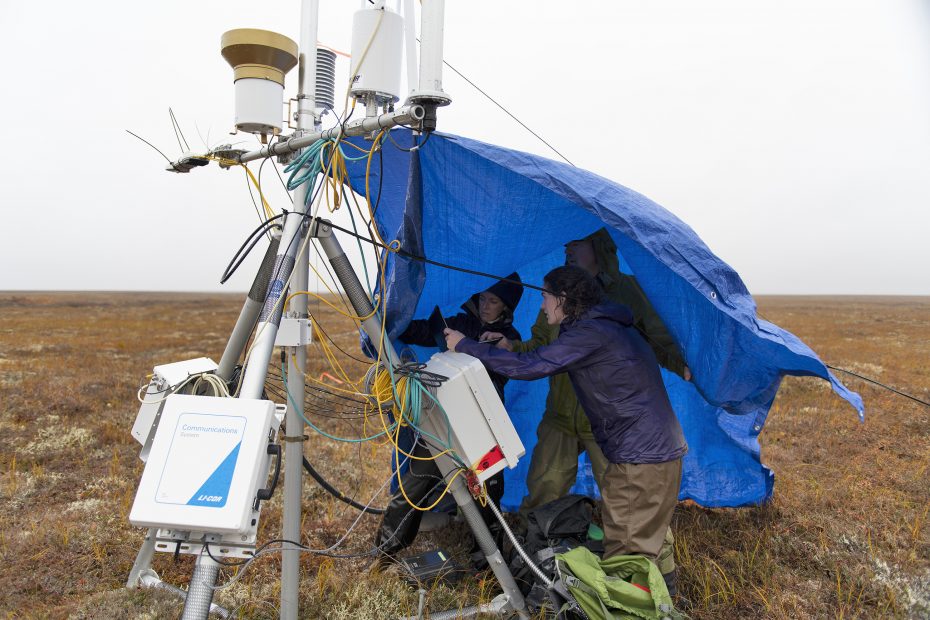 With initial funding from a new $2.4 million grant from the Gordon and Betty Moore Foundation, Woodwell Climate Research Center (formerly Woods Hole Research Center) is launching a major campaign to gain new understanding on how quickly permafrost regions are changing and what that means for global climate projections.

The Arctic Carbon Monitoring and Prediction System is being launched in conjunction with the Harvard Kennedy School’s Belfer Center for Science and International Affairs, and will deliver crucial new research to inform upcoming international climate negotiations. Woodwell Climate will lead the scientific aspects of the work, with the Arctic Initiative at the Belfer Center overseeing the policy components.

The first steps in expanding Woodwell Climate’s Arctic monitoring took place this year in Alaska’s Yukon-Kuskokwim River Delta when scientists installed two new flux towers, which monitor the exchange rates of trace gases, funded in part by the Moore Foundation’s grant. The first was installed during the summer 2019 Polaris Project expedition and the second was installed during a follow-up trip by Woodwell scientists this month. The towers will measure carbon uptake by plants and emissions from plants and soils, including from thawing permafrost, sending real-time data via satellite back to Woodwell Climate’s Falmouth campus.

From Alaska to Siberia, permafrost holds significantly more carbon than has ever been released by humans. As rising temperatures thaw permafrost, the resulting carbon release has potentially disastrous consequences for accelerating climate change. But thawing permafrost carbon had not yet been included in the models and reports that inform international climate policy by the United Nations Framework Convention on Climate Change (UNFCCC).

“As we look ahead to the next generation of global climate progress, there’s an urgent need to collect the best data on Arctic carbon emissions and turn that into sound policy,” said Dr. Sue Natali, Woodwell Arctic Program Director, and Director of The Polaris Project.

Woodwell Climate’s Arctic Carbon Monitoring and Prediction System will include:

Woodwell Climate will continue to seek sponsoring partners for the Arctic Carbon campaign to help deliver the funding necessary to support this critical climate research. To learn more about supporting this initiative, contact Beth Brazil at bbrazil@whrc.org or 508-444-1549.