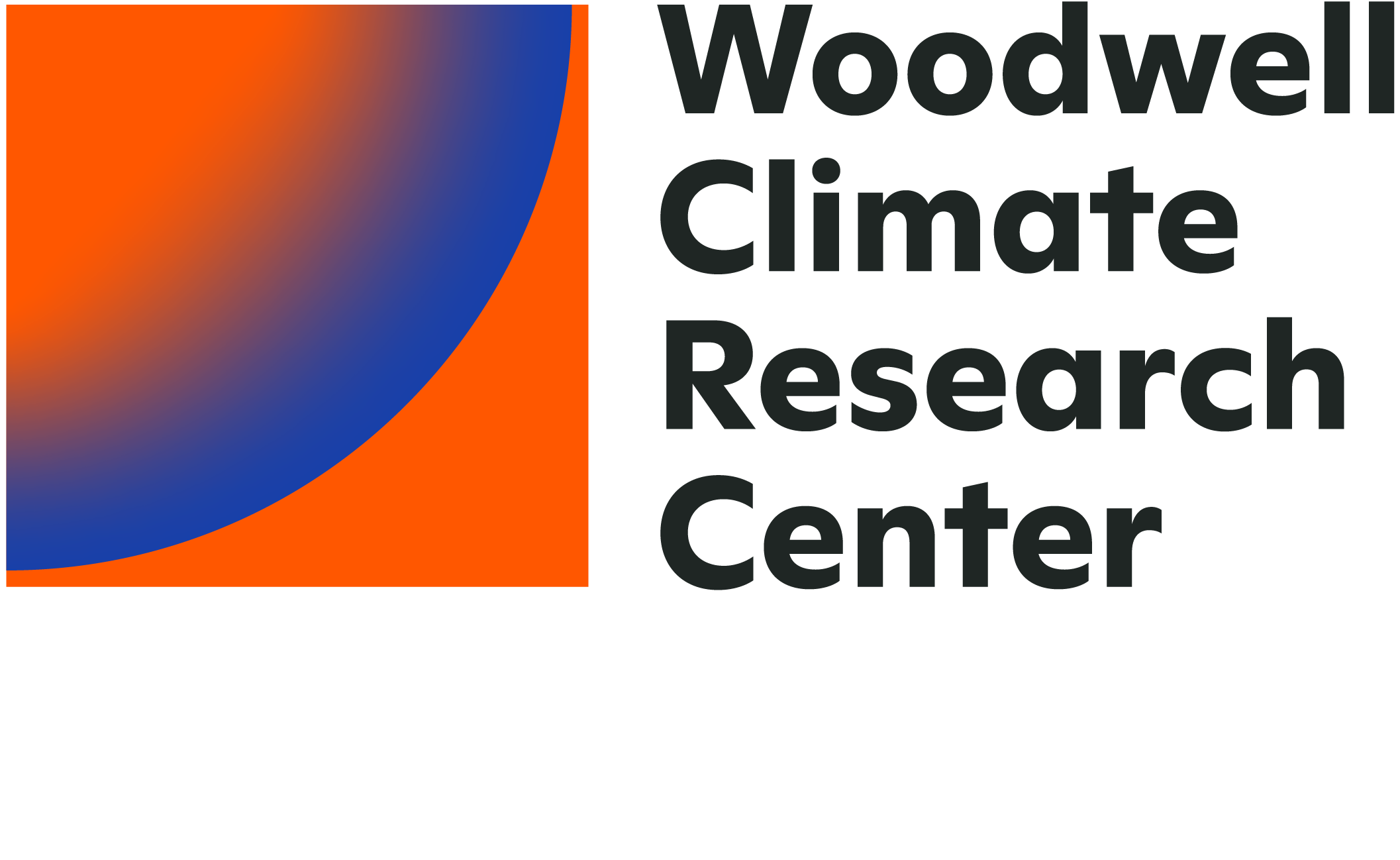 In 2019 and 2020, fires raged through the Amazon. Unusual in years without extreme drought conditions, the cause lies in a new upward trend in deforestation, which has reached levels not seen in over a decade. This spring, deforestation levels jumped even higher than the previous two years. This, combined with widespread drought conditions, has raised concerns about fires during this burning season, which typically begins in July and lasts up to four months.

Long-burning and intense fires are not a natural feature of the Amazon, but the normally humid conditions of the rainforest are being rapidly altered by human activity. When forests are cleared, the dead trees and brush are piled up to dry out, creating fuel that is burned to complete the cycle of deforestation. These intense fires can leak into forests and, if combined with drought conditions, can cause widespread damage. Such drought conditions are becoming more common as a result of both local deforestation and global climate change. In addition, these fires release carbon dioxide equivalent to tens of millions of cars, creating a vicious cycle that warms the planet and creates conditions for ever more intense fires.

The Brazilian federal government has authorized the use of military forces to combat deforestation over the next two months. They have also declared a nation-wide fire ban. However, fires continued to escalate under a similar ban last year, highlighting the need for more effective strategies.

Fire-fighting in the Amazon is limited by a lack of both funding and accurate information on where the risk of fire is highest. Combining available satellite data on past deforestation and fires with climatic analysis, we assess areas at highest risk of burning (dark “extreme” on map below) during Brazil’s 2021 fire season. 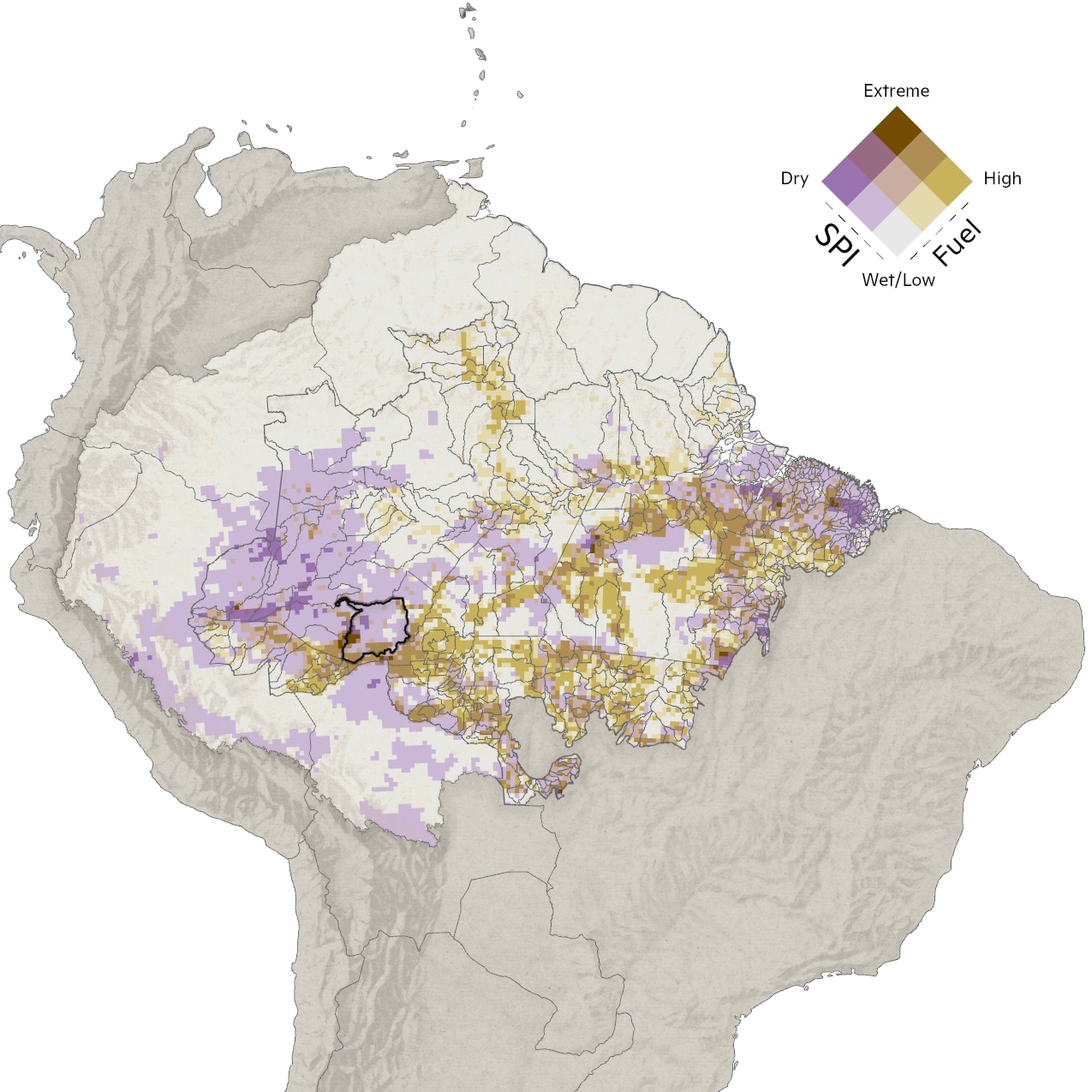 Official deforestation data shows more than 10,000 square kilometers of rainforest were deforested in 2019—the highest numbers in more than a decade—and nearly the same occurred again in 2020. Preliminary numbers from 2021 show the rate of deforestation increasing.

An overlay of deforestation alerts from DETER-INPE, an official Brazilian monitoring system, with active fire data from NASA shows that almost 5,000 square kilometers of area deforested since 2019 has not yet burned (gold)—meaning those areas are tinderboxes of fuel waiting for a spark. Many of these fuel-heavy areas are adjacent to standing forests, making them prime locations for fires to jump from cleared land to remaining forest.

To make matters worse, the southern Amazon this year has been experiencing drought conditions (purple) carried over from 2020, likely related to ongoing La Niña in the Pacific ocean and continued warm sea surface temperatures in the tropical north Atlantic. The drought has also been exacerbated by increasing average temperatures due to climate change. Warmer temperatures increase evaporation and reduce soil moisture, which increases flammability. Droughts like this will place increasing pressure on remaining forests, particularly in the southern Amazon.

Comparing areas of high fuel load with a drought index identifies areas at the highest risk of escaped forest fires this year. Municipalities in the southern and central Amazon are extremely high risk, particularly northwestern portions of Mato Grosso, much of Rondonia, eastern Acre, and a long stretch of the trans-Amazon highway, which cuts through Para and other southern Amazon states. Lábrea, a municipality in the state of Amazonas (outlined in bold on the above map), is both high in fuel and experiencing extreme drought, a high-risk combination that could worsen as the burning season progresses. 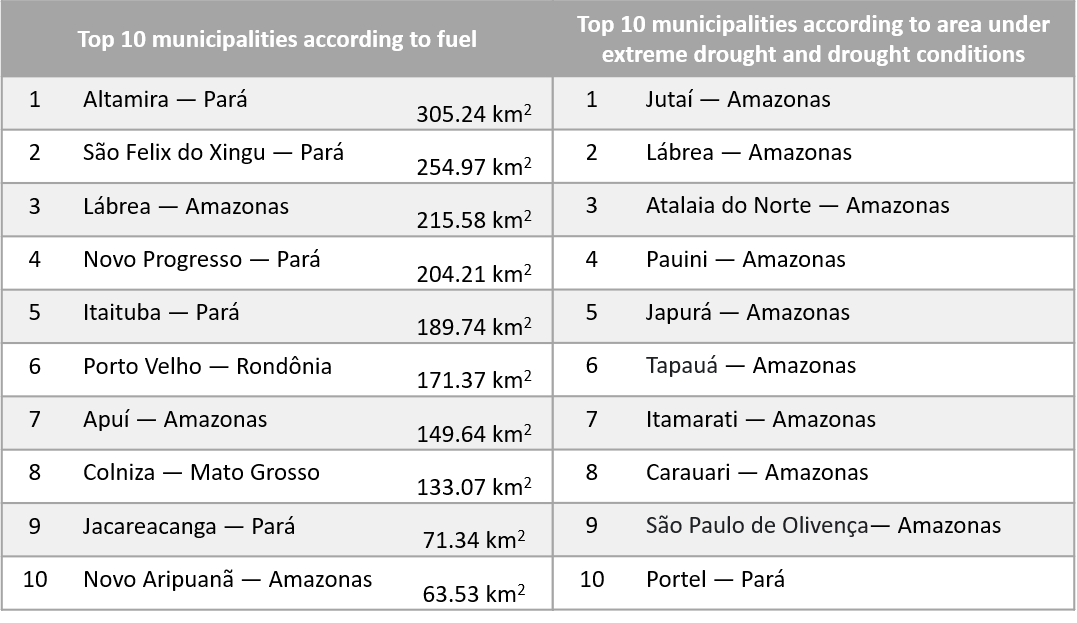 Overall, more than one third (35.5%) of available fuel is concentrated in just 10 municipalities. Though not all of these municipalities are experiencing drought, areas with high fuel loads should be watched closely, regardless. Any fires set to burn downed trees pose a threat to neighboring forests, even in non-drought conditions.