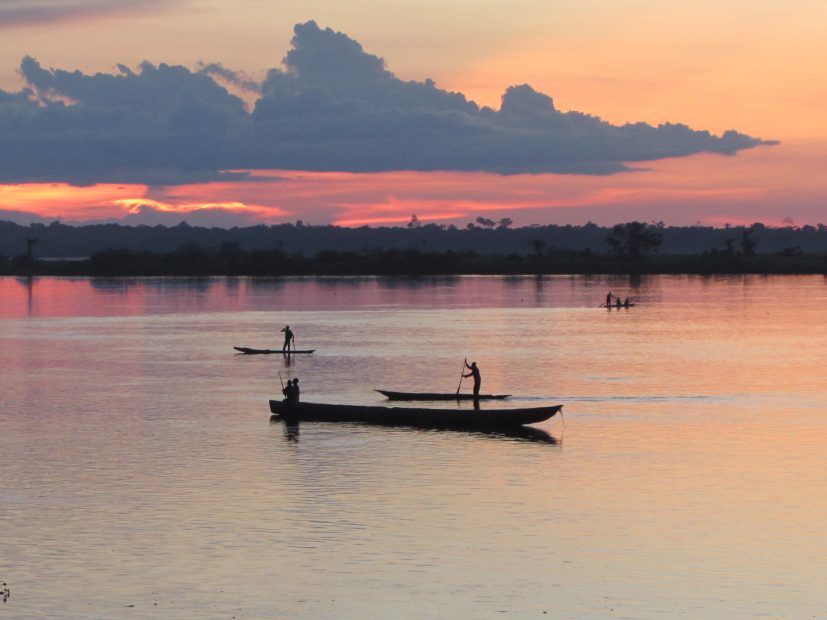 Few tropical forest regions in the world face more growing risk—or more opportunity for primary forest protection—than the rainforest of the Congo River Basin, the second-largest in the world behind the Amazon. Decisions made in the years ahead will determine if it remains intact or bends under the pressure of development.

Much like Woodwell Climate Research Center has partnered in the Amazon with local groups to deliver breakthrough science and coalition advocacy through our Tanguro Ranch partnership, Woodwell Climate provides the scientific support and expertise to help the Democratic Republic of Congo (DRC) build a sustainable future. Led by Woodwell scientist Dr. Glenn Bush and Projet Équateur Forests and Climate Change Coordinator Joseph Zambo, we work with community leaders to understand which forests we should protect, why and how. 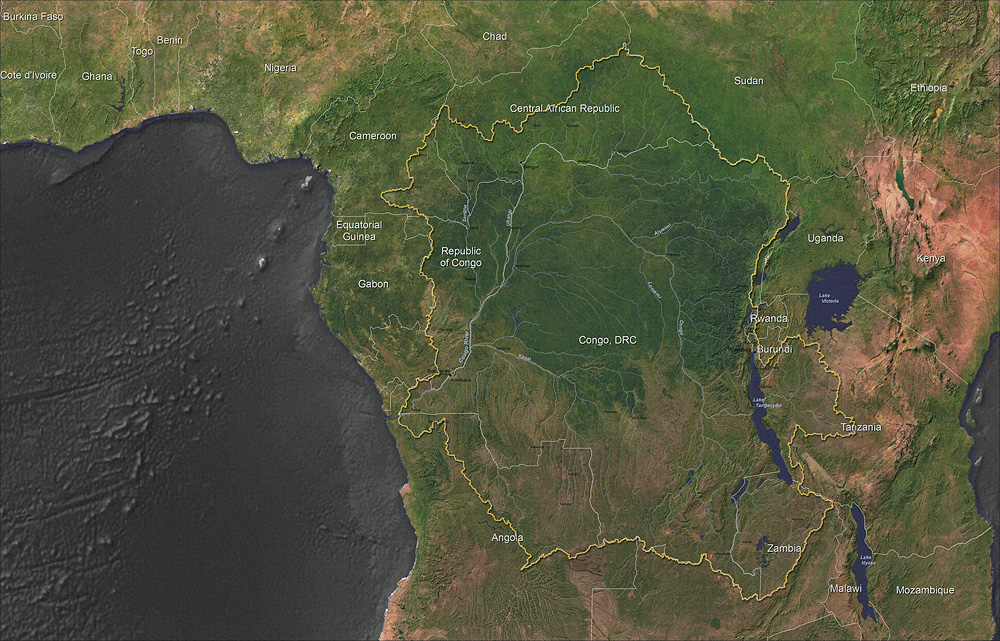 The Congo River Basin is home to a quarter of the world’s remaining tropical forest, one of the largest reservoirs of forest carbon in the world, estimated to store 23 billion tons of carbon in its trees and vegetation. The river itself, like its surrounding forest, is the second-largest in the world by volume behind the Amazon. The Congo rainforest is known for its high levels of biodiversity, including more than 600 tree species and over 10,000 animal species. It’s home to rare and endangered apes, like chimpanzees, bonobos, and gorillas, elephants, and the critically endangered northern white rhino and the endemic okapi.

Over the last half century, as development has gnawed away at the world’s other tropical forests, the Congo’s rainforests have remained largely intact. Unfortunately, that protection may have largely been the result of historical political chaos and economic collapse. 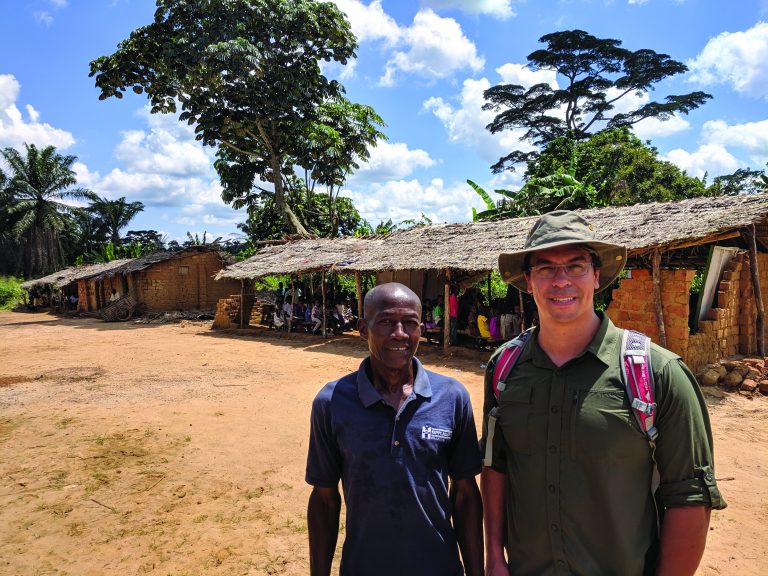 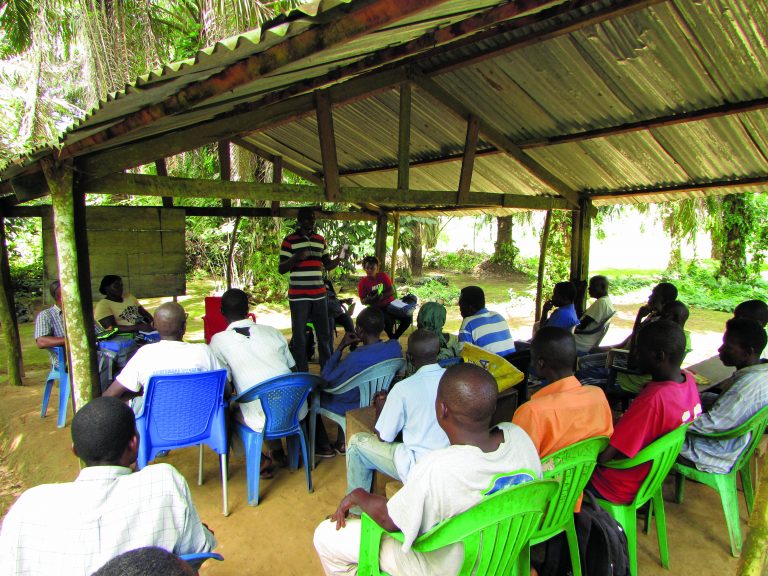 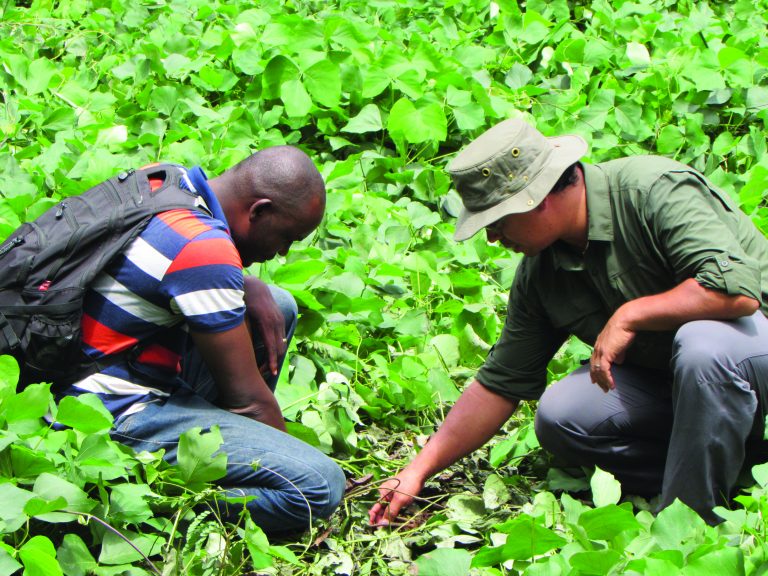 Decades of mismanagement beginning with former president Mobutu Sese Seko (who named the country Zaire) led to complete economic breakdown. GDP per capita plunged from $1,134 in 1974 to $276 in 2001, according to the US Federal Reserve and adjusted to today’s dollars. Recent years have seen some renewed growth, with GDP per capita climbing back to $409 in 2017, but 82 percent of Congolese residents live on less than $1.25 a day, according to the International Monetary Fund.

If all that wasn’t enough, the DRC has been plagued by a series of Ebola and measles outbreaks, several major volcanic eruptions, and major flooding in both October 2019 and April 2020.

Today, there is hope the DRC could be taking early steps down a road to peace and prosperity. After a new constitution took effect, a national election was held in December 2018. President Félix Tshisekedi took office in January, and the transition of power was smooth.

While renewed prosperity would be an obvious benefit to the 92 million citizens of DRC, it would bring uncertainty for the Congo River Basin forest. If industry finds DRC a more appealing place to do business, logging, mining, industrial agriculture, and the roads that come with them will undoubtedly lead to further degradation and fragmentation of primary forest. Woodwell Climate’s agenda is primary forest conservation and forest landscape restoration to achieve low or zero emissions development in the land use sector.

There’s a massive gap right now between the opportunity for protecting these forests, which provide huge carbon stores and ecosystem services, and the resources available for protection.”

Dr. Bush, who has a doctorate in the economics of tropical biodiversity conservation and forest management, has spent more than a decade helping connect Woodwell Climate’s science with Congolese political leaders and communities. After starting his career in agriculture, first managing a Ugandan coffee plantation, Dr. Bush connected with Woodwell Climate researchers at a conference and developed a plan to look at the drivers of forest change. Dr. Bush has since become a leading voice connecting scientific organizations to both officials in the Congolese capital of Kinshasa and communities far up the difficult-to-navigate Congo River.

“I built on Woodwell Climate’s long-standing connection with the Ministry of Environment on forest conservation. My experiences in other countries in Africa helped open some doors, but mainly, you just have to go and talk to people and let them know you understand their challenges, That’s how relationships grow. You meet people and you connect to them, become a trusted partner,” said Dr. Bush.

He sees tremendous opportunity for forest conservation and almost endless needs for scientific expertise that Woodwell Climate and its partners can provide.

“DRC is a high tropical forest, low deforestation country. There aren’t many places that have so much primary forest and degraded land that can be rehabilitated left in the world. The Congo River Basin today is relatively untouched, but the social and economic situation is like parts of the Amazon basin was 40 years ago, the implications for forest loss are serious.” Dr. Bush said. “There’s an opportunity to get things right, from the start of the inevitable rapid economic growth phase. So much of DRC’s development policy has sustainability in mind, so we hope to leverage that to keep things moving in the right direction.”

Projet Équateur aims to educate local stakeholders in environmental and development management about the value of the forest, the risks associated with climate change, and the consequences of severe and unmitigated deforestation practices. It’s training students and professionals to develop local capacity and expertise so that they will have the tools and resources to implement and monitor successful sustainable development and forest conservation programs.

To help better understand how to conserve forests broadly, Woodwell Climate’s work focuses on a series of questions: How do communities make decisions about when to protect tropical forests and when to clear them? How much should communities be compensated to preserve their forests? How could payment be delivered to remote communities where printed currency doesn’t have much exchange value? We seek to identify ways to reduce farmers’ incentives to clear additional forests, while maintaining or enhancing their livelihoods, with the end results benefiting both local farmers and our global climate.