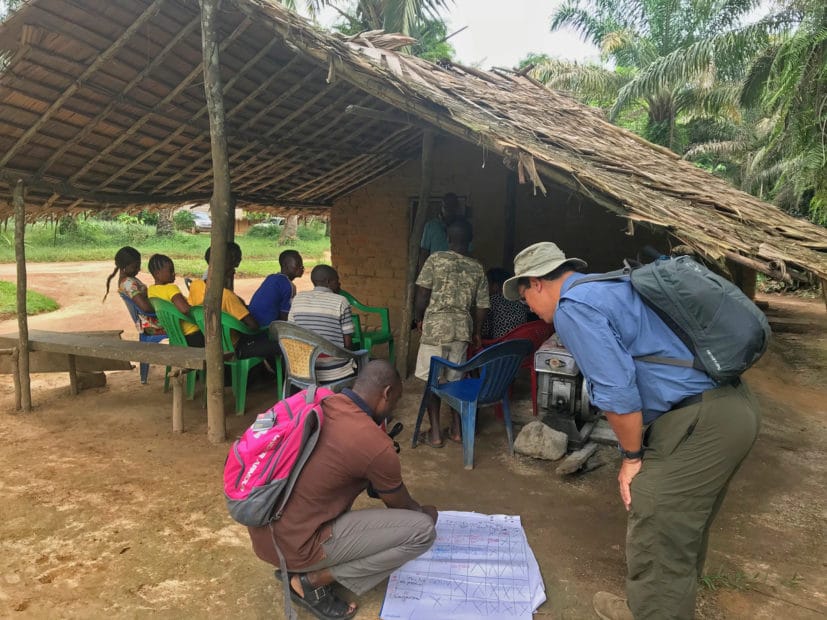 The Congo Basin in central Africa is one of the largest reservoirs of aboveground forest carbon in the world, but deforestation for expanding small-scale agriculture and fuel use is threatening this vital climate mitigation resource.

In late 2018, Woodwell Climate Research Center (formerly Woods Hole Research Center) environmental economist Dr. Glenn Bush and research assistant Nolan Kitts traveled through remote communities in the Democratic Republic of the Congo (DRC) to lay the groundwork for a survey that will help identify the economic incentives that will stop villages and farmers from clearing forests.

“We were conducting preliminary research to frame a behavioral economics study,” Bush said. “We need to understand people’s preference on states of the environment versus development benefits.”

The DRC is the largest country in sub-Saharan Africa, roughly 900,000 square miles. Bush and Kitts visited several villages in the DRC’s Equateur Province, meeting with different focus groups representing a range of social and demographic sectors within the region—including a women-only group. The information they gathered is being developed into a household survey for five different communities, chosen along a spectrum from most to least deforested. The survey of 350 households will be conducted in May, with final results available in August.

“The goal of this survey is to understand, broadly speaking, the environmental concerns and development concerns of the communities that live on edge of this deforestation, and understand the nexus of issues,” Bush said. “The application of this study will be to design effective packages of support to achieve these conservation and development outcomes. But we need to first quantify the local drivers of deforestation and the incentives that will help stop that deforestation.”

Bush said that he also plans to put the results into an academic paper, and develop research briefs for Congolese officials to help inform national policy decisions.