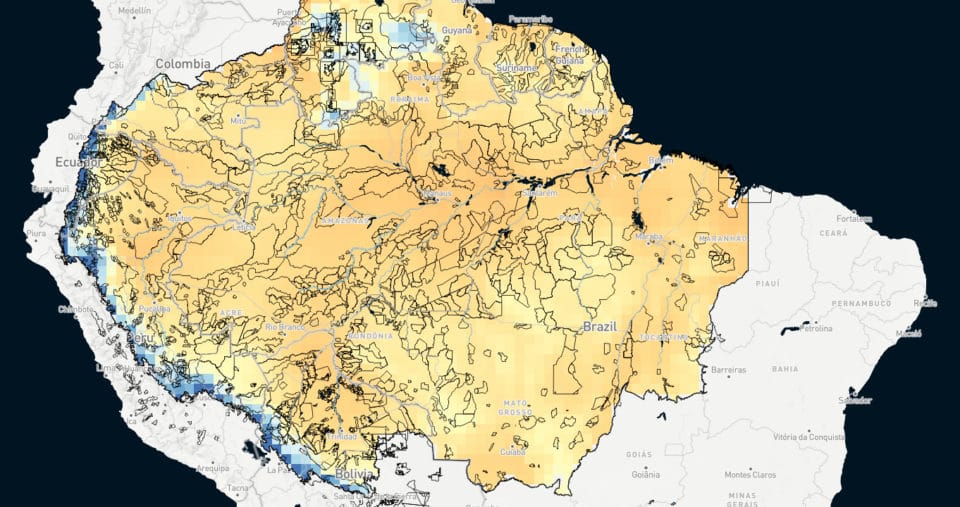 Over the past year, Woodwell Climate Research Center (formerly Woods Hole Research Center) and our partners held a series of workshops to deliver the latest climate change science to the people directly responsible for managing protected areas and indigenous territories in the Amazon forest. The fifth and final workshop took place in Brasilia from May 8-11, Amazon Indigenous Peoples: Combining Traditional Knowledge and Technical Data for Political Action.

Woodwell Climate’s Climate Source web tool summarizes key datasets for over 4000 Amazon indigenous territories and protected areas, showing changes in  the length of the dry season, rainfall, temperature, biomass, and other factors. Some participants report facing major floods, while others reported ongoing droughts, wildfires, and food insecurity. The workshop helped them discuss shared obstacles and solutions, as well as the challenge of managing transboundary areas.

“Climate change is an overwhelming global challenge, and its impacts vary depending on where you live.  By breaking down this data at the local level, we make the problem more tangible for individuals and communities,” said Dr. Macedo, a dual citizen of the U.S. and Brazil who has been working on Amazon protection since 2000.

While that often leads to difficult conversations about the future, it can also inspire creative solutions and collective action. “Looking at the science through the lens of the people most affected by climate change makes it much more clear—to the heart as well as the head—what’s at stake,” she adds.

This workshop comes at a critical moment, just after a major demonstration to defend indigenous land rights in Brazil and just ahead of two key United Nations climate meetings. The Subsidiary Body for Scientific and Technological Advice (SBSTA) meeting will take place this June in Bonn, Germany, followed by the Conference of the Parties (COP25) in December in Santiago, Chile.

Through their land rights and advocacy, indigenous peoples have helped conserve millions of hectares of pristine forests across the Amazon Basin. Worldwide, tropical forests store 230 billion tons of carbon. Each year they absorb over 1 billion tons of carbon from the atmosphere, more than 10 percent of fossil fuel emissions.

“It was gratifying to see participants connecting the science in the portal to what they’ve observed as effects of climate change on the ground. That gives confidence that the changes they’re noticing are part of a global context. Indigenous communities are already aware of the importance of protecting the Amazon forest, but this data makes their argument for preservation much stronger,” said Dr. Andréa D. de Almeida Castanho, Woodwell Research Associate.

Woodwell Climate and IPAM plan to expand this work with indigenous coalitions by training local leaders to use the Climate Source in their own communities and build capacity for sustained policy action.