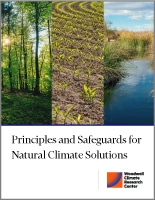 Avoid degrading ecosystems that have high carbon stocks or biodiversity value, and restore those that have already been degraded.

The carbon stored in high-carbon ecosystems may take decades to centuries to replace if the stocks are lost. Avoiding the fragmentation or degradation of these ecosystems can result in an immediate reduction in emissions and can help protect biodiversity. When possible, restore degraded land to native vegetation and biodiversity while increasing carbon stocks to levels consistent with the potential of the site.

Plants naturally remove carbon dioxide from the atmosphere through the process of photosynthesis, converting CO2 to carbon that is then stored in the biomass of leaves, branches, stems, roots, and soil. The carbon stored in the biomass and soils of high-carbon ecosystems can be lost quickly and take decades to centuries to replace. Because high-carbon ecosystems are relatively rare, they may also have great value for biodiversity. For example, mangrove ecosystems store some of the highest amounts of carbon on earth, and are critical habitats for many different marine and freshwater species (Sanderman et al. 2018). Biodiversity helps sustain ecosystem services by supporting the health and resilience of ecosystems, enabling them to resist or quickly recover from disturbances (Seddon et al. 2021). Both protecting high-carbon ecosystems from degradation or conversion to another land use, and restoring those that have been degraded, can avoid emissions of stored C or increased removal of CO2 from the atmosphere

Older forests with high carbon stocks can continue to remove CO2 from the atmosphere for many decades or centuries depending on species, geography, climate, and natural disturbances (Curtis and Gough 2018). It has also been shown that rates of carbon accumulation in most tree species increase continuously with tree size (Stephenson et al. 2012) such that the largest 1% of trees globally store half of the aboveground biomass (Lutz et al. 2018). Avoiding the fragmentation or degradation of existing tracts of primary forest, and protecting the largest trees where they occur outside of primary forest, should be prioritized when implementing NCS strategies.

Terrestrial wetlands cover about 71 million hectares in the U.S. About half is forest, and 23% is peatland which contains very high carbon stocks (Kolka et al. 2018). Besides storing large amounts of carbon above- and below-ground, terrestrial wetlands are significant carbon sinks of about 55 million metric tons per year. The main threats to terrestrial wetlands have been vegetation removal, surface hardening, and drainage (U.S. EPA 2016). Despite U.S. policies to avoid wetland conversion, losses to development and other competing land uses still occur.

Tidal wetlands and estuaries constitute additional areas with high carbon density. These areas are extremely active ecosystems since they receive large quantities of soil and organic matter from the land, some of which is stored and some is exported to the coastal ocean (Windham-Meyers et al. 2018). Tidal wetlands in particular are among the strongest long-term carbon sinks per unit area because carbon accumulates continuously in sediments (Chmura et al., 2003). Tidal wetlands (including mangroves) and estuaries are threatened by rising sea levels, chemical runoff from the land, and disturbances such as hurricanes and development.

Arctic and boreal ecosystems store large quantities of carbon in soils that is vulnerable to release to the atmosphere from warming temperatures and increases in natural disturbances such as wildfire and insect outbreaks (Schuur et al. 2018). This is especially true in the frozen soils (permafrost), which store twice as much carbon as is found in the atmosphere (Zimov et al. 2006). The circumpolar permafrost zone is particularly vulnerable to warming temperatures that can thaw perennially frozen ground and cause the release of stored carbon as carbon dioxide and methane (Romanovsky et al. 2016). Wildfire is of particular concern and degraded boreal forests may be more vulnerable to severe impacts. The human influence is increasing in some areas, and near communities, more intensive land management may be needed to reduce the risk of wildfire or to suppress fires that ignite (Breen et al. 2016).

How the principle may be applied to primary forests

Primary forest is often defined as any naturally regenerating forest of native species characterized by relatively modest levels of human disturbance, and may include intact, old-growth, and ecologically mature forest (Mackey et al. 2020). In many parts of the world, ‘primary’ forest is synonymous with ‘high carbon’ forest, i.e., a relatively long-lived and largely undisturbed forest that has been accumulating and storing carbon for long periods of time. Compared to well-known forest-based NCS approaches such as reforestation (replacing forest on deforested land) and afforestation (planting new forest), which both depend on the availability of land and the survival of small trees, restoring and maintaining existing forests with long-established carbon storage and the sequestration capacity of the larger, older trees growing within them can have an immediate and large effect by avoiding emissions from biomass and soils. Avoiding logging of primary forest, which can take decades to centuries to replace, is not only a more immediate and cost-effective approach to achieving forest-based negative emissions (Houghton and Nassikas, 2017), but it also serves to maximize associated co-benefits, including biodiversity enhancement, improved resistance to natural disturbances and resilience after events, improved air and water quality, flood and erosion control, and human health and well-being (Moomaw et al. 2019).