Ahead of fires that plague the Amazon in August and September, scientists from Woodwell Climate Research Center (formerly Woods Hole Research Center) and IPAM Amazônia have issued the first-ever Amazon Deforestation and Fire Outlook. The analysis warns that deforestation in the Brazilian Amazon from January through June rose roughly 20% over the same point last year and is up significantly over the decadal average. Scientists will update the data monthly, with the goal of keeping decision-makers informed about deforestation and fire trends and their climate impacts.

So far in 2020, the Brazilian Amazon has lost more than 3,300 square kilometers (nearly 1,300 square miles) of forest, an area the size of Rhode Island. This year, as in previous years, almost all of the deforestation is taking place on unprotected lands, including private properties and federal lands without a protected status. Protected natural areas and Indigenous territories have seen little deforestation.

“This data points to a second consecutive year of rising deforestation and fires in the Brazilian Amazon, reversing what had been a decade-long trend of relatively low deforestation,” said Dr. Michael Coe, Woodwell Tropics Program Director. “We can look at this data and see where the deforestation is happening and the majority of it is illegal, people deforesting without permits on their land or stealing land from unprotected areas.” 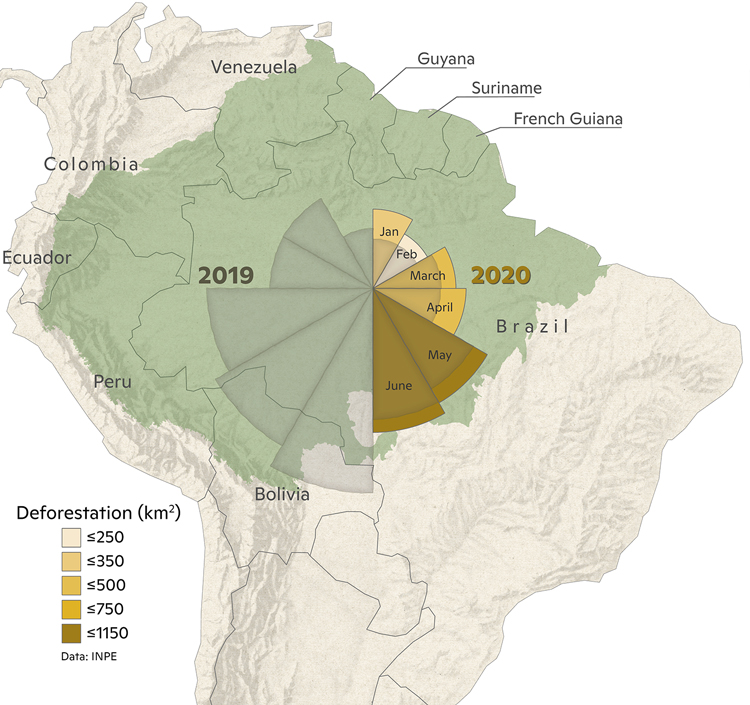 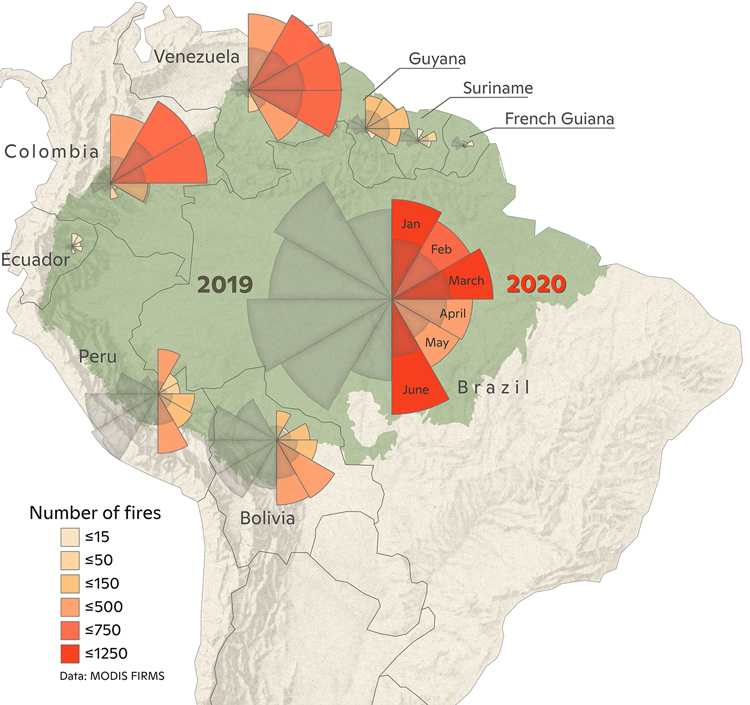 Land clearing typically happens in two waves—first the trees are cut and left to dry, then later they’re set on fire to remove the debris. Virtually all fires this year will be human-caused, as naturally-occurring Amazon fires are rare. Burning releases the carbon stored in the wood into the atmosphere. This year’s deforestation already has committed at least 115 million metric tons of carbon to eventually entering the atmosphere, equivalent to the annual emissions of 25 million vehicles, or the annual carbon emissions of the entire state of North Carolina.

“Especially with drought numbers looking worse than in recent years, our concern is that fires could escape into neighboring forests, greatly compounding the harm of deforestation. Furthermore, when the Amazon burns it will not only create carbon emissions, but also intense air pollution that will exacerbate the public health crisis at a time when Brazil is seeing some of the worst rates of COVID-19 infection in the world,” said Dr. Ane Alencar, IPAM Amazônia Director of Science.

Brazilian President Jair Bolsonaro, facing international pressure to act, announced in early July that he would issue a 120-day moratorium on legal fires. While important, the long-term implications of this act are unclear. It may simply postpone burning until a later date, and it does not address the root problem of deforestation.