Though droughts and bad harvest years are occasional risks for farmers, modern agriculture is built on the assumption of a predictable and stable climate. Rising temperatures are breaking down that assumption, leaving the future of food uncertain. Two new studies put the increasing risks in sharp relief.

Seventy-two percent of today’s staple crops—maize, wheat, soybeans and rice—are grown in just 5 countries, in regions of the world known as breadbaskets. From the plains of North America to the river valleys of India and China, these regions earned their distinction for supporting hundreds of years of agricultural production with their climatic suitability.

“These regions have developed this way for centuries in the same way that human settlements have developed around water, because that’s where the resource was,” says Woodwell Research Assistant, Monica Caparas.

Caparas works on agricultural risk models. Last year, she led an analysis of crop failures in global breadbaskets, projecting the likelihood of declining yields in the upcoming decades. Her results conjured a world where these centuries-old food producing regions may no longer be so reliable. By 2030, crop yield failures will be 4.5 times higher.

By 2050, the likelihood shoots up to 25 times current rates.By mid-century, the world could be facing a rice or wheat failure every other year, with the probability of soybean and maize failures even higher. A synchronized failure across all four crops becomes a possibility every 11 years. 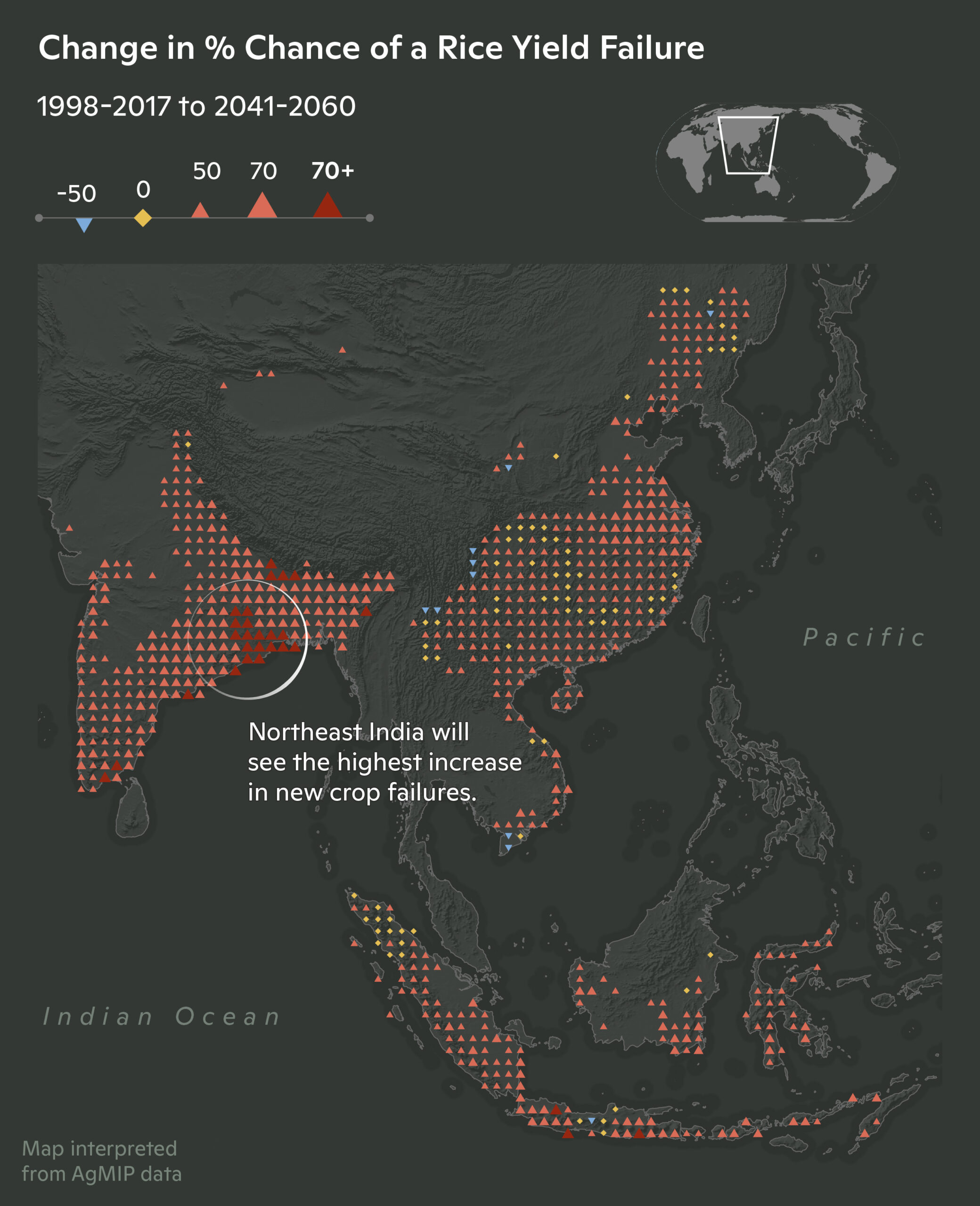 If that sounds like rapid, drastic change, that’s because it is. The immediacy of increasing failures surprised even Caparas.

“The fact that by 2050—which we are almost halfway to already— there could be a wheat failure every year. It’s startling.”

One major component of crop failure predictions is water scarcity. In a warmer world, water is a critical resource. Climate change will shift precipitation patterns, drying out some regions and inundating others. Most of the world’s breadbaskets are headed in the drier direction.

Caparas factored water availability into her analysis, finding the likelihood of crop failure much higher in water scarce sections of breadbaskets. Wheat is especially water dependent, particularly in India where 97% of wheat crops are growing in areas already experiencing water stress. Irrigation could make up for some lack of rain, but groundwater stores are already overdrawn in many places.

Farms beginning to feel the impacts of climate change in Brazil

In Brazil, agriculture is already showing signs of declining productivity from changing precipitation. Woodwell Assistant Scientist Dr. Ludmila Rattis works in Mato Grosso, where she researches the impacts of agriculture and deforestation on the regional climate. Central Brazil is a major breadbasket for soybeans and maize—as well as cattle— and as crop demand increases, farms and ranches have advanced into the Amazon rainforest and the Cerrado, the Brazilian Savanna.

Clearing and burning forests not only releases carbon that contributes to rising global temperatures, it can also have drying effects on the local watershed. In recent years, farmers in Mato Grosso and the Cerrado have reported issues with dry spells, though they would not attribute it to climate change. Dr. Rattis wanted to quantify these anecdotes to show that they were connected. 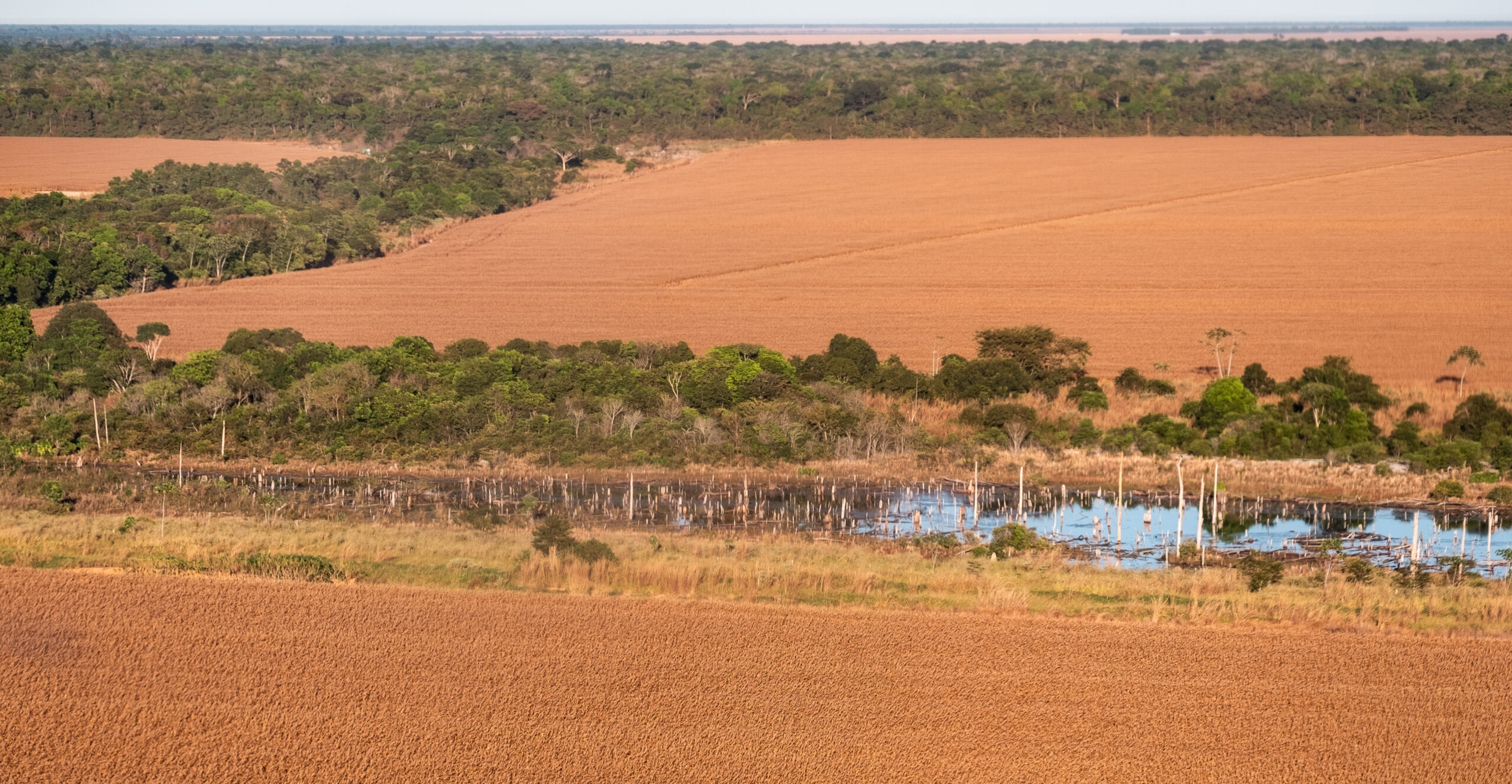 Keeping areas of forest on agricultural landscapes can help maintain the water cycle of the region.

Dr. Rattis modeled temperature and precipitation changes along Brazil’s Amazon-Cerrado frontier. Her results not only predicted that by 2060, 74% of the region’s agricultural land would fall outside of the ideal range of suitability for rainfed agriculture, they showed that nearly a third of farms already did.

The changes are affecting crop productivity. When the temperature gets warmer, plants grow faster, releasing more water vapor into the air from their leaves as a byproduct of photosynthesis. If there isn’t a steady supply of soil moisture available to replace the lost water, plant growth is stunted. Rainy seasons are also starting later, limiting the possibility for planting two rounds of crops in a single season, which cuts into farmer’s profits and encourages further expansion via land clearing.

Caparas notes that increasing crop failure doesn’t necessarily mean we are headed for a world without maize or soybean. But it does mean a drastically different agricultural system—one where hard decisions have to be made about land use.

“Increasing crop failures doesn’t mean that these crops won’t ever be able to grow in these areas again, or that they should be abandoned, just that it’s going to be much harder for them to be as productive,” Capraras says. “There might be a certain threshold of losses that would lead people to leave these croplands.”

There is some potential for migration of the most productive lands as northern latitudes begin to warm. Caparas’s projections showed the greatest likelihood of breadbasket migration from the United States into Canada.

However, just because the climate suitability is migrating, doesn’t mean agricultural production will shift along with it. Other factors including soil fertility or existing land uses could limit the practicality of moving to new regions, especially if it jeopardizes existing climate solutions as the case in Brazil has shown. Clearing forests is only accelerating warming, drought and declining productivity.

Shoring up food security in a changing climate will require system-wide changes to our current agricultural system.  Part of that starts with adjusting farming strategies to mitigate the effects of the warming that’s already unavoidable. Dr. Rattis has begun outreach to the farmers whose land she collected data on, giving them a picture of what their farms will look like if nothing changes.

“We need to make them feel that they’re part of the research, because they are. If we do, once we get the results, the probability of them using those results to adapt the way that they produce food will increase,” Dr. Rattis says. “They can see themselves in the historic part of the graphic and then I show them where, climatically speaking, their farm is going.”

She’s hoping these conversations will open Brazil’s farmers up to practices that leave more native vegetation on the landscape, which would help stabilize the local climate and keep the natural watershed intact.

Caparas draws hope from the fact that the outcomes of her models are not set in stone. In the planet-wide experiment of climate change, we can affect the results.

“These projections are due to changes in climate. They don’t account for adaptation strategies. The agricultural technology industry is fast-growing and so I think that there is hope, as long as adaptation techniques are implemented equitably,” Caparas says.

Much of the innovation, Caparas says, will have to involve developing drought resistant crop varieties and less water intensive agricultural processes. In the long term however, securing a productive agricultural future for the Earth’s nearly 10 billion people by 2050 will depend on securing a stable climate.

“First and foremost it always has to be getting climate change in check,” says Caparas.