Aerial image of a tundra landscape in Alaska.

When Dr. Anna Virkkala looked at the literature on carbon fluxes in the Arctic-Boreal zone, she noticed something was missing: maps. Namely, high resolution maps that could detail where and how much carbon dioxide (CO₂) is flowing in and out of these vital high-latitude ecosystems.

To fill this gap, Dr. Virkkala and colleagues from Woodwell joined forces with researchers from 42 other institutions in a massive community effort to pool data and analyze the patterns. The resulting paper, recently published in Global Change Biology, synthesizes the latest available terrestrial CO₂ flux data—combining field measurements from nearly 150 sites with five statistical and machine learning techniques to map the balance of CO₂ release and uptake for the entire region. 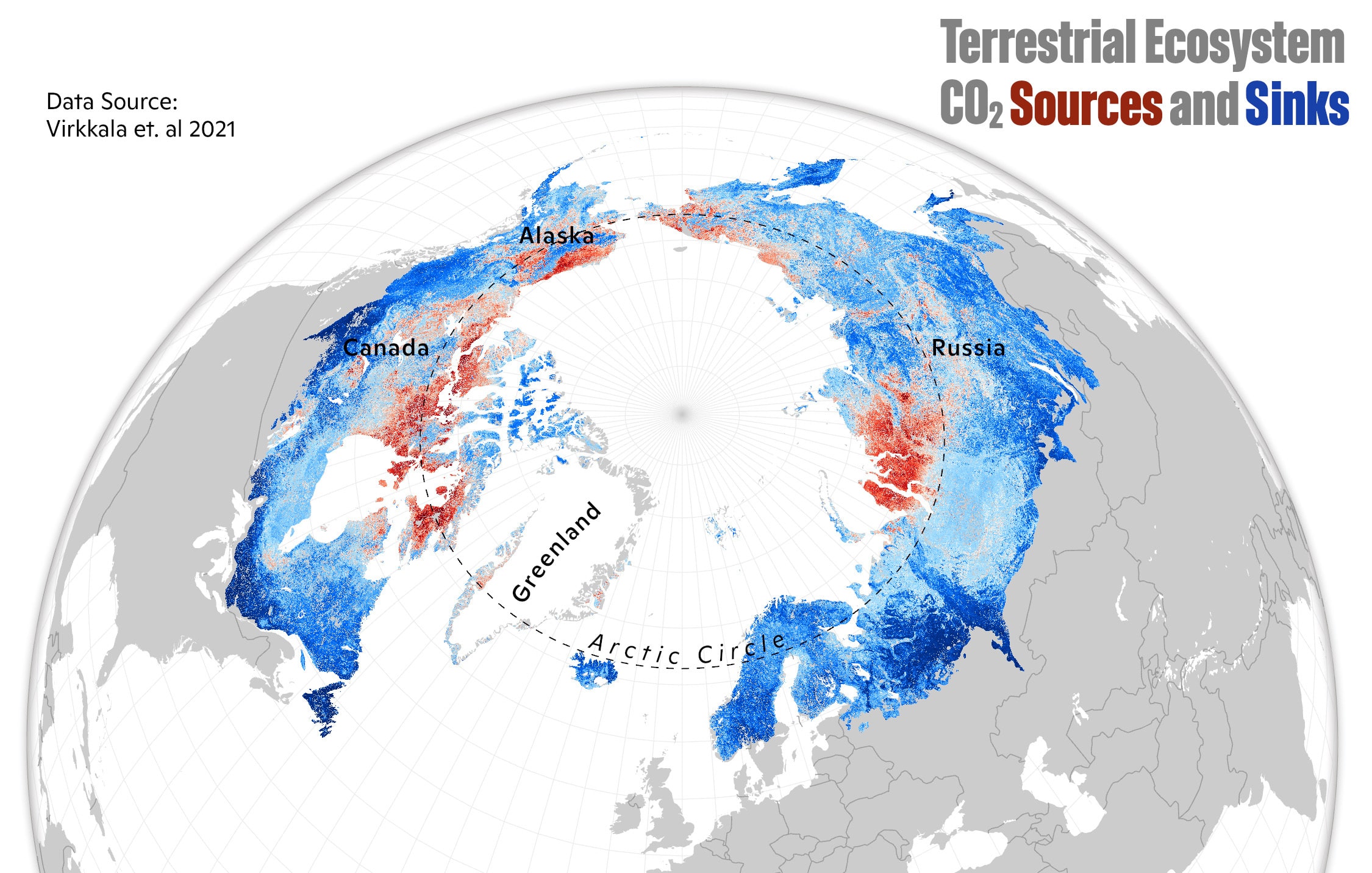 In ecosystems, flux measurements involve two component processes—gross primary productivity (i.e., photosynthesis) which draws carbon out of the atmosphere, and ecosystem respiration, which releases it back. The balance between them is the net ecosystem exchange.

In the field, researchers measure exchange using either towers or chambers placed over vegetation and fitted with carbon dioxide sensors. Tower sensors detect the concentration of CO₂ in the air, and combine that with vertical air movements to estimate the overall flux. Chamber sensors estimate flux by recording the change in CO₂ concentrations while the chamber is closed. 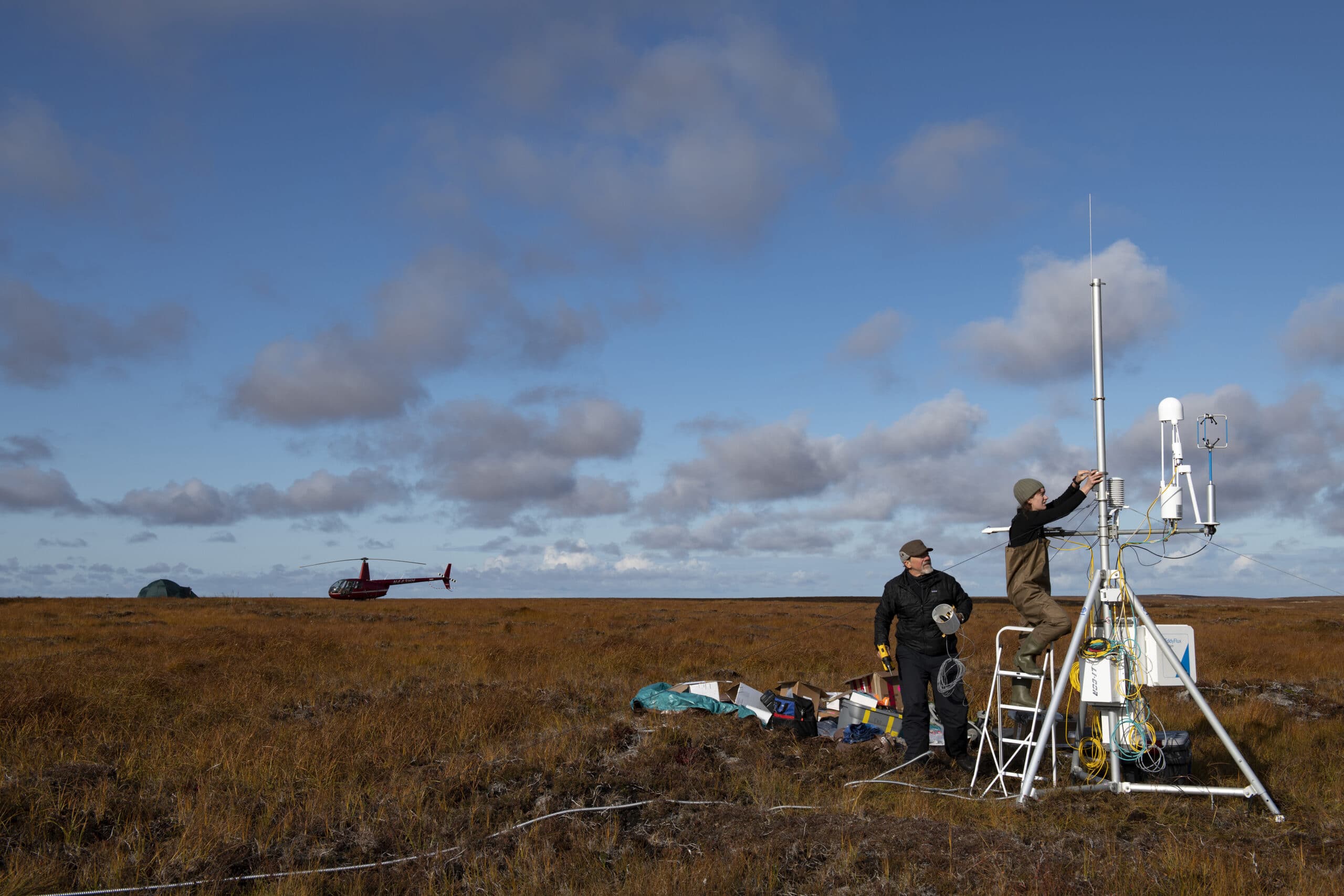 Above: Woodwell scientists install a CO₂ flux tower in the tundra near the Yukon-Kuskokwim River Delta.

These measurements formed the base of the new synthesis. Each data point acted as a touchstone to train the models Dr. Virkkala and her colleagues were using in a process called upscaling. Combining field data with high-resolution, satellite-derived data on environmental conditions, like topography and land cover, the models were able to extrapolate CO₂ flux for a large area without obscuring variation across the landscape.

“[Upscaling] is incredibly important,” Dr. Virkkala says. “Previous studies have synthesized fluxes and calculated budgets by averaging across sites. While those compilations provide valuable insights, they do not account for how representative the data are, or how expansive certain environmental conditions are across the high latitudes.”

The more field sites included in the upscaling, the better the model will typically be at accurately estimating flux. The new synthesis is uniquely detailed, built upon field observations from 148 sites across the Arctic-Boreal region, including some in the more remote reaches of Northern Canada. It also averages the outputs across five separate statistical models, reducing uncertainties surrounding the estimates.

Employing these methods, Dr. Virkkala and her colleagues were able to predict Arctic and boreal CO₂ fluxes for every year between 1990 and 2015 at 1 km spatial resolution.

Ancient Carbon is Potentially Being Released as the Region Thaws

The results show that, on average, the Arctic and boreal biomes have functioned as terrestrial CO₂ sinks over this time period, and that sink is stronger in the southern latitudes—an expected outcome given the large swaths of boreal forest. According to Dr. Brendan Rogers, Associate Scientist at Woodwell and co-author on the paper, boreal forests form about one third of all forests, but they harbor nearly two thirds of global forest carbon, most of it locked in soil and permafrost.

“The reason boreal forests and Arctic tundra contain so much carbon in the soil and the permafrost is because the region has been so cold for thousands and thousands of years. Decomposition is slow. On average these systems have been photosynthesizing more than they’ve been respiring,” Dr. Rogers says.

The more surprising finding was the fact that some large areas, particularly in Northern Alaska and Canada, were becoming sources of emissions. According to Dr. Rogers, these regions hold carbon that hasn’t re-entered the atmosphere in centuries or even millennia, so the fact some of them are sources should raise concern.

“You can look at the soil profile and see ‘this carbon was sequestered 100 years ago, 200 years ago, etc.’. So the fact that our modeling has some of the regions being a source is somewhat disconcerting,” Dr. Rogers says.

Sometime in the future—could be years, decades, or centuries—the emissions from decomposing soil and permafrost thaw will start to overwhelm the sink. Dr. Brendan Rogers, Associate Scientist at Woodwell

The Future of the Arctic-Boreal Carbon Sink

According to Dr. Rogers, rising temperatures will increase the rates of both primary productivity and respiration, but not evenly. While productivity will likely plateau due to environmental limitations, respiration doesn’t have a strong upper limit, and may continue to increase exponentially so long as there is still carbon left to release. Predicting what the future of Arctic and boreal carbon will look like is highly uncertain, but Woodwell’s researchers and their collaborators are building upon this synthesis to try to bridge this gap.

There are some elements to the synthesis that Drs. Virkkala, Rogers and their collaborators hope to improve on in future iterations. These calculations, for example, don’t factor in disturbances like fire or harvest which could affect the balance in boreal forests. Improving the geographic spread of field measurements, too, could help deepen our understanding of regional dynamics.

“There are not that many sites from Canada or Russia. There are big regions where we have a poor understanding of carbon fluxes. We can only extrapolate from the data we have,” Dr. Virkkala says.

Drs. Rogers, Virkkala, and others from Woodwell are currently fundraising to build more CO₂ towers in these underrepresented regions. Woodwell scientists are also working towards a better network for methane fluxes, given its potency as a greenhouse gas, as well as leveraging different types of carbon models to reduce uncertainties. For Dr. Rogers, it’s important we study the way things are changing now, because the nascent results picked out by this study might suggest more changes to come.

“Sometime in the future — could be years, decades, or centuries — the emissions from decomposing soil and permafrost thaw will start to overwhelm the sink,” Dr. Rogers says. “Just because the region is a sink now, doesn’t mean it’s going to be a sink forever. And society will be much better off if we can predict and monitor these changes rather than realizing them after the fact – when it’s too late to change course.” 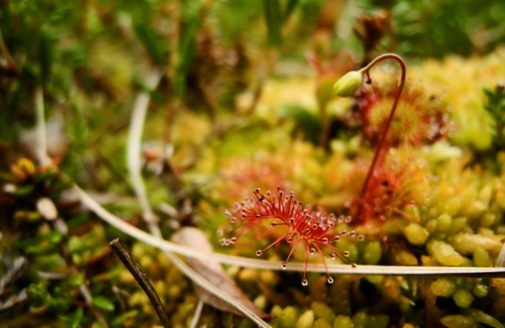 Digging deeper: Learning to appreciate the complexities of the Arctic tundra 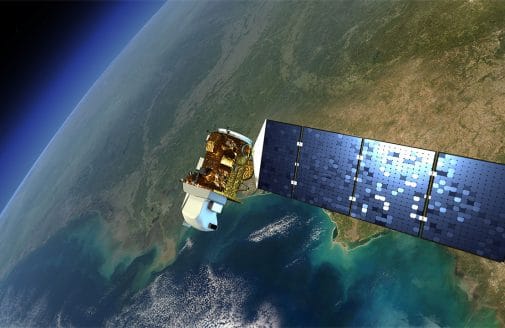 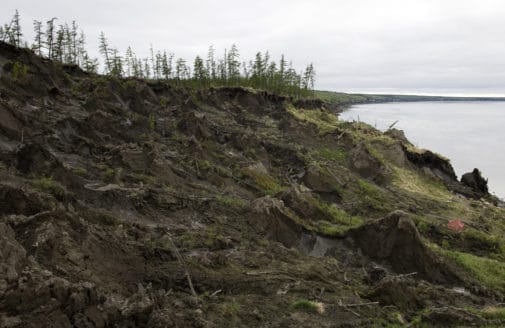